Fair fight, or brutal assault? Several days ago, Greece — and much of the world — was shocked when Ilias Kasidiaris, MP for the Neo-Nazi Golden Dawn party, slapped/punched Communist MP Liana Kanelli three times, hard, on TV. Kasidiaris, a 1.82-metre ex-military type, then ran out of the studio and went into hiding. For most the display of thuggery, cowardice and misogyny (Kanelli was intervening as Kasidiaris tried to monster another female MP, from left party Syriza) was fascism in a nutshell. But not for UK Tory-boy website Guido Fawkes, judging by its headline:

“Greek Extremists Attack Each Other — Literally”

Attack each other? Kanelli had thrown a sheet of paper at Kasidiaris, after he had thrown water at the Syriza MP. He’d then clocked her hard repeatedly. Is that a fair fight, or a brutal assault? But that is how the “respectable” Right treats fascist violence — and will do so again should the conflict come into the streets. For a leftist flinging a sheet of paper, read “marching in the street” or “occupying a building”. For a neo-Nazi punching a middle-aged woman in the face read “beating immigrants” or “knifing and shooting opponents”. Golden dawn indeed. — Guy Rundle

By dingo! Chamberlain inquest findings go global. Yesterday, after 32 years, at the Darwin Magistrates Court, deputy coroner Elizabeth Morr exonerated the parents of Azaria Chamberlain by releasing findings that it was a dingo that took the baby at a camp site at Ayers Rock in 1980. It was fodder for the Australian papers, who have often ruthlessly targeted the Chamberlains over the past three decades: 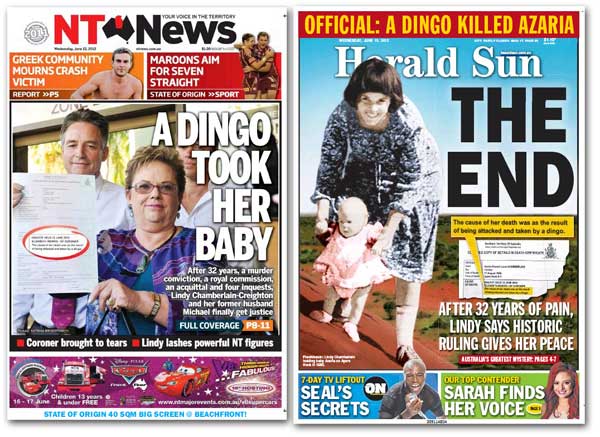 Although, in New South Wales and Queensland, it proved hard for Azaria to bump tonight’s State of Origin off the front of the Murdoch papers: 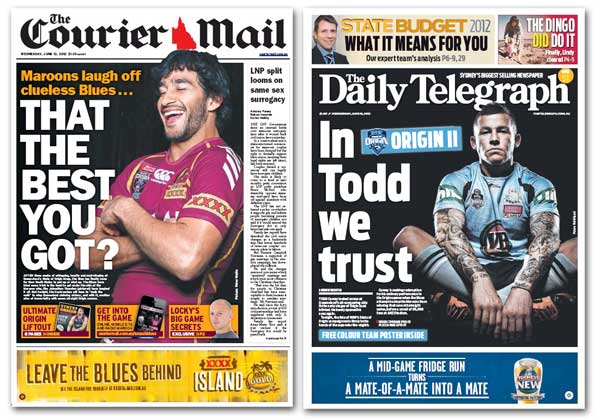 Overseas, the Azaria Chamberlain story has always attracted the interest of the international press; remember the 1988 movie A Cry in the Dark starring Meryl Streep as Lindy Chamberlain? So it’s no surprise the coroner’s report has made the world’s papers:

Meanwhile, back at home, on Sydney ABC 702 in its 7.45am broadcast today, the Azaria hype must have got past the script writer as Azaria was referred to as Lindy Chamberlain’s sister, not daughter. — Leigh Josey

Front page of the day. Another day, another escalation in the delicate political tension that engulfs the crisis in Syria: 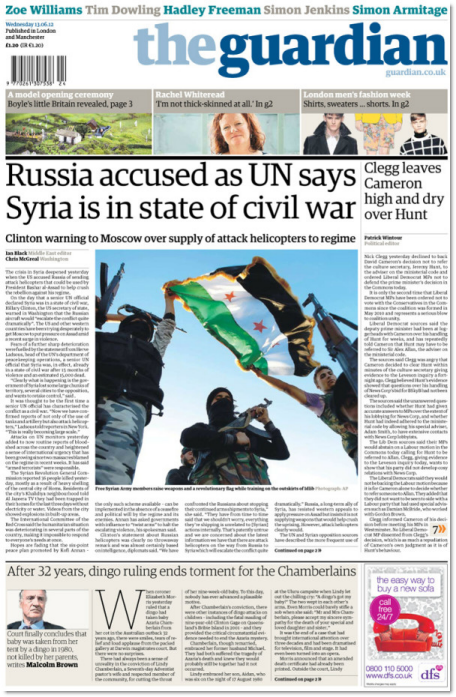 Miliband: News Corp should sell The Sun or The Times

“Rupert Murdoch’s News Corporation should be forced to sell either the Sun or the Times because the publisher’s leading market share gave it a sense of ‘power without responsibility’, Ed Miliband told the Leveson inquiry on Tuesday.” — The Guardian

“The national news agency, Australian Associated Press, has become the latest media organisation to cut jobs because of turmoil in the industry.” — NineMSN

“The Huffington Post, which has methodically spread its wings from juicy gossip about Selma Hayek’s cleavage and pointed political commentary to a Pulitzer Prize-winning 10-part series on wounded veterans, is breaking into the magazine business.” — The New York Times

“The Wall Street Journal announced today that reporter Gina Chon, who was revealed by recently leaked emails to have slept with a National Security Council Iraq expert while covering that country, has resigned.” — Gawker

“A court in Azerbaijan sentenced an Iranian journalist to two years in prison for drug possession on Tuesday in a case that his family says is politically motivated.” — Yahoo News

Chamberlain inquest: dingoes get a bad rap, it’s up to us to keep away

Crikey Worm: Centrelink pain gets worse, and the end of Sussan Ley?

“But that is how the ‘respectable’ Right treats fascist violence — and will do so again should the conflict come into the streets.” Spot on, Guy – one of the most important things you’ve written all year. Those who forget history are condemned to repeat it.