Possum: what we think about the economy

What do Australians believe about the economy? What do we believe the role is for government in our society and its economy today?

What do Australians believe about the economy? What do we believe the role is for government in our society and its economy today? Do our beliefs match our actions — or better still, are our beliefs and expectations of government even consistent from one topic to the next, let alone consistent between our broad ideals and what we actually believe when we focus on any given specific issue?

What follows is a walk through the national mindset as we have collectively revealed it to be over the past six months in polling compiled largely by Essential Research. Some of you will rejoice over what turns up, others will be horrified — all of you will probably have a chuckle at some of the paradoxes involved — yet whatever your perspective, it certainly helps explain some of the underlying dynamics of our national disgruntlement. The 30-odd poll results all have sample sizes about 1000 for a margin of error around the 3% mark.

First up — what do we see as the role of government?

Adding some texture to this and focusing on some specific policy areas: 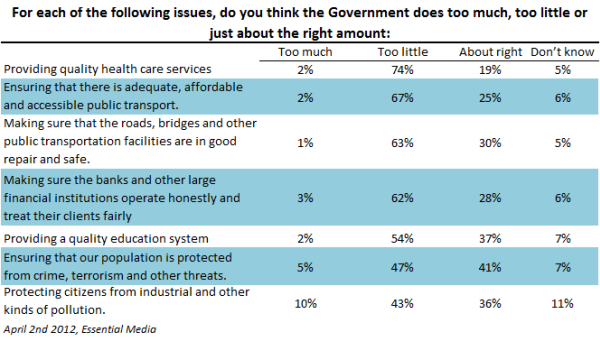 As a country, we believe not only in an active government, but we also believe that our governments are doing too little in providing the public services we demand. Health, public transport infrastructure, education — even holding banks and financial institutions to account (keep this in your thought orbit, as it will feed into some important themes later) — all show the public desire for more government action.

Yet this is where the first paradox occurs. What do we believe about the size of government?

But let’s not stop there — if government is too large, do we believe that things such as industry assistance for car manufacturing is part of the largesse problem?

Clearly not. Worth noting here is that this question didn’t ask  about current levels of assistance, but additional assistance. Support is not only strong, but bipartisan — with only Greens voters not reaching an outright majority for more government expenditure on car manufacturing.