The torrent of bad news coming out of Fairfax HQ continued this morning, with job-slashing CEO Greg Hywood announcing downgraded revenue expectations for the rest of the year. Plus other media news.

More Fairfax bad news: revenue downgrade. The torrent of bad news coming out of Fairfax HQ continued this morning, with job-slashing CEO Greg Hywood announcing downgraded revenue expectations for the rest of the year. In a statement to the Australian Stock Exchange, Hywood said he expects revenue for the second half of the year to drop by 8%. That would leave total Fairfax revenue at $500 million before interest, tax and depreciation — a $107 million revenue drop since the same period last year. The company’s share price fell to 59 cents this morning, just above the record low of 56.5 cents earlier this month.

Hywood, who sent a video to staff last week imploring them to embrace his new culture and values strategy, tried to put a positive spin on the announcement. He said his so-called “Fairfax of the Future” cost-savings drive was ahead of schedule, with the run rate exceeding the targeted $40 million in savings for the current fiscal year. He said this will continue to accelerate over coming months — a sign that more jobs could go on top of the outsourcing of 66 regional subeditors to New Zealand.

Media analyst Peter Cox told Crikey the downgrade wasn’t surprising given Hywood’s February announcement that revenue for January 2012 had slumped 7.5% below the same period last year. Still, Cox said the downgrade, and the corresponding decline in the Fairfax share price, would help Gina Rinehart in her bid to pick up a board seat. He said the mining magnate maybe tempted to increase her stake in Fairfax over coming weeks if the share price continues to fall … — Matthew Knott

Media Watch Watch. Crikey is a fan of Jonathan Holmes’ reign as Media Watch host. But it must be said our eyes glaze over a bit every time the program launches one of its news wraps and then delivers a “verdict” in the manner of an, er, unaccountable regulator. A case in point was last night’s episode, which presented a typically cogent summary of the Craig Thomson ACA/TT saga. But rather than airing its own revelation, the narrative was clearly building up to what Holmes thought about it.

In the veteran broadcaster’s book, Nine was “reasonably responsible” and didn’t deserve the full extent of the criticism it copped. Which is kind of interesting, but not nearly so much as if the show actually focused on exposing some massive black hole missed by everyone else. As Holmes said on Twitter in response to a friendly interrogator: “judge and jury, as always sir — but alas, not executioner”. We’d prefer “forensic nit picker” any day. — Andrew Crook 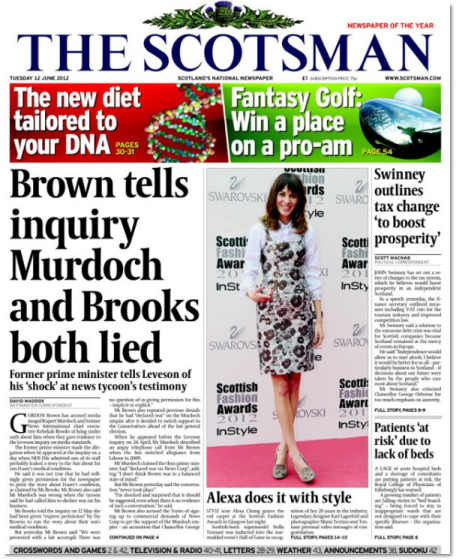 “The Twitter conversation around Australian politics is so skewed that 1 per cent of users produce two-thirds of the conversation, research reveals.” — The Australian

“Researchers Roja Bandari, Sitram Asur and Bernardo Huberman teamed up to try to predict the popularity — which is to say, the spreadability — of news-based tweets.” — Mashable

“Facebook went public last month on its prospects for growth. But in some key areas, the social network’s growth rates are already maturing.” — The Wall Street Journal

Mexican journo and her son missing

“A Mexican journalist has gone missing with her two-year-old son. Hypathia Stephanía Rodríguez Cardoso, who covers crime for the Zócalo Saltillo newspaper in the state of Coahuila, disappeared from her home on Friday.” — The Guardian

“Ghassan Tueni, a veteran Lebanese journalist, politician and diplomat who headed one of the Arab world’s leading newspapers, An-Nahar, for half a century, died Friday after a long illness, his family said. He was 86.” — AAP