Scientists only believe in the data. Time to stop shooting the messenger.

Fine British play The Heretic (currently at the Melbourne Theatre Company; Andrew Bolt is a fan) features a climate scientist under siege from environmental activists over her research. Charged by greenies as a global warming sceptic, she retorts: “I’m a scientist. I don’t believe in anything.”

And that’s the point: scientists only believe in the data. Whatever it might say, whichever political narrative it happens to support.

The heat got turned up on the climate debate and some scientists got burnt. Their rather humble but important jobs became angrily politicised, and that’s just not fair.

Today is Hug a Climate Scientist Day, an entirely silly exercise cooked up by Crikey cartoonist First Dog on the Moon. But a worthy one nonetheless.

Scientists only believe in the data. Time to stop shooting the messenger. 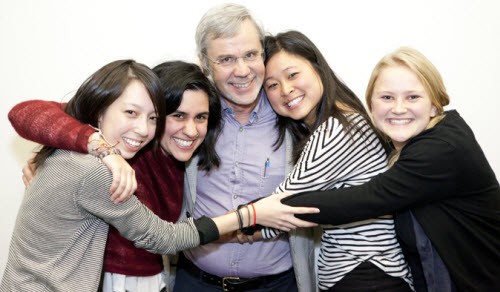 Poor form Crikey. At least you could have ensured Will Steffen was wearing the proper T-shirt during the mandatory hug.

If the scientists only care about the data, why did they have to “hide the decline”?

Any climate scientist willing to stick his/her head above the parapet deserves more than a hug with the morons of the Right out gunning for them.

Tamas, you are not a scientist and you don’t care about data. In fact you don’t know what data is. Stop pretending that your interpretation of global temperature has any scientific basis, accept that sea levels are still rising because of global temperature increase and go back to your blog where your audience understands the foreign language you try to communicate with. There is nothing for you here.

That is the way it works. When voters vote for their candidate, having been conned by the flood of advertising, and things go wrong they look for somebody to blame….other than themselves. In the political arena MONEY buys a seat in parliament. So who do you think owns the Liberal Party? Business of course, with its own party to do its bidding !! So blame the donkeys who put bad pollies into office, not the pollies many of whom are barely of average intelligence anyway.

Climate science is in a similar boat. Whilst the electorate is sold an ‘end of the world’ story from the Opposition voters look at their cost of living and try to find a convenient scapegoat. It must be the Carbon Tax to blame, orchestrated by one T. Abbott esquire. Yeah right.

We should all be thanking those hard working poorly paid scientists who are passionate about what they do. These folk for the most part do not have vested interests as do those with their own political party who work so hard at misleading an electorate which is unable to discern the facts for itself.

At the end of the day we will get what we deserve. The question is will our grandchildren deserve what we have heaped on them.