Today Tonight boss: we won’t pay hookers. Here’s some advice for any pr0stitutes keen to pick up a lucrative sum for claiming to have slept with Labor MP Craig Thomson: don’t bother going to Today Tonight. Craig McPherson, TT‘s executive producer, says his program’s Wednesday night takedown of A Current Affair for its aborted investigation into Thomson’s s-x life was all about journalistic ethics — not sour grapes.

“We don’t go looking for prostitutes — that’s the police’s job, not our job,” McPherson told Crikey yesterday. “If someone came in to my office and said they wanted to pay a prostitute for a story, I’d say ‘No way’. I’ve paid for a lot of stories but I won’t pay for that.”

McPherson says he’d only consider paying a call girl for an interview if they had “100% proof” that the s-x with Thomson was paid for on a HSU credit card. Take that those cynics who say ACA and Today Tonight are as bad as each other. — Matthew Knott

Cost of removing a casino boss: $800k. Echo Entertainment chairman John Story resigned from his position this morning following a week-long media jihad by Crown chairman James Packer. According to estimates from media buying insiders, Packer has splurged about $800,000 since last Thursday on full-page ads attacking the performance of Story and Echo — a campaign reminiscent of the big miners’ 2010 anti-mining tax blitz.

Packer wants to install his mate, former Victorian premier Jeff Kennett, on the Echo board to help him open a second Sydney casino at Barangaroo. The timing of Story’s announcement is curious given the attack ads stopped running today and Perpetual, a big Echo shareholder, announced its intention to block Packer’s Kennett play.

In a statement Echo Entertainment said, “The board of Echo has formed the view that the ongoing disruptive campaign … for the removal of Mr Story was damaging to the company, and that it was in the best interests of shareholders that Mr Story not contest the resolution.’’ John O’Neill, executive of the Australian Rugby Union, has been appointed acting chairman. — Matthew Knott

Age staff thumb nose at Fairfax. The journos’ union has hit back at an email attack from the company’s senior executives, circulating a tongue-in-cheek screed titled “so what has the union ever done for us?” to mock their corporate taskmasters.

On Tuesday afternoon, Fairfax executives Jack Matthews and Garry Linnell dispatched an email warning their own hacks not to “intimidate” or “harass” colleagues who chose to work rather than strike in support of 66 sacked subeditors from Illawarra Mercury and The Herald in Newcastle. But the heavily unionised Age newsroom hasn’t copped the critique lying down. Crikey has obtained an internal Media, Entertainment and Arts Alliance missive, that urges the grassroots upsurge to continue unabated.

“There seems to have been some suggestion since the events of last week that it is not the done thing at Fairfax for people to talk to their colleagues about joining the union. Nor surprisingly, we beg to differ,” the union writes. “For example, it would entirely appropriate to remind people that, when they see their pay go up in a few weeks time, it’s not because Fairfax just felt like it. It’s because union members fought for and won it.”

No money in online ads for US papers. The US newspaper industry has been shocked by the collapse in online advertising in the first quarter of 2012, with growth falling to just 1%. Figures out overnight from the Newspaper Association of America show that $US815.9 million was spent on online advertising on the websites of America’s newspapers. That was just $US8.08 million more than the first quarter of 2011 and was the smallest growth recorded since the impact of the recession in 2009 saw double digit falls.

It was the fifth consecutive quarter that growth has declined. Growth in the first quarter of 2011 was just over 10%, so growth has effectively all but halted. US analysts blame a surge in excess advertising space, the rise of electronic advertising exchanges that sell ads at cut-rate prices, and the continuing weakness in the US economy for the slowdown.

But more importantly, the slowdown is signalling that newspapers last source of revenue growth has, for the time being vanished, meaning there will be even greater pressure on them to restructure to cut costs. Analogue (print) advertising continues to fall in the first quarter. There was an 8.2% fall to $US4.360 billion, the lowest first quarter figure for print ad revenues recorded. A year earlier there was a 9.5% fall to $US4.75 billion. All three groups of print ads, national, retail and classified, showed falls

From first quarter and other reports, the decline has shown up at The New York Times, which saw a 2.3% fall (to just over $US48 million) in revenues at the websites nytimes.com and bostonglobe.com. The Wall Street Journal saw a 7% fall to $US24 million at the paper’s website and the online magazine Slate.

The revenue data supports the comments last week from ratings group Moody’s, which said the US newspaper industry’s outlook “negative” because of the “relentless” declines in overall revenue. “At this point, there is no evidence digital strategies are returning most daily newspapers to positive growth,” wrote Moody’s senior credit officer John Puchalla. “It is merely a way to moderate revenue declines.” Total first quarter ad revenues for the US newspaper industry fell 6.8% to $US5.176 billion, the lowest overall quarterly figure recorded. — Glenn Dyer

Compare and contrast of the day. We’ll leave it to you, dear reader, to judge whether today’s NT News gave appropriate coverage to the reports that 100 people were killed in central Syria at the hands of government militia this week compared to, say, the news that a dog — sorry, celebrity dog — died: 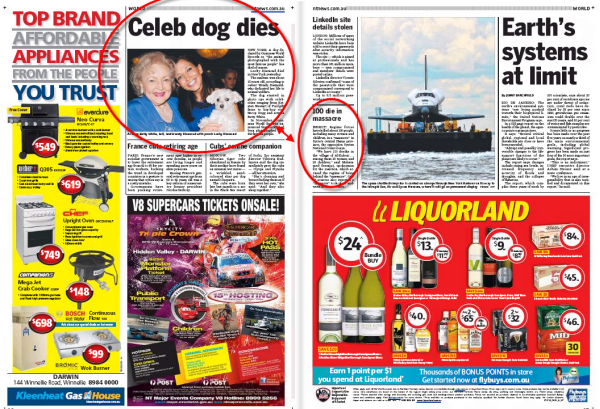 Front page of the day. Today’s i newspaper from the UK covers the latest Syrian massacre: 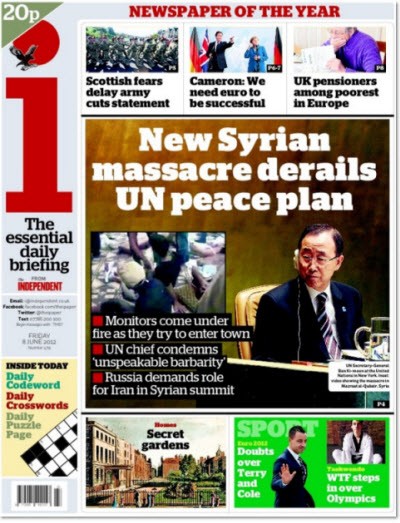 “Fairfax Media’s regional division has announced it will launch a new social media site later this month targeted at women who live in regional and rural Australia.” — The Australian

“The Huffington Post has partnered with Spanish newspaper El Pais to launch El Huffington Post, a Spanish edition of the US news and blog website.” — journalism.co.uk

“In a social media universe, where anyone with a smart phone can ‘file’ and ‘publish’ a story for a global audience, complete with pictures and video, does that definition or distinction mean anything to anyone — except, of course, professional mainstream journalists, who are jealously guarding their turf? It turns out that the Alberta Court of Appeal may have a partial answer.” — Edmonton Journal

TT : “Sour grapes? Or currants?”
It’s not like Thomson was ambushed, filmed and hog-tied outside a gay sex club, is it?

The headline ‘TT takes high ground…’ had me laughing almost as heartily as when reading a First Dog cartoon.

Too true Zut their claiming that “high ground” – and achieved too late for David Campbell?

[Like Frank Zappa did he “Wind Up Working in a Gas Station”?]