How Victoria puts you through the FoI wringer

Environment Victoria put in an FoI request to the Victorian government in December. So why was it released to the Herald Sun the day the group was expected to finally received the FoI-ed documents?

Environment Victoria made a freedom of information request on December 15 last year. We sought documents relating to the state government’s proposed allocation of billions of tonnes of coal to private companies, in particular correspondence with a company called Exergen who are the most aggressive lobbyists for a new coal allocation (the last coal allocation failed dismally). We also sought policy advice and correspondence between Energy Minister Michael O’Brien and Department of Primary Industries on decisions to make wind farms harder to build in Victoria and decisions to slash support for households and businesses who want to install solar power.

Having been through the wringer before on FoI requests in the past, I expected the government to drag its heels processing the request. Our lawyers at the Environment Defenders Office (EDO) warned us that FoI has been going from bad to worse in Victoria and that we were going to need to be patient. However nothing could prepare me for the tortuous process that we’ve been through so far and that is still not complete.

First, DPI failed to process our request in the mandatory 45-day limit, so with the assistance of the EDO we lodged an appeal at VCAT against its “deemed refusal” to make a decision. Then we entered into good-faith negotiations with the department to narrow our search. Then, because a significant number of documents were involved, we agreed to their scheduled release, the Exergen correspondence and wind policy documents were to be released on Friday, June 1, and the coal allocation and solar documents on June 15.

So imagine my surprise on June 1 to see the front page of the Herald Sun plastered with a story about the report we’d requested, the day that we were due to receive the document. Clearly, the Baillieu government had decided to get on the front foot by providing the story to a friendly outlet that a coal jobs bonanza awaits. The Herald Sun went big on the story with a front page plus an editorial welcoming coal exports and claiming that “Victorians will be reassured by a project likely to lead to a surge in economic activity across the state”. 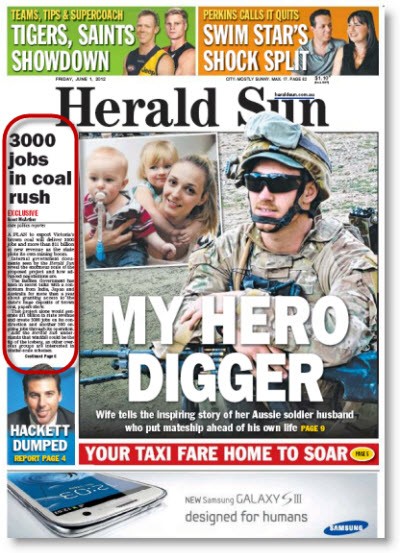 When I eventually got some of the documents at 2.30pm, 24 hours after the Herald Sun, it was clear that the journalist had only received one of the documents — the piece of economic analysis commissioned by Exergen to spruik its project and make the case for the Baillieu government to give it 1 billion tonnes of coal. It seems that it didn’t get the email correspondence that highlighted that not only does Exergen want the state government to give it 1 billion tonnes of coal, it also wants Victorian taxpayers to pay for its new mine or power station, in the form of a grant from DPI.

So not only did O’Brien attempt to control the story, he also selectively released the facts. It’s astonishing and concerning that proper processes for the release of FoI documents are treated with such disdain by the Baillieu government. 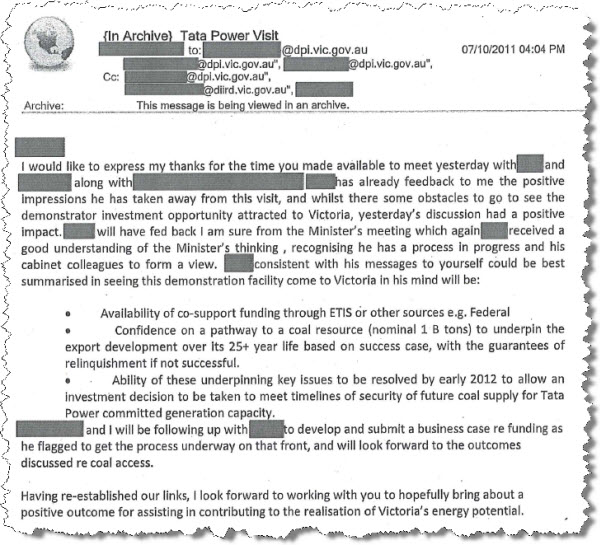 To the Herald Sun’s journalist’s credit he did do a small follow-up story the next day when it was clear he had not got the whole story, though it hardly counterbalanced the previous day’s exuberance in the paper.

Most documents relevant to the FoI search were not actually released by the state government. Environment Victoria eventually received 19 out of 66 pages of relevant documents. None of the wind policy documents were released, which hardly inspires confidence in the accountability and transparency of the decision making process that has made it harder to build a wind farm than a coal-fired power station in Victoria. A number of letters from Exergen to O’Brien were released, but no letters written by the minister saw the light of day.

These issues are clearly in the public interest. Surely Victorians have a right to access documents that will determine whether we either become an exporter of dirty brown coal to the world, or a major generator of wind power. Residents of the Latrobe Valley have a right to know how many new coal mines are proposed for the valley and Western Port Bay communities should know what infrastructure and ports are proposed for their bay. We will regroup with our lawyers and decide whether to appeal the process and decisions at VCAT in coming weeks.

However, Victorians with an interest in open, transparent and accountable decision making from their government should be worried, very worried.

Baillieu govt one year on: a ‘let ‘er rip’ approach to environment

Greenies hit out at secrecy over Victorian power plant

This story is one of the main reasons I love Crikey (apart from Mr On The e Moon, of course). We need independent media to publish pieces like this.

More power to you, Environment Vic and Crikey!

classic that the herald sun would run with government propaganda on page one and editorial but miss then relegate the rest of the information to a small relatively hidden story. News Inc once again lives up to it’s outstanding reputation of distortion.

I have much sympathy for Mark’s experiences in the ‘FoI wringer’ but there’s really nothing new in the treatment he’s received from the Victorian Government. As a reporter, I first encountered the FoI dudding technique with the Cain Government in 1989, just five years after the FoI Act was enacted. My newspaper had sought under FoI the salaries and employment contracts of the CEOs of several Melbourne public hospitals and, in the test case, the AAT ordered the Royal Women’s Hospital to release the information. However, before we received the documents, the information was passed by the Labor Government to The Age where its medical reporter (I vaguely recall the reporter was Michael Pirie) wrote a very soft story that essentially buried the newsworthiness in the information and dudded our months of legal work in the FoI process. The Health Minister at the time was Caroline Hogg.

Baillieu is a deceptive hypocrite who has received an armchair ride from the media so far with more non core promises broken than Gillard with none of the mock rage in the coverage.

All the while putting up all possible hurdles to alternative energy sources
and welding us to a polluting technology developed in the 1880’s.

The Victorian Liberal government is an example of what to expect at the federal level with a coalition government. When the next federal election arrives, beware of Tony Abbott and his insperational promises and non-written promises.