From the Crikey grapevine, the latest tips and rumours … Qantas staff hate their jobs. A memo from the Qantas Chief Pilot concerning staff “engagement” in the carrier, leaked to Crikey‘s aviation blog Plane Talking, shows considerable evidence of dissatisfaction in those who participated: “Message from the Chief Pilot — 2012 Engagement Survey results (04/06/2012) “The last 18 months […]

Qantas staff hate their jobs. A memo from the Qantas Chief Pilot concerning staff “engagement” in the carrier, leaked to Crikey‘s aviation blog Plane Talking, shows considerable evidence of dissatisfaction in those who participated:

“The last 18 months have been difficult and this was reflected in Flight Operations’ 2012 Engagement Survey results. Fewer Flight Operations employees responded to the survey (48 per cent compared to 64 per cent in 2011) and overall engagement is lower.

“Among Flight Crew, we have seen declines in all question categories that can be compared to last year, and declines in all question categories compared to Qantas overall. The most significant gaps between Flight Crew and the Qantas average are in the areas of overall engagement, communication, Qantas values and behaviour, customer experience and competitive position.

“In the context of the past 12-18 months, a decline in engagement was not unexpected.

— Read the rest at Plane Talking.

Sackwatch: Fairfax firing continues? Rumours of more Fairfax redundancies on the NSW far-south coast with word that one journalist will go at Merimbula News Weekly and one administration position will be cut from Narooma News. With eight newspapers in the area there’s also talk of amalgamating some of them.

Rehiredwatch. “Having listed Hastie in your Sackedwatch, will Crikey now publish a ‘Rehired Watch’ following the rehiring of over 1200 plumbers?” asked one indignant reader. Well, we didn’t actually put that Hastie job cuts news in Sackwatch to begin with — perhaps you’re referring to this Glenn Dyer story from May 28?  According to Workplace Minister Bill Shorten this morning, Hastie employed 1400 plumbers and 1275 of them will now keep their jobs. That’s still 125 plumbers who lost their jobs …

Resuscitation required in the NSW Health ministry. We hear that NSW Premier Barry O’Farrell is reviewing his team and the Minister for Health Jillian Skinner is under the spotlight. Major health funds are receiving numerous complaints that patients being admitted into public hospitals as private patients and being paid for by the funds are not being treated accordingly as private patients and in the complainants’ opinions are receiving substandard medical advice in the public hospitals, claims a NSW health insider.

“The private health funds have commenced their own research and are reviewing their own data as a more trustworthy source of information and may commence their own standards review for each public hospital. It looks like Jillian Skinner has been caught napping and the first hospital being investigated will be a big dumper,” an anonymous tipster tells Crikey. But is this just rabble rousing from the opposition? If you’ve got inside knowledge on what’s happening in public hospitals, please email us or fill in our confidential tipster form.

RMIT asks staff to fund the uni. The vice-chancellor of RMIT University emailed university employees this week attempting to solicit donations (click through to view the whole email): 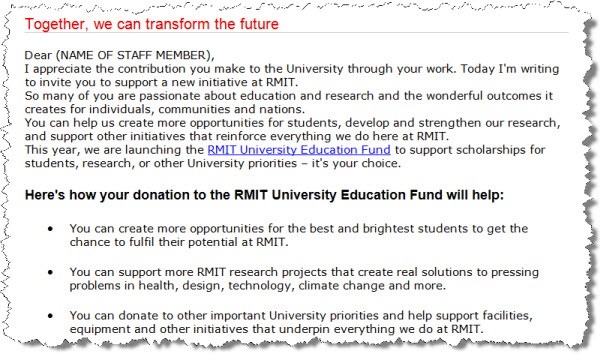 “This is coming from a university that made a $55.3 million dollar profit in 2011,” noted a staffer. In a move the staffer called “even more bizarre and shameless” the university offers a staff payroll giving option, where staff can have a donation to the university taken out of their pay fortnightly.

“Although, the provision of additional scholarships to disadvantaged students is a great idea you’d hope that the uni could access some of the funds from its coffers if more scholarships were needed, and the other donation areas are suspect at best,” said the RMIT employee. “The mere suggestion that staff should consider donating to their own employer to help it to have some level of social conscience is deplorable.”

Buzz gets swatted. Buzz Insurance (run by IAG which also own NRMA Insurance, SIO and SGIC) customers received an email yesterday explaining that Buzz Insurance has been shut down. Buzz will be honouring current policies, but not offering any new ones. You can read more about it in a statement on its website.

Myki pain continues for Melburnians. A public transport user and Crikey reader shared a most infuriating story about attempting to replace a defective Myki card:

“My Myki, which is at most 18 months old, seems to have reached the end of its life already. I hear on the Twitters (sic) that I’m not alone in this.

“The replacement process is bloody stupid. If you have a defective card, you can’t just go to the Myki website and click a button that says ‘Send me a replacement card’. No, you have to print out an out-of-date paper form, downloaded from the website. Which wants your credit card number for a since-abolished replacement fee of $9.80. You have to then send it, with your defective Myki. The replacement takes at least four weeks, during which you’re without your Myki and presumably have to fork over for daily metcards (Did I mention they’ll only replace it if it does indeed turn out to be defective?).

“I had a bizarre conversation with a women from the Myki office, who called me when they finally got around to looking at my form. I’d sent it in without my card, because it was still marginally working. She encouraged me to lie and tell her that in fact I’d lost my card, and then she could send me a new card straight away! Trouble is, at that same time she would have to hit the “kill” switch on my existing card, leaving me no way to get home!

“I’ve worked with RFID cards in the past, which is what the Myki card appears to be. There’s really nothing to them, a tiny chip and an antenna. No moving parts, no battery or anything to wear out. I can’t understand why they don’t have a lifespan of years and years.”

Want to share your public transport war stories? Email Crikey with any other Kafkaesque tales.

Kathy Jackson headlines IR conference. Get ready for next Tuesday’s event hosted by the HR Nicholls Society, the industrial relations think tank. This year’s theme for the 32nd conference is Cost, loss and disruption: Another year of the Fair Work Act and the after-dinner conference speaker will be none other than Health Services Union national secretary Kathy Jackson.

Bodies left in lifts. And this creepy tip from the 3AW rumour file this morning:

“Caller Lift Well says there is a rumour that a Melbourne hospital has found bodies twice in the last few weeks. He says the rumour is that one was found in a lift well and had been there for about four weeks, and another was found after about eight weeks. “

Unfortunately the person who claims to be a colleague at RMIT, who courageously refuses to identify themself, has no spirit of charity, hasn’t even an elementary understanding of university finances and fails to understand fundraising.

RMIT’s net surplus was 6.5% of revenue in 2011. While this is better than a deficit it is hardly extravagant. That financial buffer will be needed to cope with a continuing fall in international student enrolments and the Victorian Government’s cut to the university’s Tafe funding, which the university estimates to be about $20 million per annum. And it would be nice to have some funds to further improve the university’s facilities.

Universities are rightly enjoined to seek support from philanthropists and alumni. That support is much more likely to be forthcoming if the university can demonstrate that its own staff support the causes for which it seeks support. RMIT was founded on philanthropy and it would be good for colleagues to enlarge upon that tradition.

Payroll deductions to the university’s education fund or foundations make donations very convenient and staff receive a tax deduction each pay, rather than having to wait until the end of the tax year.

For completeness I disclose that RMIT currently features me in its staff giving web page.

rmit sent that? i suppose i should start reading the staff emails (student here)

It may be a sign of the times that a major educational institution such as RMIT feels the needs to solicit donations from its own staff. If this is a matter of survival, it is understandable. However, although the assets are not liquid, RMIT’s cash flow and real estate portfolio would suggest that this is not the case.
The first poster above, who appears to hold a senior position within the university, makes some good points in reaction to the overly emotive language of a clearly upset employee. However, although universities do have a need to seek support from philanthropists and alumni, I expect that the good work and commitment of the university staff would sufficiently demonstrate their support. If some staff members find that they have excess funds and wish to donate to the university, I imagine they would do so without solicitation of this type.
This solicitation is a questionable initiative on the universities part and has the dangerous potential to cause division and enable a system of favouritism through the development of a culture that favours those that are willing to take pay cuts masquerading as financial contributions over those who are talented or competent. I wonder if these dangers were considered prior to the commencement of this initiative.

The whole point of donations is to go beyond one’s normal duties to do one’s job, pay taxes, etc. Staff giving is an important demonstration of their extra commitment to the university’s benevolent goals.

It will be noted that many of these universities are Australia’s wealthiest.

The suggestion that university managers would favour staff donors is outrageous. Staff donors get a regular newsletter and are invited to the annual thank you event along with all other donors. However, many staff donors choose to remain anonymous because of the embarrassment of appearing to be ostentatious, and reflecting the strange aversion to normal people giving as part of their normal activities evinced by Crikey’s piece and some of the sympathetic posts.

The previous posters observation that “staff giving is an important demonstration of their extra commitment to the university’s benevolent goals” reinforces concerns that this could lead to a culture of favouritism at RMIT not based upon merit, but upon extra commitment purely shown through financial returns to the university. I was concerned that this was an outside possibility, but perhaps it is more likely than that. It would also be reckless to assume that any donations made toward a cause as grey as ‘other university priorities’ are to be used for entirely benevolent goals. This should be more clearly defined to ensure staff are informed of where their money is going.

I would also just like to point out that I have no objection to enabling university staff to make donations as it is entirely their business. The concern lies with the solicitous nature of the correspondence, particularly due to power imbalances. Staff receiving a piece of correspondence from the Vice Chancellor could feel unduly pressured to contribute. Some may even feel obliged, lest they should be seen as lacking commitment.

As to the observation that other universities have taken this course, unfortunately the ‘they did it why don’t we do it’ lemming type mentality does not legitimise the initiative in any meaningful way. I imagine some other universities have considered such an option and decided against it, possibly as they judged such internal solicitation to be inappropriate.