Power prices are plunging, but only for a chosen few

It might come as a shock to many to learn that wholesale electricity prices are at their lowest since the introduction of the national electricity market more than a decade ago. Giles Parkinson of RenewEconomy reports.

Given that our entire political debate seems to be centred around the cost of living, and much of Tony Abbott’s election plan rests on a campaign against rising electricity prices, it must come as a shock to many to learn that wholesale electricity prices are at their lowest since the introduction of the national electricity market more than a decade ago.

You could be excused for not noticing. The way the market works in Australia, dominated as it is by vertically integrated companies that act as oligopolies all along the value chain, low wholesale electricity prices have not been reflected in retail costs, and because there is too much money being spent on upgrades and expansion of the grid — essentially the poles and wires.

But you’d have to ask yourself, what for? Demand for electricity is falling, and it is falling fast. Not like a sharemarket, which lurches from one extreme to another with double-digit percentage movements, but by enough to cause all our major energy players to rethink their 20-30-year investment horizons, and for others to wonder if the NEM, as constructed, is serving a useful purpose.

Still, the graphs below, prepared by professor Mike Sandiford, from the Melbourne Energy Institute, are dramatic enough.

The first one shows the reversal in demand and prices in Victoria: 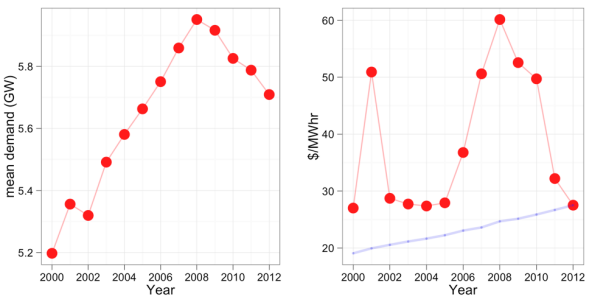 Then we have NSW. Look at the fall in average wholesale prices: 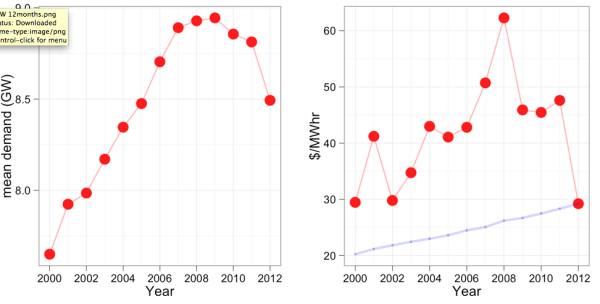 And then we have Queensland:

The slump in demand is being caused by a range of factors: reduced demand by lower manufacturing output; reduced demand from efficiency measures or the response to rising electricity costs at the consumer end; mild weather in some years; and the growing impact of renewables — largely due to the massive deployment of wind energy in South Australia, and to a lesser extent the reach of solar PV.

Demand is already about 10% below where it was expected to be four years ago, when energy regulators and operators assumed an average annual growth of 2.2%. The industry is awaiting with interest the upcoming forecasts from AEMO, which is preparing to public its latest demand forecasts at the end of this month, with talk that several gigawatts will be lopped off the near-term and medium-term forecasts for the NEM (which includes the eastern states but not WA or the NT, or Mount Isa and other areas).

Those estimates could be exacerbated with the announced closure of the Kurru Kurri smelter in NSW, and doubts about the future of other smelters in Victoria. Sandiford’s estimate is that demand in the NEM is falling by around 800MW a year.

He prepared this graph to illustrate how expectations of rising electricity demand (purple line going up) of around 2% per year have been superseded by the reality of falling demand of around 1% per year. Viewed like this, demand is 3% below expectations per year over the past four years.

“That is several large coal-fired stations we don’t need,” Sandiford says, wondering why the federal government should be providing compensation to prevent their closure, yet spending more money to ensure others do close. It’s not the carbon price that is threatening the business models of these generators, it’s demand reduction that is killing them because the product they are selling is no longer wanted (or needed). This much was made clear by analysts who looked in detail at AGL Energy’s purchase of Loy Yang A power station — the nation’s largest. 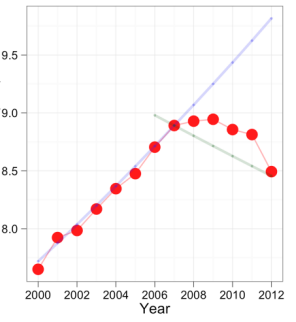 This helps explain why utilities such as Origin Energy, AGL Energy and TRUenergy say there is no case for new baseload before 2020. Apart from needs in Queensland, where a new coal mining province is hungry for power, it may be longer than that. The 20% renewables target is also reducing the need for new fossil fuel generation — which is why some, such as Origin Energy, are looking for the RET to be diluted, or adjusted to reflect a percentage of actual demand, rather than a set gigawatt hour target (41,000GWh by 2020). That debate may well intensify when AEMO releases its final projections.

One of the great deficiencies of the NEM is that it is focused only on delivering the energy with the cheapest short-term marginal cost of production. The NEM is ill-suited to recognise the benefits of energy storage, distributed generation, or even the benefits of energy efficiency. As demonstrated by revelations in The Guardian this week — about a utility-inspired push by the UK government to dilute renewable energy, energy efficiency and carbon abatement targets — utilities are finding it hard to move from a world where the overriding motive is simply to sell more electrons.

The NEM also appears ill-suited to the day when renewables take on a greater share of the market — and where the common notions of baseload and peak-load generation (which the NEM is designed to enshrine) are blurred by new concepts of dispatchable and non-dispatchable energy. This is particularly important as renewable technologies such as solar thermal are developed with storage.

Sandiford suggests that it is time to develop a new market design. The NEM has already been criticised for failing to cope with environmental factors, and the growing merit order effect means that it will be poorly equipped to deal with the growing penetration of renewables.

“None of this is being passed through to the customers,” Sandiford says. “And it is not encouraging the adaptation of the energy sector (to low-carbon technologies). So you would have to ask yourself, what is the point of the market? Is it just a charade?” As it happens, Sandiford’s team is about to embark on a project to analyse other market designs and formulas. Their conclusions should be interesting.

I wonder how much the drop can be linked with all of the energy efficiency measures being promoted by governments around the country over the last few years.

A few years ago, Brisbane council was offering a free service to replace all your lightbulbs with CFLs, and install a smart meter that let you monitor your electricity usage in real time.

Also, I recall there was an epidemic of pink batts around 2008 as a result of Rudd’s stimulus spending. Notice the sharp drop offs in NSW and Vic from 2008 onwards.

Drop in demand, increase in efficiency measures, or both?

Probably both, Jeebus. In response to higher power prices, there are few people who can afford to ignore the cost. It’s remarkable how much you can save once you start looking at your situation. It’s a bit like high petrol prices making you look for alternatives.

http://www.onepersoncan.org helps you keep track of your power use, and offers some excellent tips on reducing it (including some I hadn’t seen before).

Jeebus, one of Can Do Newman’s early decisions as premier (apart from abolishing the Premier’s Literary Award) was to kill off the ClimateSmart Home Service.

Our car number plates boast: Queensland, the Smart State. We should sue him for false advertising.

In other words, between profit gouging and spending on 19th century poles’n’wires technology, a perfect example of an industry refusing to face the new world & possibilities. Gotta lurve the tory cuts to energy saving schemes.