Possum: the polling state of play in June

If you’re wondering what the hell is going on lately with the polls being all over the shop, the time is ripe to run our trend measures to get a better grip on it all.

If you’re wondering what the hell is going on lately with the polls being all over the shop, the time is ripe to run our trend measures to get a better grip on it all and maybe knock a few myths on the heads about what is actually happening with Australian political opinion.

First up, the two-party preferred results: 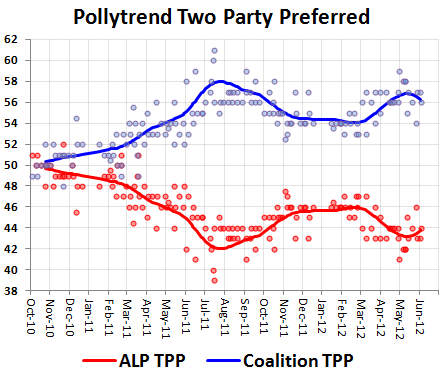 Over the past three months or so we’ve witnessed a gradual decline in Labor’s two party preferred, with that four-month strong flat-lining of 46/54 to the Coalition finally coming to an end in the last week of February. Between March and mid May the ALP experienced a three-point fade in the two party preferred vote — running at about a one-point loss a month — followed by a slight one point recovery over the past three weeks or so.

Of course, that’s not nearly as exciting as some have put it in our absence — so if you prefer your polls with a little more histrionics and generous dollops of SHOUTY farce, let’s have a quick recap (click to expand): 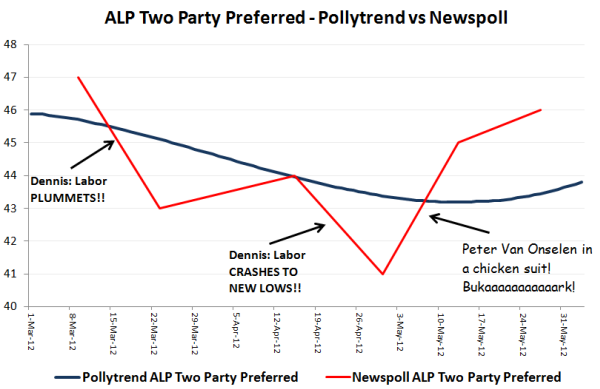 Ahem … quite. On the primary vote front, the Coalition picked up nearly three points between March and mid-May, going from around 46 at the beginning of March, up to a touch under 49 in mid-May — before pulling slightly back over the past few weeks to be sitting on 48.5. 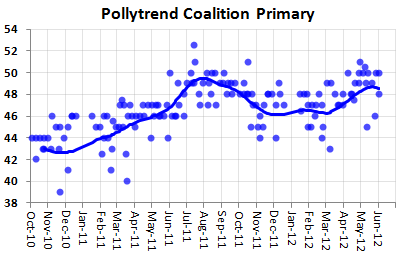 The story for the ALP primary has been a little heavier, with the primary vote sliding from 33 at the end of February down to 29 in mid-May, before recovering to around 30.5 over the past few weeks. 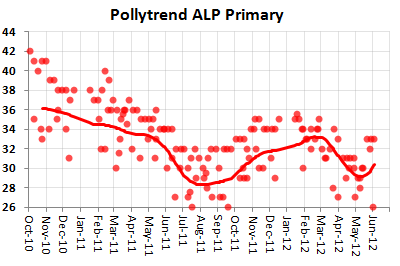 Meanwhile, the Greens vote appears to be following some strange five-month cosmic cycle from peak to trough, picking up a point over the past few months to be sitting on 12. 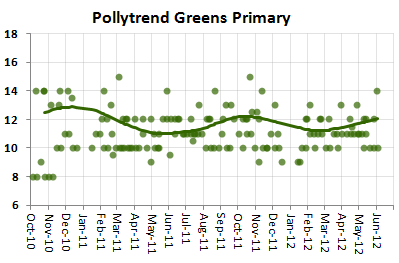 The actual trend point estimates as of today come in like this:

Also worth mentioning is that broad menagerie commonly known as “others” are currently rounding up the difference at 9.1%, which is a 2.4% swing towards that group since the 2010 election.

What are Australians afraid of?