Is it the economy, stupid?

If in politics "it's the economy, stupid" really is the dominant factor determining the standing of a government, how come Labor is travelling so poorly?

Why is it so? If in politics “it’s the economy, stupid” really is the dominant factor determining the standing of a government, how come Labor is travelling so poorly?

The national account figures released this morning by the Australian Bureau of Statistics show Australia doing far better than almost the whole of the rest of the developed world. Here are the latest figures from the OECD website with Australia’s 4.3% for March added: 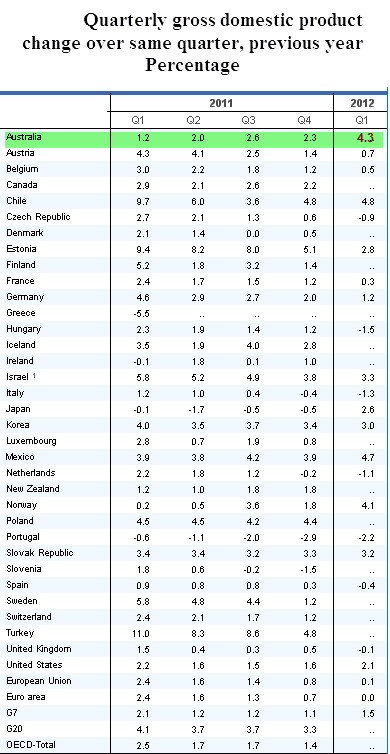 And the key details from the ABS release: 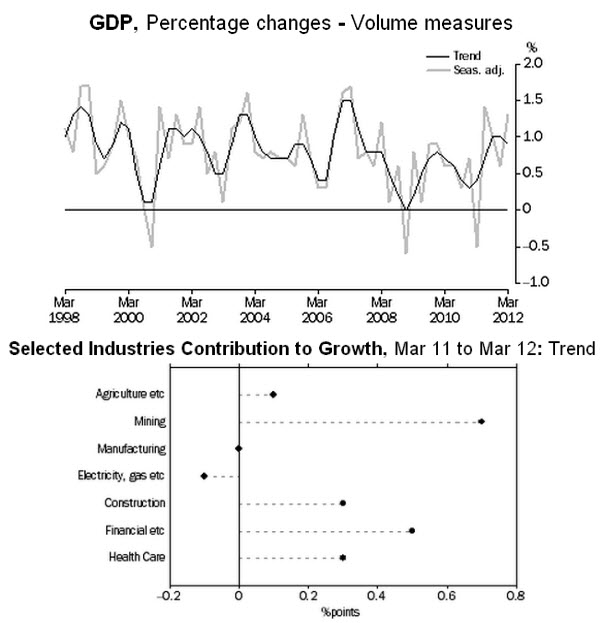 Perverse democracy. I notice a few comments on one of yesterday’s snippets so a brief clarification. A government gets elected having solemnly promised not to do something. It promptly breaks the promise and does it.

The other side then makes a promise to repeal the change its major election policy pledge and wins. The defeated government uses its numbers in an upper house to stop the new government doing so. Perverse democracy indeed.

Forget the psychiatrist’s couch, just get on the phone. Telephone therapy, it seems, can be more effective in treating depression than actually visiting the therapist. According to research published in the Journal of the American Medical Association the reason is that patients who had therapy sessions provided over the phone were more likely to complete 18 weeks of treatment than those who had face-to-face sessions.

“Among primary care patients with depression, providing CBT (cognitive behaviour therapy) over the telephone compared with face-to-face resulted in lower attrition and close to equivalent improvement in depression at posttreatment. At six-month follow-up, patients remained less depressed relative to baseline; however, those receiving face-to-face CBT were less depressed than those receiving T-CBT. These results indicate that T-CBT improves adherence compared with face-to-face delivery, but at the cost of some increased risk of poorer maintenance of gains after treatment cessation.”

A government gets elected having solemnly promised not to do something. It promptly breaks the promise and does it.

A government gets elected (with the support of some MPs who promised to do the same something) having solemnly promised not to do something. It promptly breaks the promise and does it.

Not quite so clear.

Great to see the Vatican doing something good for a change!

“A government gets elected having solemnly promised not to do something. It promptly breaks the promise and does it.”

More bizarrely, the leader who promised not to do something, then
brags that one of her crowning acheivements was to do what she had
previously promised not to do, when challenged for the leadership
by a previous leader who appears to have actually had a mandate to
do the equivalent when previously elected, but was stopped from
doing so by the opposition, who at that stage had no mandate to stop
him from carrying out his promise.