Abbot takes the lead off Gillard

Opposition Leader Tony Abbott takes the rare honour of displacing PM Gillard from our top position this week following a series of events the ALP linked to the return of his Dr No tag; making headlines for his failed sprint to the parliamentary exits, coverage of posters in Health Minister Tanya Plibersek’s office depicting him as homophobic and racist, and likening the carbon tax to a “python squeeze”.

Indeed, accusations of unengaging leadership levelled at both major parties were supported by the latest Nielsen polling which shows former opposition leader Malcolm Turnbull (charging up our charts faster than Abbott bolting for the doors) and former PM Kevin Rudd to be the preferred leaders of their respective parties and — despite little media presence from either — coverage around them has risen sharply.

Meanwhile Defence Minister Stephen Smith flew north on a diplomatic offensive to meet his counterpart in Beijing for a pow wow, while Treasurer Swan sailed up our list as interest rates went down. 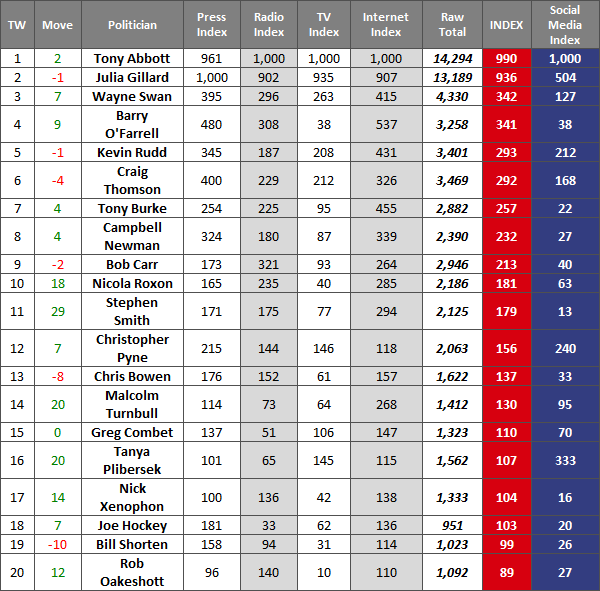 Tony Abbott provided much ammo for social media writers this week with the aforementioned events.

Her Majesty was rumoured to have smiled over the weekend, as populist support for her returned to historical highs when she celebrated 60 years on the throne (with nary a newspaper in sight).

The trouble with Kevin