Sydney’s Daily Telegraph has been mauled by the nation’s trusty media watchdog, the Australian Press Council, but come away with barely a scratch. What a surprise! Six months ago, the paper ran a huge front-page headline — “OPEN THE FLOODGATES — Exclusive: Thousands of boat people to invade NSW” — followed by another horror headline inside, which […]

Sydney’s Daily Telegraph has been mauled by the nation’s trusty media watchdog, the Australian Press Council, but come away with barely a scratch.

Today, the Murdoch newspaper has published the Press Council’s adjudication of a complaint about the article, and buried the watchdog’s biting criticism on page six, under the eye-glazing tag: “Press Council makes ruling on headlines”. 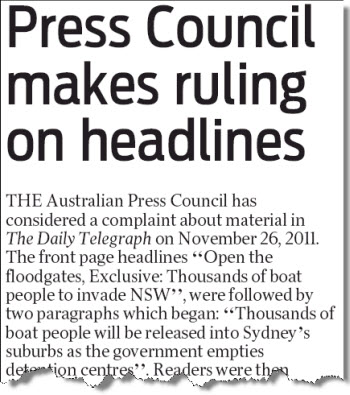 That sure ain’t how the Tele‘s subs would be selling the story if they wanted anyone to read it. So here’s how we suggest it should have been done.

This way, you might well discover that the Press Council regarded the Tele’s treatment of the story as “an especially serious breach of its principles”. You might also discover it had branded the paper’s choice of the word “invade” as “gravely inaccurate, unfair and offensive, because of its clear connotations of forceful occupation”. And you might find it had ruled that “open the floodgates” and “deluge” were also “inaccurate and unfair”.

Press Council rulings don’t come much tougher than this one, but it has got one-tenth the punch of the original story. Surely, the very least the watchdog should demand is that the ruling be carried on the front page, where the original offensive headlines appeared?

Last year, Tele editor Paul Whittaker told me he would be sure to advertise any such Press Council rulings. “You have to run it prominently, you can’t hide it in the classifieds,” he said. “If we make a mistake we’ve got to apologise … If we want to be taken seriously we’ve got to take the Press Council seriously.”

But we think he could try a great deal harder than that.

And, by a stroke of good fortune, he will have the chance tomorrow, because the Telegraph will be publishing yet more Press Council criticism. This time it will tackle the Tele‘s tireless campaign against Sydney’s lord mayor Clover Moore, which the council says displayed “unfairness and imbalance” and breached the council’s principle requiring “fact and opinion to be clearly separated”.

The Moore complaint referred to 17 articles from 2011 whose headlines and copy were spattered with phrases such as: “Ms Moore’s war against cars”, “crazy council policies”, “bike paths disaster”, “junket”, “jaunt”, and a “diva-like list of demands”.

“It just never stopped,” the complainant, Stephen Pate, told Crikey. “Every day there was another attack, and almost all of them were misleading.”

Pate is just an “ordinary member of the public” with no ties to the lord mayor, apart from having voted for her and once given money to her campaign. So why did he complain?

“I just got sick of it,” he said. “I get so frustrated with the way the Telegraph reports everything, and I don’t think it’s in the public interest the way they mix up news with opinion.”

Pate was curious to note how the NSW Liberal Premier seemed so keen to follow the Tele‘s lead. After the paper attacked Moore for remaining an MP while lord mayor, Barry O’Farrell announced he would change the law to make this impossible. And the day after the Tele ran a front page about Moore’s bike paths and transport plans for the CBD, O’Farrell moved to take away the council’s planning power by creating a new transport committee, he claims.

“It just shows the ongoing influence of News Ltd on our politicians,” he says.

So does he think the Press Council ruling — which won’t make front page tomorrow under the banner headline “An apology to Clover Moore” — will achieve anything?

“Probably not a lot,” he said, “they’re an arrogant lot at News. They think they’re right. But it’s the only avenue you’ve got.”