As the slow tightening in China cuts growth, Macau gambling revenues hit their lowest rate of growth in May since July 2009.

This graph from US website Also Sprach Analyst helps explain James Packer’s excitement about Echo Entertainment and its casinos in Sydney and Queensland. The growth in gambling revenues in Macau is slowing, as the Chinese economy slows … 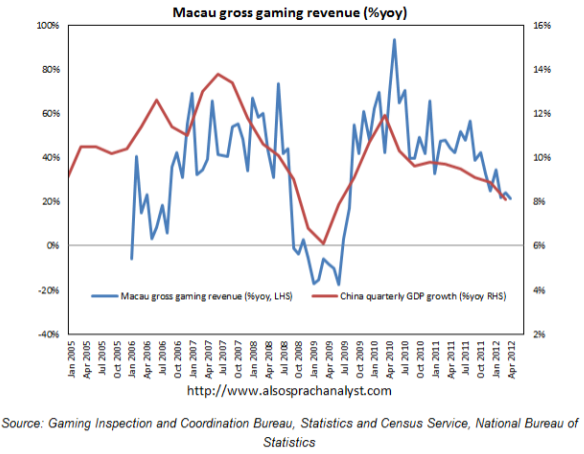 In fact, as the slow tightening in China cuts growth, Macau gambling revenues hit their lowest rate of growth in May since July 2009 when the industry was emerging from the slump engineered by the GFC in late 2008. Figures released last Friday showed gaming revenue rose just 7.3% to 26.08 billion patacas ($US3.26 billion) in May.

The fall was worse than estimates from Reuters, which reported two weeks ago that May’s revenues could be up 11%. The fall was far worse and is well under the 22% growth seen in April.

Rather than being some sort of indicator of what is happening in the Chinese economy, the slowing  growth in China is telling us that gambling revenues in Macau correlates very tightly with Chinese GDP growth. It should be pointed out that revenue growth of 7% isn’t to be sneezed at, just as Chinese economic growth of about 7.5 to 8% (annual) is pretty solid.

But Macau’s growth is slowing as capacity at the various casinos has increased. Selling his interests in Macau would be a smarter move now for James Packer and Crown, before the Chinese economy slows even further. It would raise the capital needed to bid for Echo, that’s assuming he gets control.

Reuters has reported in the past fortnight that the slowing in Macau gambling revenues is becoming obvious:

“Gaming executives and industry players gathering for a convention in Macau on Tuesday may have to finally confront what they have been predicting for the past two years — a sharp slowing of growth in the world’s hottest gambling market.

“As China’s economic expansion slows and high rollers from the mainland become more cautious, growth in Macau’s gambling revenue could ease to about 11% year-on-year in May, analysts say. That is a healthy number, but a far cry from the up to 70% monthly growth rates seen in 2010 and even the 22% growth in April.”