Front page of the day. We’re going to roll around in the Queen’s jubilee celebrations for one more day with UK tabloid The Sun having fun with the Queen’s husband, Prince Philip, being absent from the occasion as he was in hospital while the Queen was surrounded by music industry royalty: 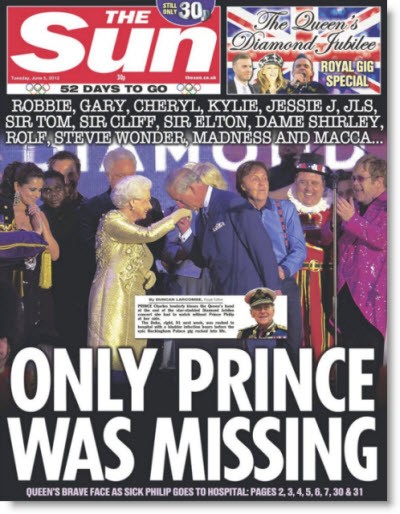 The Department of Corrections. We’re not trying to spoil the movie for you but we were rather amused by this correction in the Sunday Washington Post: 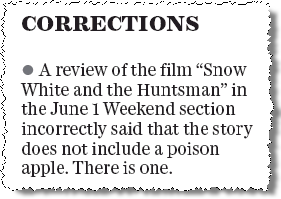 “Almost two weeks ago, The Times-Picayune in New Orleans, which is owned by Advance Publications, announced that it would cut back its print schedule to just three days a week. Newspaper executives across the industry lament the loss of the daily print paper, but concede they might follow the same path.” — The New York Times

“Fairfax is locked in talks with journalists and the journalists’ union over the company’s decision to outsource 60 production jobs to New Zealand.” — mUmBRELLA

“The group meets up every week to plan for the launch later this summer of a multi-platform website called Narratively. Each week will revolve around a particular theme. The site will publish just one story a day.” — Capital New York

Why Uri Blau’s arrest should have us worried

“Haaretz journalist Uri Blau is to be indicted by Attorney-General Yehuda Weinstein for unauthorised possession of classified materials. ” — Huffington Post

“Facebook has 800 million active users around the world who constantly update their statuses, upload photos and check-in to locations. That’s an incredibly difficult amount of activity to process — so hopefully these beautiful visualisations will help.” — Mashable