Hywood’s Fairfax rally: ‘we can no longer afford to work in silos’

Greg Hywood has launched an aggressive internal push to reform Fairfax's culture and values, emailing staff and hitting the company's intraweb to implore his charges to embrace "massive change".

Embattled Fairfax CEO Greg Hywood has launched an aggressive internal push to reform his company’s culture and values, emailing staff and hitting the company’s intraweb to implore his charges to embrace “massive change” and “remove the negative aspects of our culture”.

A bristling Hywood explained this morning via an internal video that Fairfax has lost its monopoly classifieds and needed to embark on a jargon-led journey of reform to remain a viable entity. 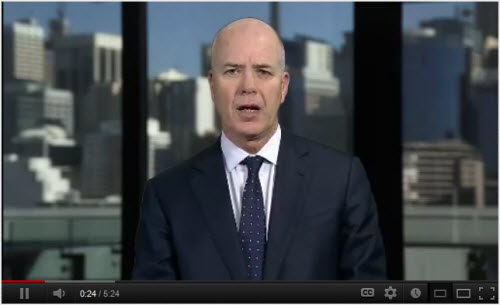 “Hi there,” begins the apparently agitated CEO, explaining that the company’s rivers of gold had slowed to a trickle. “We have to stop any dysfunctional internal competition and we can no longer afford to work in silos with little or no collaboration. This requires us to move from an inwardly focused culture to an organisation that looks externally.”

The former Tourism Victoria chief is patently a big fan of crushing the company’s famous silos, however Fairfax sources said this morning that during the Fred Hilmer era Hywood was himself firmly attached to exactly this ethos.

“I remember at the Herald and everything that happened at The Age was terrible, they were all hopeless down there and then I went to The Age and everyone at The Sydney Morning Herald was hopeless … and of course it was completely wrong,” Hywood recalls.

Alongside the email from the boss, Age staff were this morning presented with their own personal glossy “culture and values” circle that is apparently meant to be folded and placed on their desk for easy reference. It contains buzz words like “working together” and “customer centricity” and was apparently the result of an “InSync alignment and management survey” and “21 focus groups” that asked staff about the values of the business. 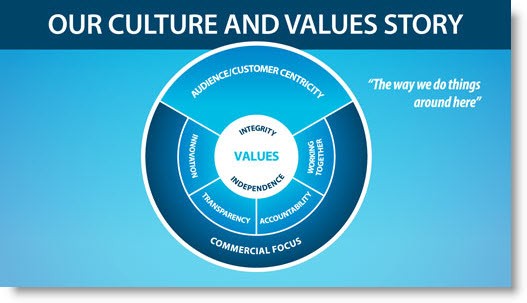 The one-time AFR cadet is currently undertaking an ambitious $170 million, three-year cost-cutting strategy achieved through rationalisations and sackings. In the next week it is expected to announce, alongside bitter rival News Limited, a plan to go the “full digital” by further de-prioritising the company’s Monday-Friday print editions.

The Garry Linnell-led “platform agnostic” newsroom restructure is expected to dispense with the traditional newspaper working day with more of a focus on the 6am-midday shift when Fairfax’s competitive advantage is often sopped up by other outlets. Fairfax’s 800 editorial staff across its major metro properties will be affected.

Last week the company said it would sack 66 subeditors at the Newcastle Herald and the Illawarra Mercury and outsource the jobs to New Zealand. Negotiations with the union are continuing. Eighty subeditorial positions on the major metro mastheads were outsourced to central hubs at Pagemasters last year.

Hywood today sounded a word of warning for Fairfax newsroom fossils still wedded to old certainties like an 8pm deadline.

“I’ll be encouraging all teams to consider what behaviours need to change to adopt this way of working and I’ll be expecting all leaders to help support their times to make it meaningful and build a culture that serves our audiences and that starts with everyone of us working differently,” he said.

But staff seem less convinced.  One peeved Age journalist told Crikey this morning that “talk of breaking down silos won’t wash at the Newcastle Herald or at the Illawarra Mercury where dozens are being sacked and work is being sent across the Tasman to create a new subbing ‘silo’. That’s an odd way of working together at those workplaces.”

Fairfax shares slumped 2.4% to an all-time low of 60.5 cents this morning.

News Limited will announce a similar scorched earth strategy in the next few weeks, according to CEO Kim Williams.

I wonder if the genius who came up with that one will dare to put it in their CV?

Was getting around to renewing the annual Age M-F delivery sub @ work today. “Sorry we don’t offer annual subs any more, only half yearly.”

This forced an evaluation of what precise direct benefits we get from the sub. Hey presto, no more subscription!

Has anyone ever EVER studied the effectiveness of the values/culture exercises such as that contained in the Fairfax Blue Circles?

So Fairfax embraces the reality of the National Broadband Network instead
of politically opposing it through the Howard and Abbott years like News
Ltd. At least someone in the media has a grip on contemporary reality.
This a classic case of the silo workers being, care of the internet, dentralised
to work at home, shock horror for all those undecenrtalised and soon to be
stranded real estate assets? The real and inevitable coming horror for all
those vested interests and their political servants?
Don’t have a brain aneurism tying to think too hard about all this, just take
your valium, find a comfy seat and drift away into hte past glories of your
“Golden Era”. Time and tide wait for no-one. Get out of the new world if you
can’t lend a hand, for the times they are a’changing! Etc, etc ad nauseum.