In today's Media Briefs: Kim Williams attacks incorrect reports -- including in The Australian ... phone hacking claims mount for News International ... the neo-cons of The Oz ... Fairfax restructure details and more ...

News Ltd plan “two or so weeks away”. News Limited CEO Kim Williams has rubbished “inaccurate reports” about the company’s upcoming restructure announcement — including in his own paper The Australian, which incorrectly reported it would happen this week — in a message to staff this morning …

Many will have read recent, inaccurate reports about an announcement by me being made today as to changes in the company. Those reports are misinformed and speculative, based on nothing other than rumour.

As I have indicated previously I have been working with my Executive colleagues in shaping a reformed approach to the management of the company to ensure we continue as a leader in Australian media delivery.

As with all such announcements it is important that the settings are right, the planning comprehensive and the communications open and direct to everyone in the company.

I undertake that when the plan is complete and ready for delivery I will be informing our own people first. I will be doing so as helpfully and openly as possible.

I expect that announcement will be ready in two or so weeks’ time and look forward to outlining the plans then.

No doubt there will continue to be speculative comment but I would encourage everyone to hold tight and wait until you here directly from me and my colleagues.

With all my very best wishes,

Civil claims against News: 500-plus. While the cost of the phone hacking and other scandals continues to mount towards the $US500 million mark for News Corp, Rupert Murdoch has another half century to be concerned about: the number of civil claims for damages.

A UK court was told on Friday by lawyers for News International that News was “dealing with 500 claims, potentially” from people who say they were hacked by the News of the World (and whose claims are backed up by police evidence). The lawyers later gave as 520 the number of claims identified. About 60 claims have been settled, another 49 are under way from people include Cherie Blair and England footballer Wayne Rooney.

The most intriguing news from Friday’s hearing was the interest in the iPhones of two senior News International executives. The two were unnamed, but Justice Vos ordered News International to “preserve” the company iPhones of two senior executives and their email contents. The Guardian said: “It is understood the request for access to the iPhone emails is related to allegations of concealment over phone hacking and would not point to evidence of hacking beyond the time when private investigator Glenn Mulcaire was jailed. ‘This could be very significant,’ said a source.”

iPhones were not available in the UK until November 2007, nine months after NotW royal editor Clive Goodman and private investigator Mulcaire were jailed for phone hacking, the order from Justice Vos raises the possibility that more information on hacking could be found. It is the first time in the various inquiries that these iPhones have been mentioned. — Glenn Dyer

Weekend Oz introduces neo-con page. What a comfort to us all that Keith Windschuttle has finally been able to explain the wellsprings of the central recommendation of the Finkelstein media inquiry. The proposal that there should be a government-backed body to regulate content standards across the media is — wait for it! — a plot hatched by post-modernist cultural studies academics.

Windschuttle expounded this thesis in the main opinion feature on an extraordinary page of neo-con pieces in the “Inquirer” section of Saturday’s Weekend Australian. Beside it, editor Nick Cater ran a bizarre column by Ozlegal affairs writer Chris Merritt that seemed to argue the ABC should not have given prominence to its reports that climate scientists at the ANU had been the target of death threats because such verbal assaults were now commonplace. The headline said it all: “Death threats just par for the course.”

And completing the neo-con page was a think piece by one Benny Peiser,  director of the UK denialist “Global Warming Policy Foundation”. Between his lumbering rhetorical questions,  Peiser made the claim that climate sceptics weren’t getting fair access to the media, and that the whole issue therefore lacked “balance”. To read this in The Oz was beyond laughable.

Diversity of opinion is essential to any liberal democracy and, like any newspaper, The Oz has a perfect right to take sides. But please, not all at once on the same page. Some of us are trying to have our breakfast. — David Salter

Front page of the day. Even News International’s storied Times newspaper couldn’t help but be swept up in royal jubilee fever … 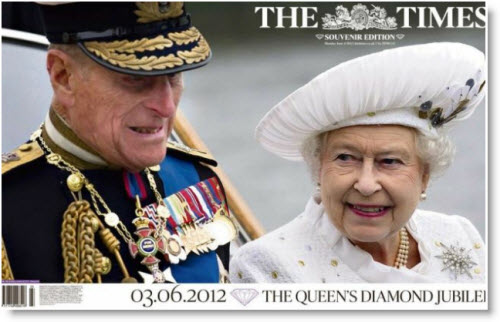 “Fairfax Media is on the brink of one of the most radical restructures in its 171-year history, with a centralisation of all basic back-office services.” — The Australian

“Australian drama and children’s programs would all but disappear from TV schedules if content quotas for free-to-air stations were scrapped, a report commissioned by the government has found.” — The Sydney Morning Herald

“More staffers are speaking out against The New York Times in the protracted battle over contract negotiations, saying that they feel betrayed by the management’s position.” — The Huffington Post

“By cutting back on print publishing, newspaper executives are betting they can wean loyal customers and advertisers from their daily print newspaper habit, while at the same time driving them to their own website. Some industry analysts warn that readers raised on a daily newspaper appearing at their door will lose a sense of loyalty if it arrives only a few days a week.” — The New York Times

No doubt there will continue to be speculative comment but I would encourage everyone to hold tight and wait until you here directly from me and my colleagues.

If so, it’s a scandal, right up there with other “hereheargate” scandals. But if the transcriber got it wrong, Mr. Williams is owed a profound apology.

To admit to reading The Australian is almost an admission of stupidity. Unless it is for reporting purposes of course.

[If so, it’s a scandal, right up there with other “hereheargate” scandals.]

On the plus side his mastery of the possessive apostrophe was heartening for the future of quality journalism in Australia.

I also look forward to the Australian priting articles about just how much of a rag it has become, all in the name of ‘balance’, of course.