Gloomy news from the market

Any depression reading the papers that I have is surely insignificant compared with what would be the normal human reaction to seeing another of those opinion pollster findings about prime ministerial popularity.

I wish I hadn’t looked. My morning glance at that financial web of record Business Spectator was a gloomy excursion today. 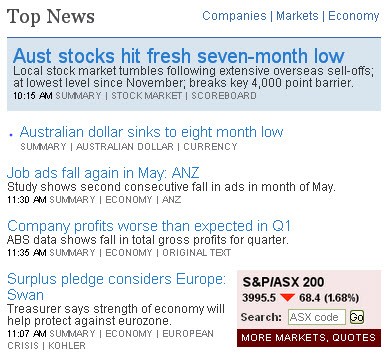 To cheer myself up I had a look at the Japanese stock market index to remind myself that things  could always be worse.

Searching on the brighter side. Those melancholy thoughts sent me searching for some better news and initially I thought I’d found it in the story of a turtle farm in the Cayman Islands freeing a roughly 60-year-old turtle to celebrate Queen Elizabeth’s 60 years on the throne. But then, when I read on, I discovered the turtle was a “he” who had had a wonderful life as a stud turtle. Maybe life in the wild on his own will not be nearly as attractive for an old fellow. That’s something I can relate to.

Not much joy for Julia. Any depression reading the papers that I have is surely insignificant compared with what would be the normal human reaction to seeing another of those opinion pollster findings about prime ministerial popularity. I don’t care how thick a skin you have got, numbers like Julia Gillard’s have got to get you down.

Unfortunately there is no solace for her in the latest Crikey Indicators. They are pointing to an even greater likelihood of a Labor defeat and an increasing probability that Julia Gillard will not be leading her party when the next election is finally held. Goodness knows what the likely election winner figure would be if the majority was not convinced a change in leader is likely. Presumably something like 95 to five. 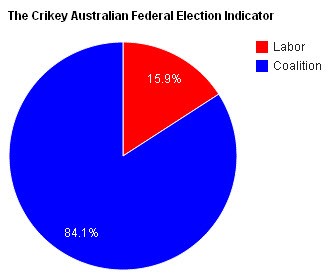 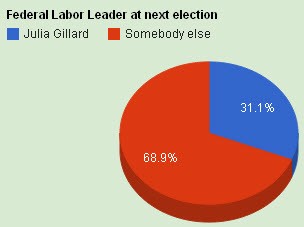 As a rough guide, incidentally, that 84 to 16 probability suggests to me a predicted two-party preferred vote when the election comes of 55% for the Coalition and 45% for Labor.

Perhaps the Reserve Bank will help. Maybe another reduction in interest rates will help improve confridence in the PM and her party. The markets certainly think one is on the way with the biggest debate among the punters on such things being whether tomorrow will bring a 0.25 percentage point drop or a 0.5 point one. 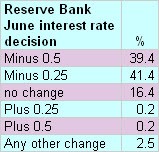 Bruce Springsteen lyrics that are striking a responsive chord as he tours Europe.
Some news and views noted along the way.