Addy redundancies? … say no to Optus … other Tourism Aust …

From the Crikey grapevine, the latest tips and rumours … Sackwatch: Addy staff to go? More rumours of News Limited job cuts, with word that the Adelaide Advertiser is in the process of handing out a large number of redundancies. Will the daily cut down its publishing schedule? “Mmm only three papers per week?” asks […]

Sackwatch: Addy staff to go? More rumours of News Limited job cuts, with word that the Adelaide Advertiser is in the process of handing out a large number of redundancies. Will the daily cut down its publishing schedule? “Mmm only three papers per week?” asks our Addy insider.

Sackwatch: other Addy loses subs. News Limited’s swinging axe has reached all the way down to Geelong where the heads of 10 subs will hit the floor on July 15. “For a paper that loves to play the concerned citizen when other local businesses shed staff, The Addy is uncharacteristically quiet on this one,” a News watcher tells us. Apparently journalists are taking to Facebook to air their views about the decision. Seen anything? Forward it to us.

“MCG Catering Spotless Catering (Epicure) is being taken slowly over by Pacific Equity Partners (PEP) and all is not well at the MCG. The queues, running out of pies and change on the weekend at both games is the latest in a long line of cost-cutting exercises — except this was the worst yet. The games weren’t that big either. It was terrible, a lot of unhappy fans. Some high-level talks are taking place on Monday about the pressure PEP are putting on Spotless or the pressure Spotless is putting on themselves.”

The other Tourism Australia. We received an interesting tip from someone who’d been trolling through the NSW Election Funding Authority disclosure pages (as you do) when they came across a Tourism Australia declaration of a 2009 donation to the NSW Liberal Party. Only $1350 but during the term of a Labor government. “Since when has donating taxpayers money to the Liberals been legal?” asked the electoral funding watcher. But all is not as it seems. The $1350 NSW Liberals donation came from the Tourism Institute of Australia, a hospitality education provider. The electoral authority had simply shortened the name!

Can’t say no to Optus. “I have been receiving unsolicited “alerts” on my mobile phone from Optus. They message says that one can unsubscribe from these, so I attempted to follow their directions. I defy anyone to be successful,” an Optus customer told us. We headed to optus.com.au/alerts and then “how do I deactivate the new SMS Usage Alerts”. There are 10 steps!

ACL backs MPs who don’t back gay marriage. After the NSW upper house passed a motion to support same-s-x marriage last week, the Australian Christian Lobby sent a missive around to supporters asking them to send emails of thank you to the “sixteen MPs who showed tremendous courage and stood up for real marriage”. It also declared the vote “nothing more than a stunt” since only federal Parliament can pass marriage legislation. 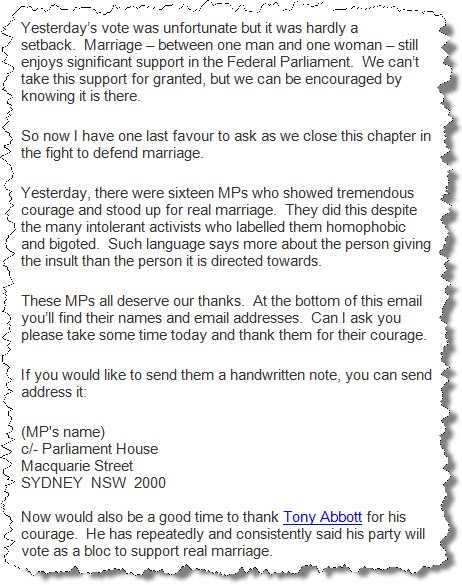 Lara Bingle’s bungle. Reality TV wannabe Lara Bingle is to appear in court after allegedly hitting a motorcycle while driving on a suspended licence. Her licence was suspended when the cameras were rolling for Being Lara Bingle and now as part of the new motorcycle incident “police executed a search warrant on the production company of her reality show and obtained footage of the incident where Bingle was informed that her licence was suspended,” says one Bingle watcher.

No customers required, just media. Make-up king Napoleon Perdis opened his new “department store”-cum-gift shop in the old Post Office in Queen Street, Woollahra. The Sydney Morning Herald gave it a nice plug in Thursday’s strike edition in the Fashion Police column and said it was called a “lifestyle store”. Fascinated, a long-time local tried to enter the store to have a look that morning around 10.30, only to be told by someone working in the store (cleaning the glass doors no less) that you needed an “appointment for the first few weeks’. And, anyway, “the media” were coming later today for an inspection, the chappie said.

“Wonder if the on-strike Fairfax journalists attended, especially one or two noted freebie queens? It would have been a perfect way to spend a day on strike, a quick trawling of the Perdis gift shop and then over to Bill’s or around to Chiswick for lunch and a drinkie or three. But what an odd attitude from a retailer in the current tough environment!” writes the Woollahra watcher.

@ACL backs MP’s who don’t back gay marriage. Jesus hung around with 12 male deciples most of his life; Jesus not gay? Hmmm! I wonder if ACL is on the right track here?

“The electoral authority had simply shortened the name!”

Is this standard procedure for the electoral authority concerned?

How many other declarations are altered in the NSW Election Funding
Authority disclosure, and doesn’t abbreviating the details entirely negate
the purpose of the document?

BILL HILLIGER: Apart from the fact that the Australian Christian Lobby has no business telling the rest of the community what to do, I wonder what “”Real marriage”” actually means? It’s like the sacred cow of “family values” beloved of politicians like John Howard. Presumably real marriage will become real, real marriage once the law comes into being The Christians are as bad as the Muslims; as soon as they see something they don’t understand they want an instant fatwa applicable to the entire nation.