Lessons in how to put out newspapers without any staff

Fairfax journalists returned to work this morning after 36 hours on strike, but not in time to breathe life into anaemic editions of The Sydney Morning Herald and The Age. Matthew Knott and Andrew Crook report.

Eight hundred Fairfax employees returned to work this morning after 36 hours on strike, but not in time to breathe life into today’s anaemic editions of The Sydney Morning Herald, The Age and The Canberra Times.

The strike editions of today’s broadsheets are full of colour stories plucked from the deep freezer, yarns republished from other Fairfax publications and reports ripped from the AAP news wire. Senior managers and editors — many of whom haven’t filed copy for years — also got back to basics in a desperate bid to keep the public informed.

SMH sports readers were treated to a cracker from national metro editor Garry Linnell — who is set to announce more editorial cuts to Fairfax in the coming days — on talks between Nine and Seven to share broadcast rights for the AFL and NRL. Meanwhile, Lauren Quaintance, the general manager of Travel, managed to vox pop shoppers outside David Jones’ CBD store while contributing a piece on outrage over Craig Emerson’s plan to transform northern Australia into Asia’s food bowl.

Front and centre of the Herald’s front page is a feel-good story about private schoolgirls taking a trip to Afghanistan to visit Kabul’s National Institute of Music.

Crikey was also struck by a rare appearance by Brad Cooper, Fairfax’s “national beef writer”, and a mysterious full-page feature on cyberspace illegality by Eileen Ormsby. The Factiva archive shows Ormsby’s byline has only appeared once before, in a similarly lengthy piece for The Age in April.

Down south, Quills kilt-wearer and cadet trainer Colin McKinnon was on deck for The Age, filing a page-one lead on Allan Fels’ deregulation proposals for the Victorian taxi industry. McKinnon even appears to have ventured down from the executive suite to bail up surrounding cab drivers to get their views.

None, however, matched the feat pulled off by national managing editor Mark Baker — who followed up yesterday’s front-page effort with three stories on Afghanistan, Julian Assange and the carbon tax. 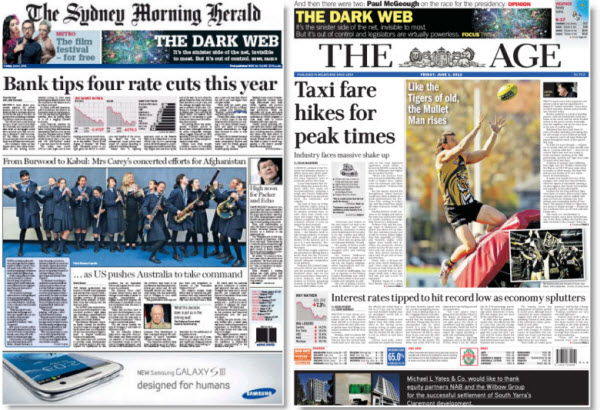 On the right side of page one sat an amusing colour by Leaping Larry L on the resurgence of Richmond. Leapster tells Crikey he “filed the story on Wednesday evening, after I was approached via phone about doing it on Tuesday arvo (from memory)”.

A conference call with editors later on Wednesday requested some extra material on “flying mullet” ruckman Ivan Maric, which Leapster wedged in. As a self-employed freelancer he wasn’t aware of what had gone down with the strike until before the update was filed and his aunt had alerted him to his front-page dinkus first thing this morning.

Over on the opinion pages, former Anthony Albanese speechwriter Martin McKenzie-Murray — who had earlier offered to auction his column on Twitter to the highest bidder to send a message to management — featured prominently. So did horrified SMH political sketch writer Jacqueline Maley, who took to Twitter to tell her comrades that she was no scab. Her op-ed on organic food snobbery had been lifted from Fairfax’s Daily Life site, where it was published on Wednesday morning.

Under the Fairfax EBA, some essential staff are quarantined from strike action and Fairfax foreign correspondents, who work under a separate contract, are also required to clock on. On Twitter, Jakarta correspondent Michael Bachelard apologised in advance for his exclusive page 10 interview with Bali bomb psycho Umar Patek at the West Jakarta District Court.

The Australian Financial Review was less affected, with heavy-hitters Laura Tingle and Jennifer Hewett still filing. Subeditors, however, were out — leading to several typographical stuff-ups and non sequiturs.

Jake Wishart from the Media, Entertainment and Arts Alliance sounded a stern warning for Fairfax management, telling Crikey that “journalists are united and they won’t cop any lack of consultation in future”.

Negotiations on the fate of the 66 regional subeditors (including 55 full-timers) set to be tapped on the shoulder are now underway, Wishart says.

Strike editions hold a special place in the annals of Australian journalism. Peter Smark, the legendary reporter/raconteur at The Age and later The SMH, who later became a senior editor, revelled in producing strike editions because it enabled him to return to the keyboard. And his copy enlivened some strike editions in a way the regular paper rarely achieved.

Another keen strike-breaker was Piers Akerman, with Herald & Weekly Times scribes recalling a 1990 incident during the merger of The Herald and The Sun when they chanted “wake up Piers” as the staunch Tory ed bashed out another hatchet on Joan Kirner. A makeshift disco also materialised at midnight as journos jacked up their PA system and danced on the tram tracks as the local constabulary kindly parked in the middle of Flinders Street with siren off but blue lights whirling in a rare moment of worker solidarity.

Crikey understands yesterday’s embarrassing error-ridden, management-penned strike brief reporting the subeditorial outsourcing — which cut off half-way through — will now be blown up, framed and presented to the Age house committee for prominent display in the level two newsroom.

Really that bad? I read The Age over breakfast and didn’t twig there was anything different. Not until the wife joined me and asked about it did I even remember the strike! The Age has been pretty dismal for a few years now – hard to see how it could go downhill.

Perhaps with less oversight main stream papers may slip back to informing their readers. Instead of pushing the ideas and spin sponsored by the people with money and influence? Edward James

The 1975 journalists’ strike at the Australian in the lead up to The Dismissal. Lost to memory?

I had a letter published in one of the strike editions… (I didn’t even think!). A spelling mistake (which I had made, I missed an “e” in a place name) was repeated. That would never have happened normally.

Also, I got two emails requesting clarification and further details (and a phone call which I missed) from the paper. Again, that has never happened to me before. I’m fairly regular writer (once every couple of months) and get published about 75% of the time. But normally no one ever contacts me. Just a form letter “Dear— You have been shortlisted…

You forgot to mention the gripping story on Page One of Canberra times. A baby needing surgery because a hair wrapped around its toe. Newsworthy? Maybe. Front page? Don’t think so.