Labor are pencilling in July 1

The Prime Minister seems to be investing a lot of faith in a belief that on 1 July that the people will see Tony Abbott as a scare mongering fraud and that Labor's stocks will improve.

Will 1 July be a magic day? The Prime Minister seems to be investing a lot of faith in a belief that on 1 July, when the sky does not fall in with the introduction of the carbon tax, that the people will see Tony Abbott as a scare mongering fraud and that Labor’s stocks will improve. Although there’s no real evidence that it is the higher prices the new tax will bring that has turned voters off Labor.

Insofar as the carbon tax is an issue it is because of Julia Gillard’s “there will be no carbon tax in a government I lead” broken promise. That’s something time is not going to fix.

Down goes the wealth on two fronts. A thing far more likely to influence the attitude of voters than a carbon tax is the dual front of declining wealth. The stock market is taking a bath reducing the value of superannuation savings and the slide in housing prices continues.

The RP Data-Rismark Home Value Index released this morning shows a -1.4 per cent fall in dwelling values over the month of May. The latest drop brings the cumulative decline to -2.2 per cent over the first five months of 2012 and overall values are down -5.3 per cent over the past twelve months. 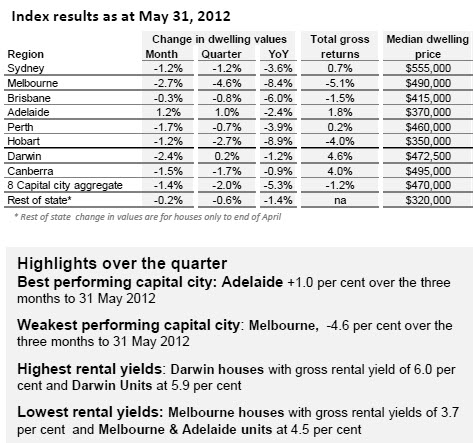 Market optimism about next Greek government was premature. When a couple of opinion polls late last week showed the likely election of a government committed to staying in the Euro zone those fickle stock markets found an excuse to rally. Perhaps tonight they’ll have yet another excuse to move in the other direction for the latest poll in the Greek daily Kathimerini has the socialist Syriza, with its anti-Austerity policy, six points in front.

Now one opinion poll does not make a result but the rewards for being the party with the greatest number of votes are huge under the Greek electoral system which rewards it with an extra 50 seats. And to keep the markets in a volatile state the Greeks apparently prohibit any more opinion polling from now until election day on 17 June.

Here’s a summary of how the major parties have fared in recent weeks: 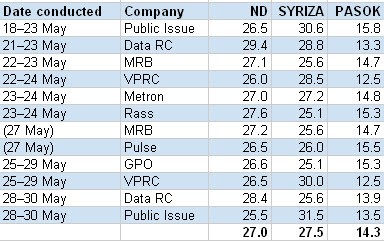 ”I’m deeply concerned by the prejudicial statements that have been made … the Prime Minister said that Mr Assange had done an illegal act when referring to the publication of the WikiLeaks cables. She’s never identified any Australian law that Mr Assange has broken.”

— Shadow foreign minister Julie Bishop on the side of innocent until proven guilty Julian Assange.

If the Government are hoping July 1 will mark an end to their problems they had better think again. The Coalition will claim every price hike and every business closure that occurs between now and the election as being a result of the ‘carbon tax’, regardless of what caused it. In this they will have the support of their usual media cheer squad, together with the support of venal and incompetent business managers who will be only too happy to have someone / something else to blame for their failings.

And of course any difficulties in the implementation of the tax will be blown up into a huge disaster. The Daily Telegraph and other tabloids will feature pictures of glum-looking families who have to give up holidays / school excursions / food because of the impact of the ‘carbon tax’. In short, the Opposition and their media allies will do everything they can to convince as many as they can that the world DID end on July 1.

For wealth read perceptions of declining wealth. The Mortgage lenders own the wealth and the inhabitants merely service the loans. So declining house prices are a
decline is whose wealth? Owning a multitude of mortgage slaves as a
form of wealth is weird considering Adam(Who?) Smith’s dictum that
“A dwelling house, as such, adds nothing to the income if its
inhabitants” What wealth? Unsustainable debt as wealth?
Noticed any global financial crises lately.
Declinng wealth as a basis for political unpopularity is a sreal as
believing that people, including PMs are witches.
The political reality is that an icoming Abbott regime with its
surplus at any cost fixation willdrive the economy into recession
or even depression. Is this really what all these savvy “Gillard is
Unpopular” commentators really want? If they keep on with this tripe
that is exactly what they will get. It is truly pathetic egotistic self-
indulgence at its detructive worst. Simply moronic.