Dear Mr Hywood. Newcastle Herald’s union house committee pens a letter to Fairfax chief Greg Hywood. A public rally is organised for 1pm Saturday at Newcastle’s Civic Park, with a number of civic leaders and public figures to speak against the exporting of Novocastrian jobs to New Zealand.

To Greg Hywood, CEO Fairfax Media Ltd
From Newcastle Herald MEAA House Committee
Dear Mr Hywood,
We note Fairfax Media’s plans for our newspaper and want to express our disappointment.
Newcastle Herald staff and management have a well-earned reputation for innovation, hard work and loyalty.
This team delivered a seamless transition from broadsheet to tabloid, to cite just one example.
We know our community and have built a trust-based relationship that draws on 150 years of history.
You may or may not be aware of the great pains to which staff and management at this newspaper have gone to construct a plan to meet the challenges of the on-line environment.
This is a realistic plan, solidly based on practical considerations, that takes advantage of the paper’s continuing strong profitability to move into the online environment.
The company’s proposal to dump that plan is a dangerous one that puts at risk a wonderful brand and a wonderful business.
Given our apprehension about the company’s proposed course of action, we would like to express our interest in opening discussions about a local buyout of this newspaper business.
We understand that people in capital cities are often too busy to pay much attention to regional affairs.
Living here, we appreciate what an excellent business we are part of and would be delighted to explore ways of taking over its operation.
We know that our newspaper makes a profit in excess of $15million a year and have always been keen to help drive this figure even higher.
We also know that it isn’t necessary to export jobs in order to maintain and improve our position and fear that the company’s proposal seeks a short-term gain that will entail a terrible long-term loss of value.
It seems particularly counterproductive to pursue such small apparent cost savings – in terms of Fairfax’s overall trading position – when the consequences for so many people stand to be so severe.
It is our hope that you will seriously consider our offer to open talks on a possible sale of the masthead and business to people who understand and value the vital role the Newcastle Herald has played in the Hunter community for more than 150 years.
We would welcome the opportunity to meet with you to discuss our idea.
Alternatively, if you are unaware of the extensive plans we have drawn up in consultation with local management to drive our business into the digital era, we would be delighted to share those with you too.

Dover told the University of Melbourne’s Melbourne Conference on China yesterday that “the ABC’s view was that while we absolutely believe we should align the Australia Network’s goals and priorities with those of the department, the issue of editorial independence and integrity was sacrosanct, a view not apparently shared by our tender rivals, and a position some senior government officials saw as sanctimonious.”

Late last year the government awarded the ABC a permanent contract for the eleven year old service after a heavily-criticised tender process was abandoned. The other bidder, Sky News, was later paid $2 million in compensation. DFAT officials have long been irked by the ABC’s insistence on editorial independence for the service, although then-managing director Jonathan Shier made it a core condition when he agreed to Howard government requests to bid for the contract in 2000.

Dover, a former News Corporation, CNN executive and author of Rupert’s Adventures in China, who headed the network since 2007, argued that Australia’s interests were better served by a broadcaster demonstrably independent of government:

“Our argument was that independence stands out as the single defining factor which guarantees a broadcaster’s credibility and is the foundation of its reputation. When audiences across the region see our program is not just independent but also fair, balanced and objective, and sometimes critical of Australia and Australian policy, they respect that. It reflects Australian values to do with fairness, equality and openness without necessarily pushing Australian interests. This in turn reflects well on Australia Network and on Australia. Independence is the standard by which audiences determine which broadcasters they trust, and as a consequence how they react and respond to sponsoring government. If government interference is detected, credibility is lost and trust vanishes. And trust can only be won, not bought, no matter how much money is on offer.”

Mistake of the day. As Fairfax journalists strike against sub-editing positions being cut at regional papers, a story on page seven of today’s Age highlights just how crucial subs are to newspapers. Check out the final line, in a glorious stroke of irony: 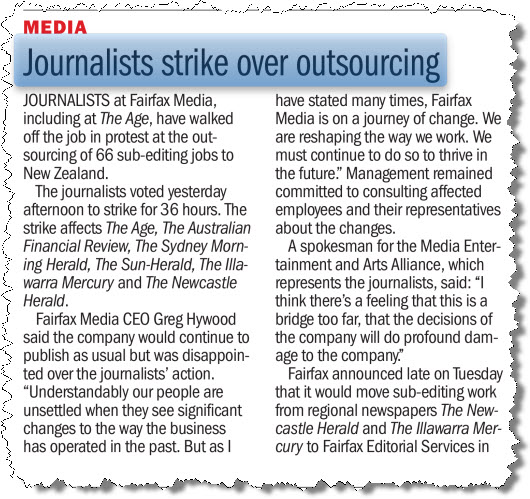 The sub-editing work is moving to New Zealand, for those who missed it.

Front page of the day. In a break from tradition, today’s “front page of the day” isn’t actually a REAL front page but a mock-up by some clever Fairfax soul on how the Illawarra Mercury — one of the regional Fairfax newspapers effected by the shift of subeditors to New Zealand — would look like under the new regime: 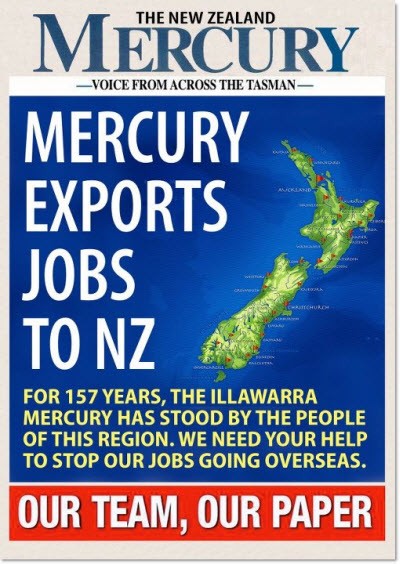 Leveson: newspapers given too much prominence

“Giving evidence to the Leveson inquiry on Wednesday, the justice minister, Ken Clarke, says the importance politicians give newspapers is out of proportion with the effect newspapers have on the public opinion. He says that the daily headlines do not matter to ‘real people’ outside Westminster and Whitehall.” — The Guardian

“I had been certain that the bubble would pop. But I was disappointed. For weeks, print and pixel had been dominated by news, overwhelmingly uninformed or stale, about the long-awaited and presumptively historical Facebook IPO.” — Wired

Did anyone ask Clarke if he’d be just as sanguine to have the viewspapers against him?

ACA are ridiculous, Thomson was not going to be charged with hiring a hooker, the only thing that might have happened is a $1,000 fine for not obeying credit card rules that didn’t exist.

Why the puerile media in general and even this place have focussed on this dingbat claim is beyond me.

Surely the fact that Nassiios was so wrong on the AEC claims is enough for the entire media to believe he is telling the truth about everything else.

Well, it was bound to happen ONE day, folks ie: ACA making an intelligent editorial decision. This is a first, who would’ve predicted it?

ACA paid the interviewee exactly what her statement was worth – nix.

ACA should cover that story?