Fairfax sub jobs shipped to New Zealand. Fairfax’s decision to move its regional sub-editing jobs to New Zealand has infuriated staff, who say the company is ignoring how profitable local papers can be for Fairfax.

Sixty-six editorial production positions at the Newcastle Herald and the Illawarra Mercury will be taken over by Fairfax Editorial Services across the Tasman.

A Newcastle-based MEAA spokesperson told Crikey that the changes — including a loss of 41 staff from the Newcastle Herald, totalling 45% of the paper’s workforce — make no sense because the paper is one of Fairfax’s most profitable.

“We’re one of the best mastheads in Fairfax,” they said. “We have a monopoly market and a strong regional identity. Most locals aren’t interested in Sydney papers … we’re two hours of inconvenient driving from Sydney.”

Newcastle Herald staff have embraced a digital makeover and had a plan set in place with Newcastle management on how to cope with falling sales and the move online.

“Staff have been highly committed to change,” said the spokesperson. “People have been working with Newcastle management on putting together seven-day rosters, round the clock coverage, plans on how we’re going to migrate content online.

“We’ve got a very good plan that everyone has endorsed. Everybody had been consulted widely, rationalisation was likely but in an orderly matter. All the subs had been trained in online work. We have a highly committed workforce who knew what they had do.

“We have the time and the opportunity and the leisure to use the profitability of our print product and experiment online.”

If anything the issues with online content is due to Fairfax’s “one size fits all” approach, says the spokesperson. “We’ve been hampered by Rural Press’s hopeless cookie cutter website format.”

And decisions from city-based managers aren’t appreciated. “We don’t need some drongo from Fairfax butting in,” said the spokesperson.

“If the business circumstances dictated that was necessary, we wouldn’t argue. But we feel there’s an element of spite. Fairfax management have to be seen to be doing something and they chose some regional bunnies as a scapegoat.” — Amber Jamieson

Independent advice on media matters. Crikey usually displays the upmost scepticism when it comes to the affairs of Kathy Jackson but a bevy of strange media events in recent days requires a response. Last night, website Independent Australia reported the “breaking news” that Jackson had received a “$1/2 million” payment from her former No. 3 branch in Victoria. In fact, the $500,000 figure had been reported over a month ago by Age workplace editor Clay Lucas who’d been browsing a declaration of membership lodged by the branch with Fair Work Australia.

Lucas’ yarn included a denial from Jackson, who produced a letter from her accountant, Agostinelli Perlen director John Agostinelli, explaining that the signed-off amount was incorrect and that she was actually paid $75,884 in that year (Jackson also received $151,000 from the national office in her dual role of HSU National Secretary).

Blogger and small business owner Peter Wicks then claimed in his “ground breaking investigative report” that the half-a-million-dollar payment was “in addition [emphasis added] to Jackson’s $270,000 salary”. In fact, it was widely reported five weeks ago that the $270,000 figure only kicked in after the merger of the Victorian branches with the NSW and ACT branches to form HSUEast at the tail end of financial 2010. The new remuneration figure was influenced by the existing salary structure of Michael Williamson’s NSW branch.

Then, in another claim — IA stated it “broke” the story of a complaint letter written by Jackson’s partner, Fair Work Australian vice-president Michael Lawler, to the NSW Police. ABC 7.30‘s Leigh Sales has also shown some interest in the letter in recent days. But it wasn’t news either — the letter, sent on December 21 last year, was obtained by The Sydney Morning Herald‘s Kate McClymont way back in February and followed up by The Australian three days later.

Lawler was irate after former HSUEast Victorian divisional secretary and ex-Jackson ally Carol Glen (nee Carmichael) wrote to outgoing FWA president Geoffrey Giudice complaining he had verbally threatened her over a planned resignation that would have eroded her power base. The actual news, covered extensively elsewhere, was that new FWA President Iain Ross had told Senate Estimates there was no evidence Lawler had intervened in FWA’s report into Craig Thomson.

Crikey is all for new independent media players. But it might help to check the clippings before leaping into print with “revelations” that were actually discovered by the same “corporate media” IA purports to lampoon. — Andrew Crook

Front page of the day. A tip of the hat to Daily Telegraph editor Paul Whittaker — who Crikey understands is a fan of this section —  for today’s Star Wars photoshop effort: 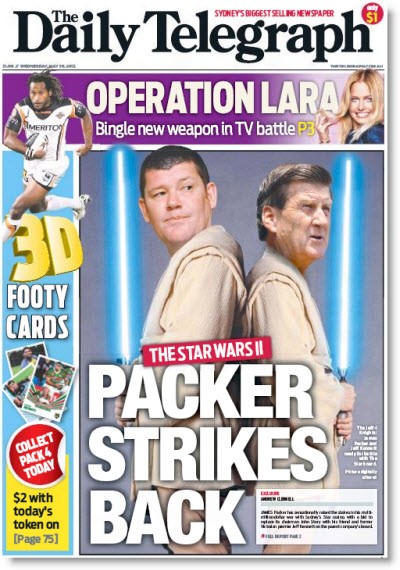 “A hacker-journalist from the Los Angeles Times has started an online project to capture the front pages of news websites on the hour, every hour, in a bid to archive news website homepages for future generations.” — journalism.co.uk

“A Russian journalist is in hospital after being lured out of his home and stabbed 20 times late on Monday night in the latest attack on a member of the press.” — The Guardian

“About a dozen people were laid off today at Sesame Workshop, producers of Sesame Street. The job cuts were at the company’s main New York offices as it ‘shifted some resources to better align with our strategic priorities and new opportunities,’ a company spokesperson told Deadline.” — Deadline

The Forbes model for journalism

“Forbes is swimming. The Forbes.com audience doubled in the past year to 30 million monthly unique users, thanks in part to almost 100,000 posts created by nearly 1000 authors.” — Poynter

Most of the work by Peter has been to show that it is the MSM caught up in the nonsense of pretending that it could not be the truth that “Thomson was set up.

He showed it comprehensively that the MSM had all reported the very set ups they claimed could not exist.

Spite is tedious because 7.30 took 6 months to bother to report the interference by Michael Lawler and that is Peter’s entire point.

They are so besotted with Jackson that they refuse to point out that she is shonky.

So read the articles again Andrew because Crikey has been as guilty as the msm of condemning Thomson over nothing at all.

All these “ex’s” in the HSU? What was Thomson paying for it for?

What does that even mean Klewso? Thomson has not been in the union since 2007, the financial report of 2010-11 is nothing to do with him.

There is no evidence that any of the money was spent on any members at all.

And the AGE didn’t publish the report, Wicks has and it has been signed off and approved by both the auditor and Michael Williamson so how can Jackson claim it is wrong now?

What’s amazing is that it was in 2009 that the Australian predicted that Lawler would be a problem because of his relationship with Jackson and they also showed exactly how Thomson was set up.

But then they pretended it could not happen.

“The allegation being played up by the Righteous, for their own political ends, is :- Thomson is supposed to have been paying for sex – while all these other elected reps were “playing away””?