Gillard regains the number one position

The Prime Minister regains top spot in our chart this week with a potpourri of issues landing on her doorstep.

The Prime Minister regains top spot in our chart this week with a potpourri of issues landing on her doorstep, garnering the most political coverage in the land. And if some of that coverage has appeared contradictory it reflects a public disenfranchised with its leaders on both sides of politics: on the one hand renewed reports of a leadership spill in part over Gillard’s lack of ability to cut through amid the Craig Thomson scandal, while on the other she has outpolled Tony Abbott as preferred PM, according to many because he is on the nose for pushing too hard over … the Craig Thomson scandal.

We see upward movement for chief government whip Joel Fitzgibbon for crunching K-Rudd’s numbers, for Immigration Minister Chris Bowen over the announcement of foreign mine workers and Liberal senator Eric Abetz for his tenacious pursuit of Fair Work Australia. Water Minister Tony Bourke also heads north on our list over the southern flow of the Murray River which brought the NSW and SA premiers bubbling to the surface too. 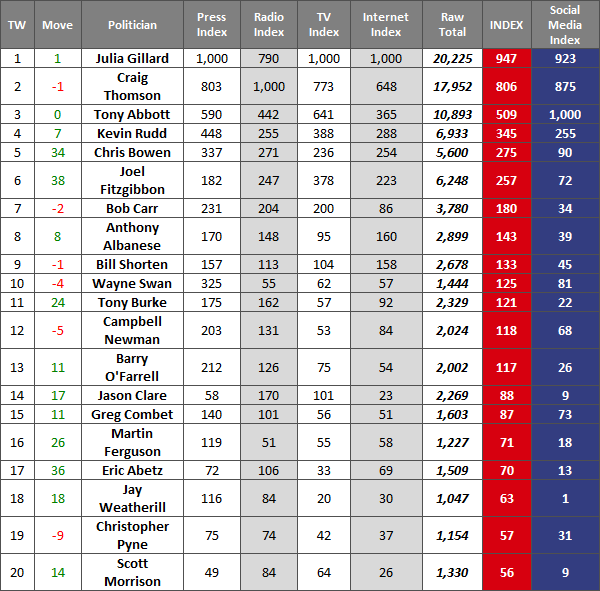 Topping BRW‘s Rich List this week and being the wealthiest woman on Earth doesn’t guarantee you a seat on the Fairfax board but there is little stopping momentum on Rinehart’s Roy Hill Mine.

[1] which would be the hancock prospecting site.