Mining: debate over true impact of carbon tax on mines

Australia’s mining giants have slammed the carbon tax, despite both government and union reps insisting it will have very little impact on industry operations. Callum Clayton-Dixon sorts fact from fiction.

Australia’s mining giants have slammed the carbon tax, despite both government and union reps insisting it will have very little impact on industry operations.

The effect the tax will have on the mining industry as a whole will be negligible, according to Peter Colley from the Construction, Forestry, Mining and Energy Union.

“Companies are making loads of money and can easily afford it,” said Colley, National Research Director of CFMEU’s Mining and Energy division. “There are a few very gassy coal mines that could be affected, but they will get some assistance for the first six years.”

Department of Resources, Energy and Tourism (RET) spokesperson Sean Lounder reinforced this, saying the government does not anticipate that a carbon price will have a major impact on mining industry operations in Australia.

Lounder says part of the price companies will pay will be subsidised through government assistance packages. “The Australian government has also committed to providing assistance to the coal mining sector through the $1.3 billion Coal Sector Jobs Package and the $70 million Coal Mining Abatement Technology Support Package,” he told Crikey.

In contrast, the Mineral Council of Australia estimated the mining sector would face “a carbon tax liability of $25 to $30 billion by 2020-21”.

The Australian Coal Association also criticised the federal government, saying the proposed compensation will be insignificant compared to the overall cost of the tax for the mining industry. According to ACA chairman John Pegler, the government has underestimated the impact of the carbon tax and mining companies will be paying too much.

The tax’s cost impact, Pegler told Australian Mining, “will hit many of Australia’s mines making them uncompetitive on international markets”.

Climate Change Minister Greg Combet has said that under the carbon tax companies would incur an average additional cost of only $2 for every tonne of coal produced: “This cost impact of less than $2 a tonne of coal should be compared to selling prices of more than $300 a tonne for metallurgical coal and around $120 a tonne for thermal coal.”

Colley emphasises that remaining competitive will not be “a significant issue” as “the carbon price will be a very small part of operating costs” and companies will receive government assistance.

“The question of international competitiveness for export industries has been dealt with through the CEF package through assistance for EITE (Emissions Intensive & Trade Exposed) industries,” he said.

There are concerns increased production costs could translate into job losses. However, conflicting claims make this a difficult threat to assess.

Peever has stated that potential investment and jobs growth in the mining sector would also be threated under the carbon tax. The MCA put forward a similar argument in their August 2011 Submission on Clean Energy Future Legislation, contending that “real wages, employment and productivity will grow more slowly under carbon pricing”.

In response to the ACA claiming the tax could cut as many as 4700 jobs in the coal mining industry, Combet declared it as simply an attempt to “frighten workers and regional communities”.

“The ACA would better serve the interests of both its own industry and the nation by embracing the opportunity to be part of the solution rather than mounting scare campaigns designed to block responsible action to lower carbon pollution and tackle climate change,” he said. “I can assure coal miners that their industry has a bright future under a carbon price.”

The Department of Resources, Energy and Tourism states Australia’s resources and energy exports are tipped to reach a record AUD $225 billion (in 2011-12 dollars) in 2016-17. And Lounder says there will be “an additional 82,900 workers in the mining sector by 2016, compared to November 2010”.

Mining also supplies more than half of all Australian export earnings; a proportion the CFMEU says is still increasing.

As well as being a major contributor to the Australian economy, the mining industry is one of the nation’s biggest polluters. Around 100 of the 500 businesses liable under the carbon tax are primarily involved in either coal or other mining ventures.

Rio Tinto, BHP Billiton and Anglo-American Coal are the three biggest offenders according to the federal government’s most recent National Greenhouse and Energy Information report. These companies are required to pay only for the “scope one” emissions they generate. 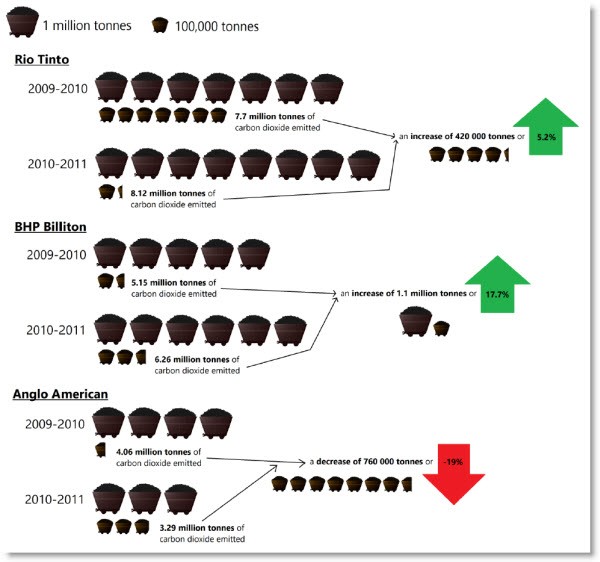 Past estimates of the emissions miners would be liable to pay under the carbon tax, based on both the 2009-2010 and 2010-2011 reports (click to download larger PDF)

As the main sources of scope one emissions have already been identified and incur a carbon liability, there is no need to charge the carbon price twice, claims Lounder. “The carbon pricing mechanism is aimed at reducing emissions with the least cost to the economy,” he said.

Furthermore, Peter Colley says coal mining produces the most emissions “because methane embedded in the coal is released in the extraction process”.

Energy coal, iron ore, petroleum and metallurgical coal are the four main commodities which will bear a liability under the Australian carbon pricing scheme, according to BHP Billiton spokesperson Fiona Martin.

Lekker! A carbon tax in South Africa without the politics

A mining company, though listed as a manufacturer, is makng diesel fuel from coal for 20 cents/litre. Should other mining companies use this and perhaps other technolologies to make their own fuel thereby possibly avoiding taxes, excises etc. etc. There is a lot more to do than just whine about elected governments representing the people of the nations in which mining companies operate.
Politicking is the lazy option which does nothing to promote excellence in the industry which was never built on whining and excuses. Has this all changed with the taint of politics? Will we expect to find political officers in mining company HO’s and site offices? Are the seeds of this degeneration already planted? Miners should do what they are good at and leave government to the government and just be good corporate citizens obeying the law of the land. Break those rules and it is open slather for everyone. Bougaineville comes to mind and Sandilines as examples of this propensity.
Will miners be so audacious as to try this stuff out on the Australian mainland. What sort of government would they have in mind? A southern Hemisphere style “banana republic” with totalitarian regimes in control? Hopefully the religious balance of the Australian population has not quite reached that tipping point yet, but with DLP stooges and economic illiterates set to take government it is getting pretty close. A defacto seccession of the WA mining zones to the sovereignty of the mining (or is that whining?) companies might be good for profits? Oh yes Bougaineville, it will never happen here.

For “political officers” read “public relations consultants” usually graduates of the famous Dr Goebels
School of Journalism. As previously alluded the seeds are already planted and democracy has always had many enemies with motive and opportunity. Best move? just obey the law of the land, do not try to be the law in the land.The present shenanigans over the carbon pricing laws are testing whether Australia is a first world or a third world country and we all know which ones mining companies prefer.