From the Crikey grapevine, the latest tips and rumours … Now what’s Gina up to? Fairfax chair attack. Some breaking news: Gina Rinehart has lifted her stake in Fairfax Media and has chairman Roger Corbett in her sights. Fairfax’s BusinessDay reported just after 12pm that Rinehart — the largest shareholder — now has more than 13% of the […]

Now what’s Gina up to? Fairfax chair attack. Some breaking news: Gina Rinehart has lifted her stake in Fairfax Media and has chairman Roger Corbett in her sights. Fairfax’s BusinessDay reported just after 12pm that Rinehart — the largest shareholder — now has more than 13% of the beleaguered media firm. And she says in a statement:

“There are questions to be raised concerning the current chairmanship that has presided over both an approx. 60 per cent loss in share market value and continuous loss of circulation of all (its) major mastheads, which in turn (affects) revenue.

“Answers need to be given as to how the chairman will address this in the interests of all shareholders, rather than merely hoping for improvements in circulation, revenue and share price or perhaps trying to blame … industry conditions.”

So it’s on. Corbett has blocked Rinehart’s push for a board seat until now. Her public intervention comes as the company is expected to announce a significant restructure of its editorial operations later this week. Job cuts are expected — will Corbett soon be among them?

“One group was aligned to the office of state leader Annastacia Palaszczuk and the Australian Workers’ Union with the other led by Donati being supported by the offices of several federal MPs. State secretary Anthony Chisholm has tried to intervene without success … New state Labor leader  Palaszczuk stayed well away when traditionally she would be the keynote speaker. Senior members of the forum faction are picking sides and the Young Labor split could have wider ramifications for the once dominant right-wing faction in Queensland.”

Crikey revealed earlier this year that Donati took annual leave from AWU to support Ron Paul’s doomed bid for the Republican nomination, although Labor and AWU leaders pledge their allegiance to Barack Obama and the Democrats. Were you at Saturday’s Queensland Young Labor conference? Got any dirt you want to spill? Email us or send us hot tips anonymously.

Don’t reckon on all pr-stitutes having bad memories. Last week brothel barons told Crikey that it was unlikely a s-x worker would remember a client seen once seven years ago. But unlikely doesn’t mean impossible, one former s-x worker told Crikey:

“I just read the report stating a pr-stitute was unlikely to remember a client she saw once seven years ago… and well, it is unlikely. But as a former s-x worker, I can also tell you, it’s entirely possible. I last worked as a student over 10 years ago, and it’s true, I wouldn’t recognise many clients. But others are unforgettable. Some famous, some not. I think that while it’s unlikely a pr-stitute would remember every single client she’s ever had, its entirely possible she’ll remember some. Maybe because of who they are or were, maybe because of what they wanted. Don’t write it off.”

“Why is a Green MP leaking an internal complaint to the media, rather than go through internal party processes? Why this MP?

One reason only. To influence the outcome of the current NSW Greens Senate preselection contest, in which ballots closed yesterday. Candidates in the preselection, including Senator Rhiannon (only in case of a double dissolution election) are forbidden under party rules from speaking about anything to do with the preselection, heavily influencing how she could respond to the article. While Greens MP Jeremy Buckingham was not a candidate, his close factional ally Cate Faehrmann was, as was one of his advisers, Justin Field.

… While the rest of NSW has been oblivious to the Greens Senate preselection, a lively internal blog had been running — where candidates and their supporters have been playing out a broader ideological struggle over the future direction of the NSW Greens. Candidates have lodged formal protests over each other’s campaign tactics and Young Greens have been resorting to amusing euphemisms on Twitter to get around prohibitions on discussing the preselection on social media.”

Were we just pawns in a Greens factional game? Faehrmann won preselection over the weekend. And if you’ve noticed any of these Twitter euphemisms, send them our way …

Students turned Visa customers. Last week we started pointing out the university student cards that suddenly turned into university MasterCard accounts, and more students are sending in their complaints:

“In my final year of study (2010) at University of Sydney, USyd introduced ANZ-branded Visa credit (whoops — debit) card functionality into our student cards. I remember quite a big protest campaign, but obviously to no avail, as the following university-issued guide would attest. I particularly enjoy the statement of “University Safeguards” on page 25, in which they pretend they’re not shamelessly brand flogging.”

And among the fine print, it explains how students can get around having a Visa card as a student card: 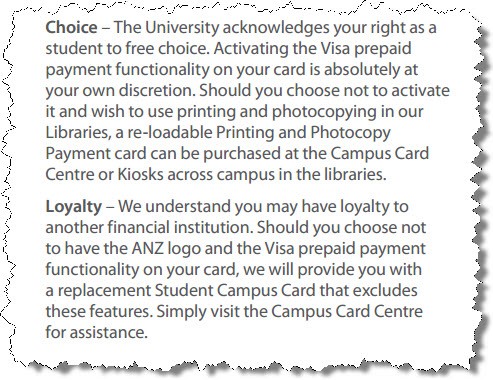 Won’t someone think of the phone books? Apparently there’s been a change to phone books sizing (yes, phone books still exist!), and one Crikey reader is not impressed:

“I would like to see discussion about the new small phone book for rural areas. Recently we challenged Sensis about this and about the unannounced reduction in yellow pages advertising size, which obviously is a form of downsizing and less value for the same money (considering the proof states the same size classification?!). Tasmania was split with normal sized phone book going to Hobart but the rest of us were duped. Apparently they have announced it will return to normal size next year and copped a lot of flak here. We approached Sensis and the ACCC and both have fallen into silence with no response to written complaints. Consumer Affairs Tasmania acknowledged within two days and stand waiting for the ACCC and Sensis to reply. It has now been two months.”

We’ll report back once ACCC and Sensis have explained their sides of the scandal.

From the grassy knoll. Has everyone’s favourite beautician-turned-alleged-drug-trafficker Schapelle Corby had a baby? That’s what one tipster is claiming, saying they heard from a “local whose friend works at the prison” that Schapelle gave birth last September. “I guess the next time we will hear about it will be a photo shoot in New Idea … or Woman’s Day.” Don’t hold your breath.

Gina may indeed get her way and push herself onto the board but I suspect many of us have already stopped listening to the SMH and stopped buying it altogether. I think the only reason why my partner still buys it is for the quiz in the Good Weekend!

You gotta wonder at the smarts of some of these Greens – dragging the party further from the mainstream to flounder – to suit their own personal agenda?

Maybe if Rinehart could mine it she could turn that profit the pros can’t, that
she’s using as an excuse to get a squat?

The Famous Midget Phone Books – Yep What a Classic. They will become a collector’s piece but there’s more…
I contacted them about the insanity of the Midget Book and would you believe they have a solution – I was sent a free magnifying glass.
I wish I had been a fly on the wall at the various management meetings that introduced Midget Book to Australia and of course the solution to the problem.
Monty Python had nothing on this mob!