In today's Media Briefs: Sunday Hun's Shaw Crisis ... No tease from the Tele ... Who coaches the Brisbane Broncos? ... Front Page of the Day ... Big changes at News and Fairfax and more ...

No tease from the Tele. Sometimes in tabloid news you just have to be honest about what you’re serving up to readers. This from The Daily Telegraph website yesterday … 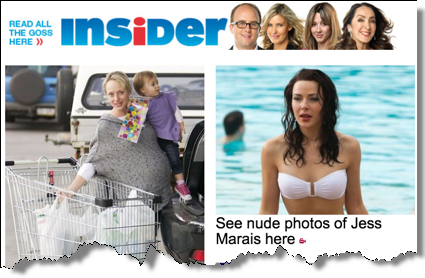 Who coaches the Brisbane Broncos? Were they reading the late sports copy on The Weekend Australian on Friday night? If they were, how did this howler slip through in the page 35 report of the Melbourne Storm win over the Brisbane Broncos in the main rugby league game of the night?

The third paragraph in the Sydney edition started “Broncos coach Anthony Griffin”, which is correct. But two paragraphs later, the report said: “For Broncos coach (no possessive on Broncos, either) Craig Bellamy …” Bellamy is the coach of the Melbourne Storm; his column appeared in The Weekend Oz on page 36. — Glenn Dyer

Front page of the day. UK commuter newspaper I leads today with the horrifying news that more than 100 civilians — including children — were massacred by Syrian forces in the city of Houla. 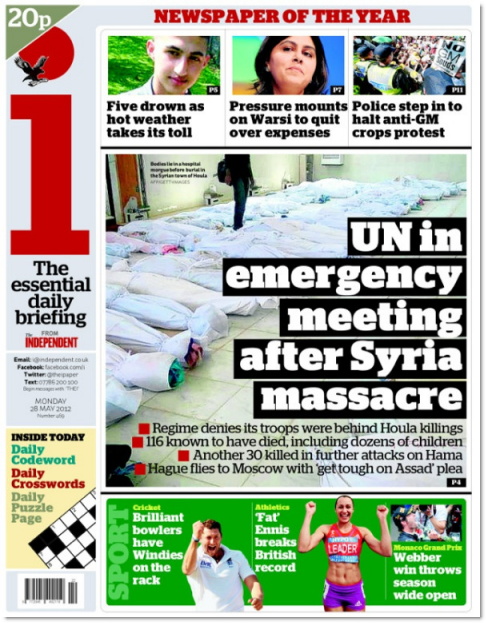 Big changes at News and Fairfax

“Both of Australia’s largest newspaper publishers appear set for upheaval with News Limited preparing for a restructuring involving a reported 400 editorial job cuts and the board Fairfax Media reported to have discussed no longer printing The Sydney Morning Herald and The Age on weekdays.” — mUmBRELLA

7.30 to focus on journalism

“Earlier this year, esteemed, multi-Walkley-winning journalist Sally Neighbour was hired as 7.30’s new executive producer. As she tells it, the recruitment was less a matter of her accepting a brief to fix the program than her revealing to her future bosses her thoughts about the show.” — The Sydney Morning Herald

“Earlier this week, Denver Post Editor Gregory Moore explained how the newspaper plans to spread copy-editing duties throughout the newsroom after it eliminates the copy editing desk and reassigns the remaining editors to individual desks.” — Poynter

“Facebook has launched a new Camera mobile app, which it said will help the process for journalists sharing pictures ‘from the scene of your reporting’.” — journalism.co.uk

Why watch 7:30, when they use people like Reith as experts on such “important matters(?)” as “ethical behaviour” – and now we have back a presenter that acts like Tracy Grimshaw – giggling to the Right and gagging to the Left?
If we want that sort of analysis of news to views we can go to Limited News.

@ Big changes at News and Fairfax. Hooray! at last lots of journalists are being booted out of Fairfax Media and News Limited, given over the last 5 years or so with regard to the quality of journalism in both media outlets I doubt any of them will be missed. Maybe they could write some insightful items about welcome to the “those unemployed” queue.