The opinion polls in Ireland are all pointing to a Yes vote in the referendum on whether to approve the European stability/fiscal/austerity treaty.

Irish support and Greek uncertainty. The opinion polls in Ireland are all pointing to a Yes vote in the referendum on whether to approve the European stability/fiscal/austerity treaty. In Greece the support of the locals for paying the price of European financial support is not so clear cut.

Four polls at the weekend apparently pointed to a government pro supporting the austerity agreements already entered into but a couple the previous day had the antis in front.

The market has the probability of a country leaving the Euro monetary area hovering around the 40% mark.

Ethics and the Murdoch empire. Just a little update. 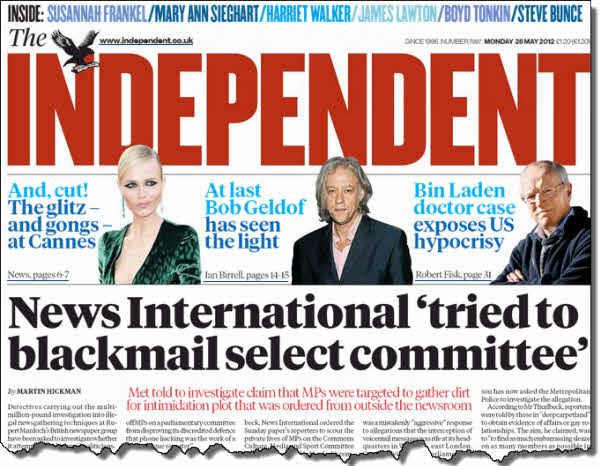 Nothing more need be said really.

No Canberra milk kid yesterday. I wonder how long it will be before the anti-drink brigade starts campaigning to end that frivolous practice of wasting perfectly good champagne after motor racing wins?

After-all, the boy from Queanbeyan does do those I’m a Canberra milk kid ads.

Some quotes of the day

A tit from the Sydney Morning Herald on an alleged planned sacking of 400 journalists by News Limited:

“News Limited is undergoing a substantial transformation aimed at improving our business and the quality of our products.”

And a tat from The Australian (behind the paywall) about goings on at the Herald headquarters:

“The board of Fairfax Media has discussed dropping weekday print editions of its newspapers during a meeting last week as the company pushes readers towards digital editions.”