Howes’ historical revision on life as a ‘young teenage Trot’

Union kingpin Paul Howes has made no secret of his heroic past organising for Trotskyite youth agitators Resistance during the 1990s. But one incident in particular might require a bit of historical revision.

Union kingpin Paul Howes has made no secret of his heroic past organising for Trotskyite youth agitators Resistance during the 1990s. But, according to new pictorial evidence obtained by Crikey, one incident in particular might require a bit of historical revision.

Crikey readers may recall that last year in the middle of a Tory scare campaign over Lee Rhiannon’s socialism before her ascension to the Senate, The Australian and The Daily Telegraph quoted Howes rubbishing Rhiannon’s claim that he had occupied the NSW Treasury during a 1997 protest over a Bob Carr law-and-order crackdown.

The campaign was a reprisal of a tete-a-tete waged 12 months earlier in the lead-up to the 2010 election, when Howes accused the Senator in waiting of being a Stalinist “watermelon” in his regular Sunday Telegraph column.

Rhiannon responded that Howes himself was far from a shrinking violet:

“He was part of a protest that occupied the NSW Treasury concerning increased police powers brought in by the Carr government … when members of various groups in 1997 set up the Youth Tent Embassy in the Domain for one week Howes to his credit was an active member.”

But the AWU sound-bite master was furious at the implication, telling the Tele he had unequivocally “never occupied Treasury. I was involved in occupations (as a protester) and I’m not ashamed of that. But not Treasury. I don’t even know where Treasury is.”

In a letter sent by Howes to Rhiannon, obtained by The Australian and posted on Andrew Bolt’s blog, he was even blunter. “I’m not quite sure where Treasury is and maybe I protested outside it, but I’m certain I never occupied it,” he railed, calling the allegation “plain wrong”. 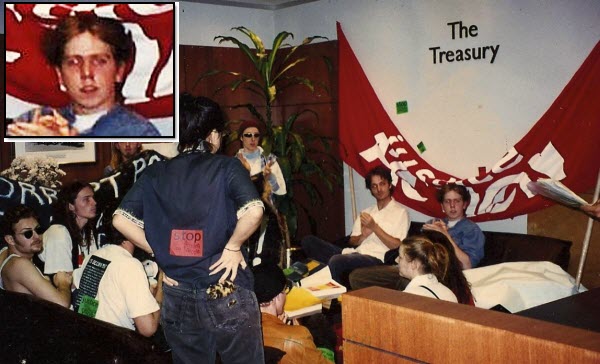 The rabid defender of Aussie jobs confirmed the photo this morning, but told Crikey he had “no memory of that …when you’re a young teenage Trot you do end up going to a lot of protests”.

“The difference is I’m not a Communist now, but she still is,” he spat at Rhiannon.

The Greens MP was busy in Senate estimates this morning and did not return calls. But some Googling reveals the 1997 occupation in question was an outgrowth of the Youth Tent Embassy erected to condemn the ratcheting up of curfews to deal with feral youngsters.  As the redoubtable Green Left Weekly reported at the time:

“On April 24, an attempt to give about 500 letters and 1000 signatures to Premier Bob Carr ended in an occupation of the Treasury Department.”

Howes then, as now, was right in the thick of it.

The brains behind the anti-carbon tax rallies

LOL at claims he did not remember the sit-in. Even if you were involved in numerous sit-ins or protests you would remember wouldn’t you – unless perhaps illegal substances were involved.

However, this is such a beat-up. Visualising kindergartens and sandpits.

Do any adults still identify with their teenage self. People do change and develop their worldviews. Does it matter if Howes was a Trotskyist or Lee was a Communist, or even if their views still lean to those dogmas.

Visualising kindergartens and sandpits, I think they have just upscaled to local councils and parliaments!

““The difference is I’m not a Communist now, but she still is,” he spat at Rhiannon.”

Journalists are free to use any “describing speech word” when quoting in an article, particularly if the aim of the article is to skew perceptions towards the party or parties you favour, and most particularly when covering some enmity between public figures.

When the describing speech word selected is of a metaphoric nature, say, a vulgar action like spitting, feel free to further imply that the action was directed at the favoured party e.g. “{quote unfavoured party}” he spat at {insert favoured party}

Thanks, PK93, I cringed when I read that.

Trots are notable for their high degree of churn…young and rabid, they almost always morph into their opposites by their early/mid 20s. From then on it all depends on career: they’re just as rabid defending the interests of their new masters, whether corporate or political. The Hitchens brothers (Christopher and Peter) are two examples. Both ended up as apologists for the far Right (though God was optional).

The distinguishing feature is fierce absolutism, utter certainty and constant harangue. The Messianic fervour is simply redirected like a fire-hose at each career change.

Expect Howes, when the conveyor belt arrives in Canberra, to transform into a Lib-banging militant apologist for corporatist Labour. Later still, he’ll be a plump Minister in a pin-stripe suit. Finally, he’ll be a plump Prime Minister with an avuncular manner and an iron grip on the numbers. Don’t get in the way.