The head of the UN’s mission in Syria, Major General Robert Mood has placed the full figure of fatalities at 116, with more than 300 also injured.

British Foreign Minister William Hague said he was “sickened” by images from Houla as he departed for Moscow, promising to place pressure on Russia to intervene. “It’s not in the interests of Russia, just as it’s not in the interests of anybody in the world for Syria to descend in to an even bloodier situation and in to full-scale civil war and that is now the danger,” said Hague.

He reaffirmed his support for Kofi Annan’s Six-Point Peace Plan, a move copied by the Obama administration. Secretary of State Hillary Clinton released a statement condemning the Houla massacre:

“Those who perpetrated this atrocity must be identified and held to account. And the United States will work with the international community to intensify our pressure on Asad and his cronies, whose rule by murder and fear must come to an end.”

President Obama has increasingly come under fire from Republicans over his policy decisions in Syria, with former presidential candidate John McCain and current White House hopeful Mitt Romney sending scathing broadsides through the media. On Sunday, McCain told Fox News Sunday that the United States’ Syria policy “abandons American leadership”, going as far as to label it “a shameful period in America’s history”.

Romney echoed McCain’s sentiments in a statement released on Sunday calling for the US to “organise and arm rebel opposition groups to defend themselves”. This represents a back-flip of sorts for Romney, as earlier this year The Wall Street Journal reported that he had broken with McCain, one of his strongest supporters, by refusing to advocate direct military involvement.

Closer to Syria, Turkey has also condemned the massacre in Houla, although Financial Times journalist Gideon Rachman, writing from Turkey, is sceptical that Houla will serve as a tipping point:

“The factors that have prevented effective international intervention to date are still in place. They include big-power rivalries, a divided opposition and a powerful Syrian army. Certainly talking to people last week in Turkey — which is the base for most of the Syrian opposition — I got the sense that people were increasingly resigned to a long and bloody conflict.”

Turkey and neighbouring Lebanon are further embroiled in the ongoing case of the 13 Lebanese Shia Muslims kidnapped in Aleppo, whose whereabouts along the borders are unknown. Tensions between the countries are also guaranteed to escalate following reports that on Sunday night Syrian border guards in the town of Kafarqouq killed one Lebanese national and kidnapped another, supposedly for attempting to smuggle out tobacco.

Inside Houla, Channel 4 journalist Alex Thomson has filed a blog chronicling the deep divisions between areas controlled by the Free Syrian Army and those held by government forces:

“We met one man, an engineer called Ahmed Masood, who showed us his house, which he said had been attacked by terrorists.

When questioned closely, he admitted he was not there when it happened. His house is also right next to a military base and in an area where there are no civilians.

When you put this together it seems curious that a large number of rebel forces were able to come into this area and attack somebody’s house.”

The Syrian government in Damascus has brazenly ascribed responsibility to “terrorists”, with Foreign Ministry spokesman Jihad al-Makdesi stating that the government is “not at all” responsible.

An emergency meeting of the United Nations Security Council yielded a surprising result, with Russia signing the statement condemning the attacks “in the strongest possible terms”. This comes merely days after The Moscow Times reported, via Al Arabiya, that a Russian cargo ship loaded with weapons was due to arrive in Syria over the weekend. The Sydney Morning Herald has published the Security Council’s statement in full, and it is unclear whether the Russian ship has docked.

These developments pushing Syria back into the news suggest that leaders may yet be moved to act decisively beyond UN observer missions. The Independent yesterday published a dramatic front page, damning the international community for “averting its gaze” as Assad’s troops run unchecked during a time of supposed ceasefire: 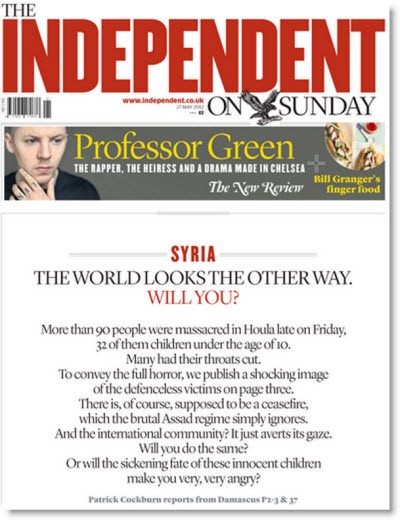 The New York Times somewhat more hopefully speculated that Obama will attempt to propose a model for transition that would ease out al-Assad, with the reinforcement of Russian support. Regardless, the UN Security Council will have a tough time reining in an unapologetic Syrian government that continuously and blatantly pleads innocence.

How would Lib backbencher Bob Baldwin go against Islamic State?

Anyone who believes that the US, Israel & Saudi Arabia are not involved in this uprising, is palpably naive.

Check it out & make up your own mind in the following Ron Paul address to US Congress in 2003:

Remember, the neocon planning took place before the rise of the Internet.

As I wrote on The Punch at:

I defy anyone to read this article:

… and view the embedded videos and view the linked articles and then to tell me that they will ever again believe a word told to them about any major intentional conflict by the lying corporate and government media presstitutes. (ends)

The depravity of the corporate media liars after the murder of 50,000 Libyans by NATO last year and the murder of 2,000,000 Iraqis since 1991 seems to have no limits.

They betta watch out cause Nato said next time time this happens they really gonna be doing something about it!!!

And now, on the orders of its US masters, the Gillard Government expels Syrian diplomats prior to even a cursory inquiry into the massacre.

Reports are emerging that while the Syrian government was shelling the area due to increasing ‘rebel’ (read: those fifth columists financed by the US, Israel & Saudi Arabia) attacks, that the massacre of the civilians was committed by ‘persons unknown’. No prizes for guessing who are the chief suspects.

Australia’s hypocrisy is breathtaking, given that it defended the Israeli defence forces massacre of more than 1000 civilians & 318 children in Gaza over Xmas/New Year 2009/10 as Israel’s right to defend itself from attack.

Given that the supposed ‘attack’ had been the firing of piddling Quasim rockets into Israel as a response to the targetted killing ()i.e. State sanctioned murder) by the IDF of 6 Hamas freedom fighters the day before, one comes to understand that both the Gazan & Houla massacres are simply sideshows in the US neocons on-going stated plan to wage permanent war in the Middle East, all for the control of oil output. Did I forget to mention the neocons need to justify huge military budgets to line the pockets of their MIC mates

Again I ask that you view the below 7 min video of US Congressman Ron Paul as he lays out in 2003 the neocons plans for, inter alia, the Middle East & world economic & military domination:

Watch the upcoming GOP presidential selection conference to hear Ron Paul again wipe the floor with his take on the neocons evil policies….of course that if the neocons don’t have him murdered. A rapidly increasing number of US citizens, partcularly among the under 30’s, are joing Paul in his crusade to unlock US foreign policy from Israeli control, close the 134 US military bases globally, and bring home all the troops to defend the US.