Although the cost of flying could jump by 24% under a carbon tax, the impact on the domestic flight industry will be minimal in comparison to compounding taxes internationally, writes Crystal Landers.

Although the cost of flying could jump by 24% under a carbon tax, the impact on the domestic flight industry will be minimal in comparison to compounding taxes internationally.

Airline prices are set to rise between $1.82 and $6.86, depending on the length of the flight, due to impacts of the carbon tax to be introduced on July 1. Major airlines will pay $23/tonne of CO2 emissions as some of the largest polluters in Australian business.

In total, the carbon price will have a cost impact of $110-115 million on the Qantas group and $45 million on Virgin Australia in the 2013, the airlines say. This translates to an increase of $2.79 on a flight from Sydney to Melbourne. 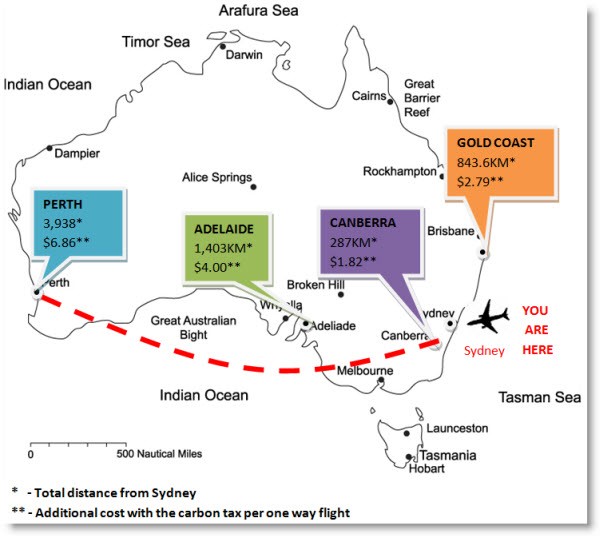 While the domestic flight price increases are not significant, experts say the combination of it and international tariffs is the killer. Justin Wastnage, national manager of aviation for the Tourism and Transport Forum, told Crikey that although the carbon tax would have little effect on aviation domestically, the larger issue was the global impact.

“On a return ticket from Europe to Australia, there may be the UK air passenger duty (which is now up to $180) or the German ecology tax or the Austrian Green Skies tax, plus the EU-wide trading scheme, then plus the carbon tax from Australia,” he explained. “While it is difficult to imagine the oil-rich Middle Eastern airline hubs charging a carbon tax, it’s not impossible that Hong Kong could be brought into China’s carbon tax, or Malaysia or other stopovers.”

This would take the number of international taxes to four and mean a significant increase in ticket pricing, Wastnage says. As a result, the potential impact on the tourism industry is a contentious issue .

When questioned by Nationals leader Warren Truss, Prime Minister Julia Gillard insisted the tourism industry would not be affected by the tax: “The reality is the impact on airlines that the member has raised is modelled into the price impacts and people are receiving compensation in the form of tax cuts, family payments increases and pension increases.”

Virgin and Qantas maintain there will be no immediate change to company operations or job losses. But a Virgin representative told Crikey that whether there will be a dip in flight sales was still to be seen.

“It is too early for us to accurately forecast the impact of passenger demand as a consequence of the carbon tax,” they said.

Australia’s two largest air carriers also both told Crikey that there would be no change to the frequency of flights and regional areas will be not be affected by the upcoming tax. Spokespeople from both airlines stressed that the cost will be a consequence of distance, not origin or destination.

The Australian Tourism Export Council is worried. Managing director Felicia Mariani said in a statement: “With regional carriers already facing considerable pressures, the viability of many routes will undoubtedly be called into question with flow-on effects for the regional tourism operators who rely on these regional carriers to deliver their customers.”

The Tourism Transport Forum reports that “although aviation emissions remain proportionately small compared to road transport, in Australia the aviation sector has the most rapid emissions growth rate of any transport activity”. It also states that 57% of the tourism sector’s direct emissions come from domestic air transport.

Both Qantas and Virgin have implemented programs to cut emissions. The replacement of older fleet is seen as important, along with the development of biofuel. Virgin hopes to source 5% of its fuel requirements from renewable sources and Qantas predicts it can increase fuel efficiency by 1.5% a year by 2020.

The airlines have also put in place carbon offset schemes, where customers can choose to pay for their own fuel usage.