Consumers will have to change their buying behaviours for businesses to remain competitive when the carbon tax is implemented on July 1, according to one researcher. Caroline Kovac reports.

Consumers will have to change their buying behaviours for businesses to remain competitive when the carbon tax is implemented on July 1, according to one researcher.

Author of Little Green Lies Professor Jeffery Bennett says consumers need to be aware of the difference between low and high carbon emission products. However, he believes the biggest factor in buying decisions will be the price.

Professor Bennett says the carbon tax will impose costs on Australians families without generating any benefit in regards to climate change.

“The carbon tax will only have an impact if the firms do pass on the tax to buyers,” he said. “So the impression of the tax will cause costs for Australian households.”

According to Brian Andrew, professor of accounting and finance from the University of Wollongong, “whenever possible businesses will pass taxes on to consumers”. But while price increases might influence buying patterns, he says this will not have a dramatic effect on household budgets.

“The carbon tax will have little or no impact on families as most will be over-compensated … with a small increase in income,” he said.

Professor Bennett says the overall impact on the CPI should be below 0.9% in the month in which the tax is introduced, less than one-third of the impact of the introduction of a GST.

According to the Treasury modelling figures provided by the government, the average household costs are expected to increase by less than $10 per week on July 1, with that to rise to $13.40 per week by 2015.

The Choice website’s online calculator estimates that a couple with children under the age of 65, who earn $70,000 a year on a dual income, will incur a cost of about $10.24 per week when the carbon tax is implemented, and could receive between $12.37 and $15.87 extra in government assistance per week.

A single parent of the same age and income could incur costs of around $5.95 and will receive government assistance of between $7.52 and $10.60 extra per week. While a couple with no children, who are under 65 years old, and earn $70,000 between them, will pay $9.11 per week when the carbon tax is implemented, and could receive government benefits of about $11.65 extra per week.

A single person of the same age and income will incur costs of around $5.89 and should receive $5.12 per week in government assistance. 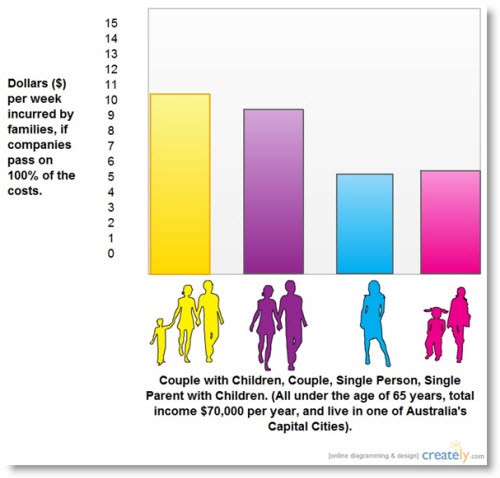 Treasury says these costs are made up of increases in electricity prices and higher gas prices, which are expected to rise by $4.80 per week. Food costs are expected to increase by $0.80 per week. As an example of grocery bill increases, the price of bread will likely rise by $0.02 per loaf after July 1, according to Choice. That’s $0.14 a week and a $7.28 increase per year, if a loaf of bread is brought once a day.

“Manufacturers of bread and wheat will be impacted in some way due to their reliance on electricity and fuel,” Sivasailam said. “However, the exact nature of the impact will depend on their ability to absorb these costs to remain competitive.”

“We have continued to reduce carbon emissions through investment in low carbon technologies in our existing stores and building more energy efficient stores. We have reduced carbon emissions from our logistics transportation and from our company cars.

“[Our] supermarket opened its 51st Green Store in 2010. Green Stores feature the latest in energy efficient and low carbon technology.”

Sivsasailam says if the carbon tax works correctly and forces companies like Woolworths to find ways to reduce their emissions instead of passing all the costs to the consumer, it could mean smaller companies will find it hard to survive once the tax is applied.

“If a large bread producer decides to absorb most of the extra costs of the carbon tax, then it will continue to sell its bread products at the same prices while smaller players will be forced to increase their prices as they are incapable of profitably absorbing the extra costs of the carbon tax, and therefore they risk losing market share,” Sivsasailam said. “And this will apply to the lot of energy-intensive industries.”

George Weston Foods — producers of brands including Sunblest, Taste and Burgen — says the impact of the carbon tax on product prices is still unknown. The company is not included in the top 500 carbon polluters but will be impacted by energy and supplier costs.

“We move prices from time to time based on many factors including raw material costs, manufacturing costs, market conditions,” a spokesperson told Crikey. “We are not currently planning to specifically move our prices up in direct response to the carbon tax.”

Sivsasailam says the exact impact of the carbon tax will not be seen until after it is implemented. “Further,” Sivsasailam said, “there are issues pertaining to accurate measurement and reporting of emissions that cannot be addressed presently.”

Professor Bennett says even if people change their buying behaviour the effects on the environment, after the tax is applied, will be marginal.