Treasury expects the price of milk will only rise by 1c a litre under the carbon tax, but the dairy industry believes that doesn't reflect the true impact the scheme will have on farmers. Emily Gayton reports.

Treasury expects the price of milk will rise by only one cent a litre under the carbon tax, but the dairy industry believes that doesn’t reflect the true impact the scheme will have on farmers.

Although supply chains and consumers will be impacted, the greatest effect will be on farmers, whose costs will increase because of their high reliance on electricity. The Australian Dairy Industry Council says taxes on production inputs will increase the average dairy farm’s costs by $3000-5000 a year.

The dairy industry is the third-largest agricultural sector in Australia, worth nearly $4 billion, with forecasted revenue increases in future years. Dairy Australia says the outlook for 2012 is quite positive; however a difficult few years could mean some farmers are unable to meet production cost increases under the tax. 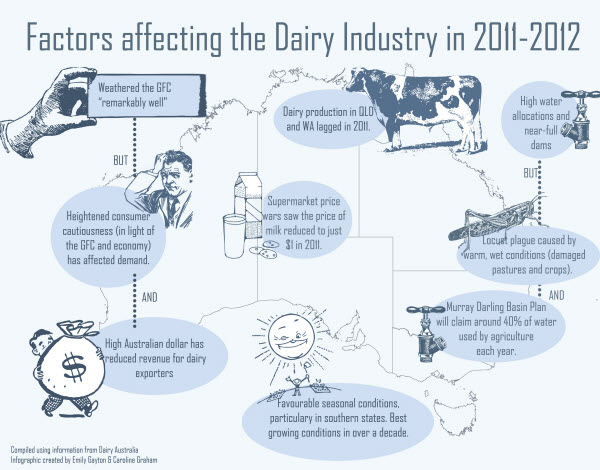 The dairy industry has been excluded from the government’s Clean Energy Future Program, which means farmers will not have to pay a direct tax for the emissions of farm operations. The ADIC believes this has led to a common misconception that the dairy industry will be unaffected by the carbon tax. Taxes on key production inputs (such as fuel, packaging and electricity) will have a significant impact on farmers.

The ADIC has called for the carbon tax to exclude electricity used by primary industries such as dairy. Dairy farmers consume a high level of electricity, which is why ABARES believes it will be impacted more than any other agricultural industry in Australia. 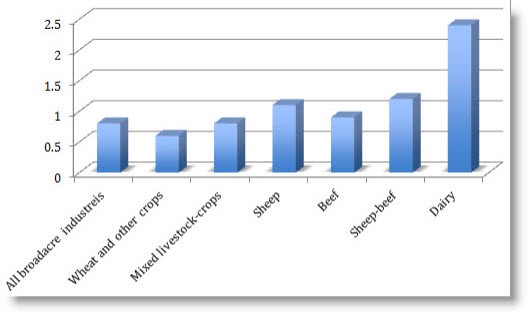 With the price of electricity to rise by about 10% under the carbon tax, farmers will be forced to pass some of the estimated $3000-5000 per year increase to consumers. The industry says the increased costs are in addition to other financial issues they are facing and there is concern they will not be able to recoup the full costs of the carbon tax.

Kay Tommerup’s family own and run Tommerup Dairy Farm in south-east Queensland, supplying milk for Norco Co-Operative. The farm was established in 1874 and boasts more than 100 years of dairy farming on the property. Tommerup says the carbon tax could be the last straw for her family.

“My husband is the fifth generation here and they have been dairying for most of that time here. It’s still three generations that live on this farm, my husband’s parents and our children. [His parents] now handed it on to us, which they did after the impacts of the industry being deregulated and then we went through one of the worst droughts in history. So we took over in 2006 and I guess we’ve started to claw our way back a little bit after a bit after almost going broke from those things,” Tommerup told Crikey.

“So for us, the carbon tax is really just another thing, which we have to battle.”

The industry is recovering from deregulation, with prices increasing. “So those of us who hung on by the skin of their teeth had been thinking, ‘OK, if we keep holding on long enough the prices will come up’,” she said. “They have started to do that but we now have Coles having this fabulous idea of the price wars. Now we have another round of farmers going broke and we’ve just got to see if we can hang on again and hopefully commonsense will prevail, and then here comes the carbon tax.

“Everything you do on your farm stems from how much you’ve got in the kitty. The electricity costs for us are already astronomical compared to the size of our farm, and if they continue to grow as they have been I don’t think that we’ll be able to afford to continue on with the way we do it now. We’ll have to keep on researching and looking for other ways and who knows if we’ll be able to do that. We just don’t know at this stage.”According to Austrade, 50% of dairy products are exported overseas, amounting to 11% of Australia’s total food exports. The dairy industry will struggle against competitors in local and overseas markets, according to industry lobbyists, especially in the absence of a global emissions trading scheme.

In an interview with the ABC, Australian Dairy Farmers president Chris Griffin said the industry would struggle in export markets: “We can’t unfortunately go to our customers and say ‘the Australian government has imposed a tax on us, we want extra money’, because the customers will potentially go elsewhere, because it’s a competitive market out there for exports.”

To minimise the impacts of the carbon tax, the government has announced several schemes for the dairy industry:

The ADIC also believes dairy farmers have a responsibility to reduce their carbon footprint independently of government initiatives. In a submission to a Senate inquiry into the carbon tax pricing mechanisms, the ADIC said it “broadly supports a comprehensive government and industry response to climate change”.

Many dairy farmers acknowledge it is in their best interests to confront climate. Irrigation is the greatest concern for dairy farmers — climate change is predicted to impact the amount of rainfall, change the quantity and quality of pasture and increase the number of weather events such as flooding and bushfires.

But Tommerup says her farm may not survive to see it.

“My 19-year-old nephew earns more money working just as a sales kid than we do, and we work both of us, seven days a week, all day each day and our kids help us on weekends. I think it’s just absolutely disgraceful that we work so hard to get so little return and the carbon tax will come through and make that worse again,” she said.

The article’s link which purports to show that electricity prices are about to rise 10% due to the carbon tax does nothing of the sort.

It leads to a whinging diatribe prepared by the partisan spruikers for the dairy industry, DIAC, who in several pages completely fail to provide data, evidence or calculations.

One small indication is that electricity costs are about 2% of the cost of running a dairy farm.

Assuming that milk wholesales at, say, 40 cents per litre, then electricity amounts to about 1 cent per litre.

If this article was attempting to demonstrate that the effect of carbon pricing on electricity will cost the farmers more than 1 cent per litre, then it has been an abysmal failure, because to do this would require electricity costs to escalate not 10% but to more than double.

I’m sure that the author was trying to say something, but what exactly was the argument again and where are the calculations?

Dairy farmers are making out like bandits. In my district I don’t think there would be a tractor more than five years old. It’s a crap job, twice a day for 365 days a year, but they’re highly profitable compared to pretty much any other broadacre agricultural activity.

And milk is $2/litre. I think it could afford to go up a few cents.

The entire point of the carbon price is to send a SIGNAL. Signals actually need to have information attached to them if they are to have an effect.

tony abbott’s going to swing in and save the day in less than a year and a half, so i really don’t see what the problem is.

@William: What, no irony emoticon?