Andrew Wilkie might not have got his way with poker machines but he is following in the grand tradition of Brian Harradine in winning for his state a few hundred million dollars here and another couple of hundred there.

Playing the Tasmanian game. Andrew Wilkie might not have got his way with poker machines but he is following in the grand tradition of Brian Harradine in winning for his state a few hundred million dollars here and another couple of hundred there. Just have a look at these two stories from this morning’s dailies:

How nice it is to hold the balance of power.

A ban I can understand. In Los Angeles this week they have banned free plastic bags from use at supermarket checkouts. For a Canberra boy, there’s nothing special about that. In my city they’ve been doing that for months. But what is different between LA and the ACT is that over there the bag you have to buy if you have not brought your own is made of paper. In Canberra they sell you one made of supposedly re-usable plastic. My guess is that the only difference at our municipal tip is that Canberra now has fewer but thicker bags with the total plastic content being unchanged. 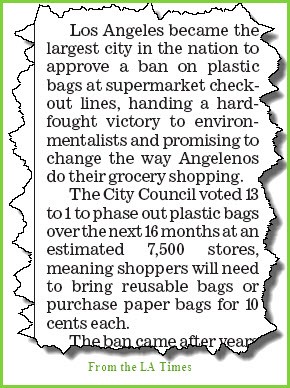 And how long will it be before supermarkets are forced to get rid of those plastic bags in which we put our fruit and veggies before we get to the checkout?

Differences in lobbying style. I have been reading with an almost morbid fascination the revelations about the emails that Murdoch’s London lobbyist Frederic Michel sent over those many months to James Murdoch that culminated in the Michel appearance overnight before the Leveson inquiry.

Oh, the trouble those emails have caused to everyone involved — from Frederic himself, to James, to James’ dad, to the UK Culture Secretary Jeremy Hunt. And all of it so unnecessary for there was really not the slightest need for any of the information Michel conveyed in his emails to be put into written words at all.

Now I don’t want to read like some old smartie singing his own praises but I have had the perhaps unique distinction during the past 50 years of making representations as a lobbyist on behalf of, and passing on information to, the Murdochs, the Packers and Kerry Stokes. And I cannot recall — though perhaps my memory fails me — of ever putting anything of the slightest importance in writing. Important reports were always given verbally, face-to-face, or sometimes by phone, never in writing.

The problem for Frederic Michel, I guess, was that he felt the need to big-note himself to an executive who did not understand the need for a little delicacy when it came to handling political matters. Clearly James was an executive who wanted to assert his superiority by getting things in writing.

I was fortunate to normally work for sorcerers who knew what the game was about without having to go through bureaucratic apprentices. Just proof that News Ltd’s Ken Cowley was so much smarter than the son who replaced him and the one who was sent to London.

The politics of Schapelle Corby. I have no idea about the guilt or innocence of Schapelle Corby. What I do admire is the way she keeps maintaining she is not a drug smuggler even though doing so has ensured her a longer stay in the slammer than if she made a confession.

What I also admire is the way that Australia’s and Indonesia’s diplomats have ever so quietly and patiently improved the relations between their countries to the point where Schapelle Corby might soon be let out of jail. It is quite an achievement as this time-line from the Jakarta Post makes clear: 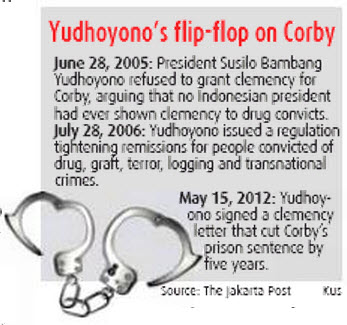 These questions of releasing respective nationals from the other’s prisons are not easy ones. Both Australian and Indonesian governments have their own local political pressures to overcome before feeling able to do the sensible thing in releasing youthful Indonesian seamen and young Australian drug carriers.

A quote of the day: From London’s Daily Telegraph on Her Majesty’s new dog: 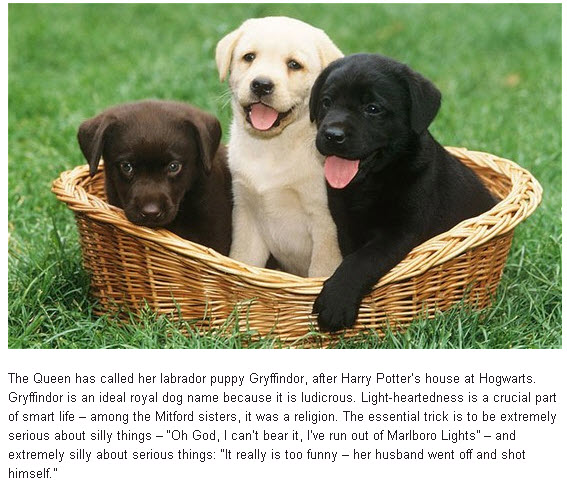 I need at least two weeks’ notice of Shapelle Corbey’s release so that I can relocate to a remote town with no TV channels or better still leave the country.

David Hand, please tip me off if you find that Shapelle-free zone.

What’s the bet 60 Minutes’ producers are already reaching for their chequebook. Come to think of it, I wouldn’t mind if a cage match was televised (better than reality TV) featuring the producers from 60 Mins, ACA and TT fighting for the interview.