The fossil fuel sector isn’t hiding from a carbon tax. In fact, it’s planning a revival.

In July 2011, when plans to introduce the carbon price were announced, Clean Energy Council director of strategy Kane Thornton congratulated the government and said the new policy would “turbo-charge the clean energy sector”.

Now, a month before the official implementation of the carbon tax, the City of Sydney’s announcement to install Australia’s first low-carbon energy network seems to provide evidence for this “turbo charge”.

In collaboration with Origin Energy the city has created a plan that supplies 70% of the local government area with electricity until 2030. The tri-generation technology has a high energy conversion efficiency, providing power, heating and cooling to buildings at the same time.

But although the technology can operate on bio-fuel, fossil gas is the main energy source at present, leaving the dream of an entirely renewable system to the future.

The anticipated changing of the guard from fossil to renewable energy sources is undermined by operators of fossil energy sources finding ways to reduce CO2 emissions and increasing the efficiency factor of their plants.

The state government recently allowed the size of a planned brown-coal and gas-fired power station in Victoria’s Latrobe Valley to double. This station is also based on new coal gasification technology, which promises to produce cheaper, cleaner power.

Green energy initiatives claim they are also at a disadvantage because of the Australian mineral industry’s attacks on the renewable energy sector.

In its submission to the government’s energy white paper, the Australian Coal Association criticises the two most discussed renewable energy sources, solar and wind power, for their intermittency, scale and public acceptance issues. For the CEO of Brown Coal Innovation Australia, Dr Phil Gurney, renewable energy is not always as emission free as its advocates try to make the public believe.

“Solar panels, for example, need an operation time from 17 to 20 years to become carbon-neutral and financially profitable,” Gurney told Crikey. “Making existing fossil-fuelled power plants more efficient would be by far the cheaper option. The main intention behind the carbon tax is still a reduction of the carbon emission and not necessarily an increase of renewable energy.”

Virginia Streit, from Energy Matters, a company that has installed more solar power systems than anyone else in the country, is worried about the reinvigorated fossil energy sector. “We don’t need these polluters in Australia any more and fight them wherever we can, like in the current case of the planned coal-fired power station in Victoria,” Streit told Crikey.

She said most lines of argument against renewable sources were based on prejudices and not applicable any more: “The simple truth is that, when looking at the whole carbon life cycle, the footprint of renewable energy sources is tiny compared to the one of coal and gas.”

A 2010 study by the Cameco Corporation comes to the same assessment. Representing the uranium industry, the organisation approached the problem of inconsistent results by calculating averages on the basis of 21 different studies, undertaken by governments, universities and the energy sector from 2000 to 2009.

It found that brown and black coal produce 1069 and 888 tonnes CO2 emissions per gigawatt hour, and that solar photovoltaic (with only 85 tonnes) was the main contributor among the renewable energy sources. 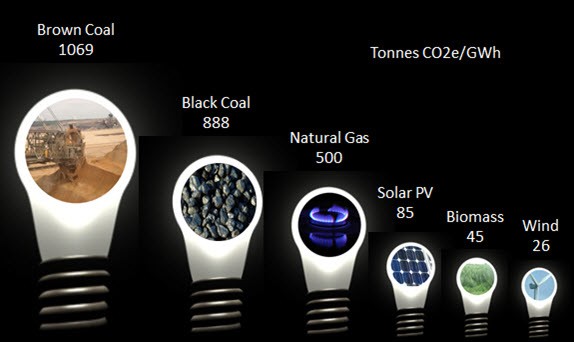 For Wasim Saman, a sustainable engineering professor at the University of South Australia, those results allow only one logical conclusion: a turnaround towards renewable energy. But he doesn’t look on the carbon tax as a universal remedy in this process.

“Whoever expects a rapid change because of the carbon tax underestimated the power of a self-adjusting energy market, which still falls back on a surplus of relatively affordable fossil resources,” Saman told Crikey. “Another issue is that most of the good locations in Australia aren’t accessible for wind or solar parks at the moment.

“Instead of just burdening the coal and gas industry, the government should rather provide the renewables with more direct support and incentives, otherwise I see the intended goal of 20% renewable energy not reachable until 2020.”One step in this direction could be the newly founded Clean Energy Finance Corporation, which represents a non-governmental expert committee whose job it is to invest $10 billion in promising renewable energy technologies from July 2013.

But professor Saman also sees the renewable energy sector as part of the obligation to provide a baseline electricity supply, which works independently of natural ups and downs. According to Saman, a well-matched mix of different methods — including biomass and hydroelectric — could reach this goal.

“Apart from the domestic situation, we keep on exporting coal to the rest of the world, which just leaves the pollution process to other countries,” Saman said. “Unfortunately the effects of global warming don’t care about national borders.”

Accordingly, the Australian Coal Association’s Carl Gibson’s estimate to provide affordable coal at least for the next 100 years must sound like a threat in the ears of the renewable energy scientist.

“We principally endorse the ideas behind the carbon tax, but it comes too early,” Gibson told Crikey. “An introduction in 2020 would have given us more time to adapt and to push on with the development of environmentally friendly technologies, like carbon capture and storage.”

Maybe timing could also be an explanation for the current renaissance of fossil energy sources, whose operators could try to profit at the last minute from arrangements made in a pre-carbon tax age and being hardly compatible with the eco-friendly policy of the current government.

At least in the case of the recently approved coal-fired Victorian power plant, the operator had to meet the project milestones before the middle of this year in order to receive the $100 million funding promised by the Howard government in 2007.

Streit wonders why the court decision in favour of the new build came now, especially as the plant does not even meet the environmental requirements proposed by the previous Labor government in 2010.

While it is often doubted that wind and solar can provide base-load power, the opposite is true. The major challenge for a 100% renewable grid is the supply of electricity at peak times. Sure, we have great hydro facilities in the Snowy Mountains, and they are already used to help during peak times, but there is still the requirement for a huge capacity of gas fired peaking plants around Australia.

To properly consider trigeneration schemes like the City of Sydney’s, you have to consider the whole picture. It is more than a gas fired electricity generation plant. The capture and use of waste heat increases the energy efficiency greatly, and reduces peak demand on the hottest days due to displacement of electric chillers.

This is a typical example of the coal industry being either staggeringly ignorant, lying or both.

There are a myriad of studies that show the entire carbon cradle to grave footprint of a solar panel is about 2 years and decreasing.

Financial profitability varies on the application but can be as low as a few years due to the rapidly declining costs and escalating price of, wait for it…….. coal fired energy.

Their distortion of the truth and prejudice is so staggeringly obvious it’s hilarious and is helping renewable’s enormously because we can simply stick to facts and truth.

Ok, I give up. Why exactly did the graphic leave out mention of the life cycle emissions of nuclear power? Perhaps they weren’t calculated? No, I checked, the report calculated the average of 14 studies as 28 tonnes CO2eq/GWh.

Geoff, that’s probably because we don’t want another Chernobyl or Tokyo.

BTW, it’s a bit discouraging to reach this page and see a large ad for fossil fuel (“natural” gas). 🙁

Never forget, the main purpose of carbon pricing is business as usual.