Australian universities are preparing for steep increases in electricity and gas costs under a carbon tax. Universities say the tax could add millions to electricity bills across the nation. Bond University student Michael Dwyer reports.

Australian universities are preparing for steep increases in electricity and gas costs under a carbon tax. Universities say the tax could add millions to electricity bills across the nation.

Victoria’s Monash University is predicting an increase of close to 20% per annum — around $2.1 million — and says it could impact on wage increases, tuition fees and research infrastructure.

The tax will see about 500 of Australia’s highest energy using organisations and businesses that emit an amount of greenhouse gases equivalent to 25,000 tonnes or more of carbon dioxide taxed per tonne of carbon.

The scheme will directly tax “scope one” emissions, which are the release of greenhouse gases as a direct result of activity/activities such as the process of manufacturing, transportation of materials and products, and fugitive emissions. 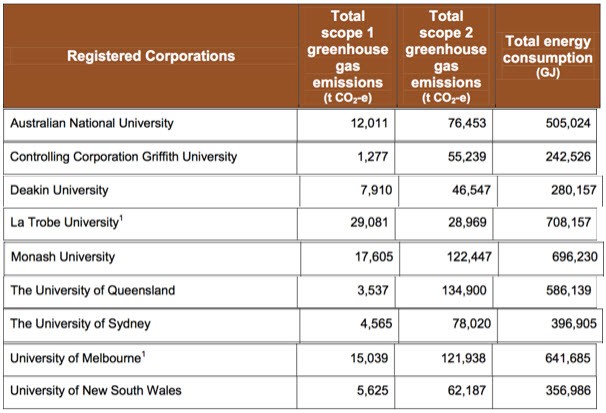 Only La Trobe University appears over the 25,000-tonne scope one threshold. However, the other eight universities along with additional Australian universities will be indirectly impacted due to scope 2 emissions (using energy such as electricity, heating and cooling). 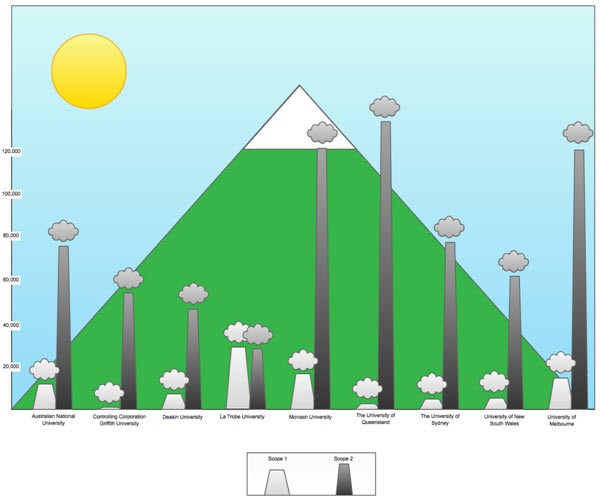 Scope one and two emissions from Australia’s highest-emitting universities

The high energy use of universities is largely a result of campus size, building design and technological infrastructure.

Building energy usage is the largest contributor to Monash University’s carbon footprint. Across the six campuses around Victoria, it maintains approximately 200 buildings. Many of these buildings are over 30 years old and are not energy efficient.

Its Clayton data centre is its largest contributor, consuming over 4% of the entire university’s electricity. As a result, Monash has outsourced its second data centre in “sustainability collaboration” with the University of Melbourne and RMIT.

Monash estimates its electricity usage to be around 70% of its carbon footprint, with gas at 10% and air travel around 15%. Other contributors are small, such as fuel and waste to landfill. In regard to its carbon footprint, Monash does not include emissions from staff and students commuting to and from campus due to the complexity of measuring this output accurately.

The table below shows the amount that other universities across the nation may be up for based on Monash’s estimated cost impact of 20% (around $2.1 million) compared with the Scope 2 figures from the NGER report.

Although the age of many campuses poses a significant difficulty in making them more energy efficient, sustainable campuses have become a major priority for universities. The University of Melbourne has set up an environmental sustainability plan targeting carbon neutrality by 2030. From the base line year of 2006, it has achieved reductions in energy usage, net energy related carbon emissions and water usage.

The Australian National University has established an environmental management plan 2009-2015 that has targets of reducing energy use, total water use and material waste to landfill. ANU also introduced biodiversity plans, animal monitoring surveys and internships on university environmental sustainability projects.

The University of Queensland has the largest flat-panel photovoltaic solar power system in the country. According to the university’s solar energy site the 1.22 megawatt system will save around 1750 tonnes of greenhouse gas emissions per annum and provide approximately 6% of electricity at the UQ St. Lucia campus.

Monash University has a carbon reduction strategy targeting aggressive activity between now and 2020 and is now considering and costing an adequate reduction time and timeframe.

The implementation of the carbon tax may go further than impacting on their bottom line — it could impact on the way they teach. With the tax potentially impacting the university’s capacity to provide research infrastructure, Monash is re-examining the potential of online education to offset this.

Online learning could save carbon emissions caused by commuting but greater demand on the university’s IT infrastructure must be considered and the flow-on effects would create a need to extend data centres.

Nice effort, Michael, but your report is missing some key context. For a large university, the sums you are presenting are small change.

I’ll pick Monash as a convenient example (it’s also my employer – I’m speaking for me only). From the 2011 annual report, Monash’s total operating expenses for 2011 were 1.490 billion dollars.

As such, while universities can and should improve the energy efficiency of their operations, even if they do not the carbon price is all but immaterial to their bottom line.

Amazing that these costs have not been anticipated and planned for by business and organizations ahead of time. It’s not like this is a surprise – there has been a mass of publicity and information about carbon pricing. My experience is that most large businesses in energy and financial services have been working hard on implementing changes in this area for some time. Those organizations squealing about this now simply demonstrate their inability to plan and manage a clearly articulated regulatory change.

Then again I guess we are talking about Australian universities which are famous for their forward thinking strategic planning and managerial excellence!

I logged on to write the same comment as Robert Merkel’s. I would add that Monash representative Stacey Mair’s claim that ‘Increased energy costs will constrain the university’s capacity to fund wage increases in future’ is rubbish: who does she think she can fool with that nonsense?

Australian universities have been cutting their carbon footprint for years, in the University of Melbourne’s case, since 1979.

Emissions trading, carbon credits, money, employment, reality, history.
Please get a grip on these issues and leave the tax tripe alone, the fixation
is becoming decidedly unhealthy. Ameliorate your tax bill with carbon
credits and spare us all these carbon cretins!