In today's Media Briefs: typo of the day ... Front Page of the Day ... Jeremy Paxman says Piers Morgan told him how to hack a phone ... Police probe complaint against Courier-Mail and more ...

Never wrong for long. One of the best things about online journalism is that you can update mistakes quickly. But that doesn’t mean they go unnoticed. 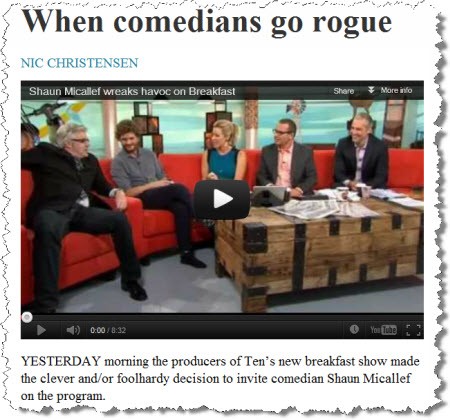 The video had been making the rounds of Twitter yesterday afternoon. Except, Micallef didn’t appear on Breakfast yesterday. As the YouTube video clearly noted, it was uploaded on March 18. One Shaun Micallef blog posted the video on March 15, saying that Micallef had appeared “the other week”.

Obviously someone finally told Christensen and the post was updated (although no mention in the article that it was changed): 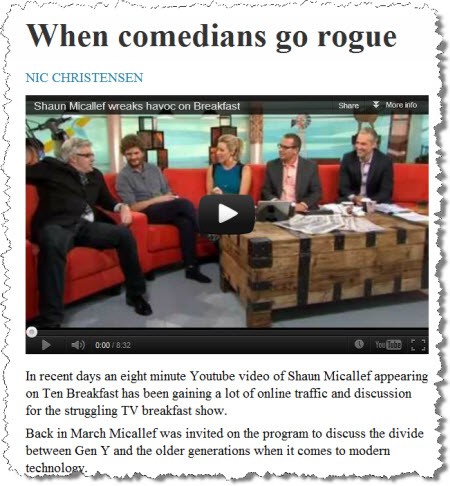 Not quite as catchy a lede, is it?

How to (sometimes) write a review. Ah, The Guardian, perhaps the single most irritating newspaper on the planet. But when it goes, it really goes. Take Jonathan Jones’ review of Damien “shark in a tank” Hirst’s new exhibition of figurative oil paintings, “Two Weeks One Summer”. Awarding the show one star, and denouncing it for basic technical incompetence, Jones, an admirer of Hirst’s conceptual works, breaks off at one point and simply starts addressing Hirst personally:

“Seriously — Mr Hirst — I am talking to you. It seems you have no one around you to say this: stop, now. Shut up the shed.”

Later, he rises to magnificence:

“If Hirst did not try to paint an orange accurately, no one would know he can’t do it. But he has tried, at least I think it’s an orange, and the poor sphere seems to float in mid air because of the clumsy circle of shadow below it. For a moment I thought this was intentional, then I realised it was a competence issue. Such issues abound. You look at a branch and it is obvious he has worked at it: equally obvious the work was wasted. At their very best these paintings lack the skill of thousands of amateur artists who paint at weekends all over Britain — and yet he can hire fools to compare him with Caravaggio.”

And then the coup de grace:

“This exhibition is a warning to young artists. At 18, you may long to be Damien Hirst when he was 30. But in his 40s, Hirst apparently wishes he was the artist that, who knows, he might have been, had he spent his youth drawing day after day after day. He has left it too late. Instead he looks like a tyrant lost in a world of mirrors …”

A neat end, since he had earlier compared the exhibition to a recent vanity showing by Saif al-Gaddafi, of his own desert landscapes. Given Hirst’s obvious middle-aged desire to create something which combines ideas with striking physical rendering — or art as we used to call it — Jones’s review will be devastating. And really, at some point, reviewers should simply break off from any pretence at giving a “report for readers” in the review, and say what they are really doing: telling the artists what a tool he is. Five stars. — Guy Rundle

Typo of the day. Saturday’s May 19 edition of Connecticut newspaper The Register Citizen carried a most unfortunate typo in its headline for a story on the NBA playoffs … (via Deadspin) 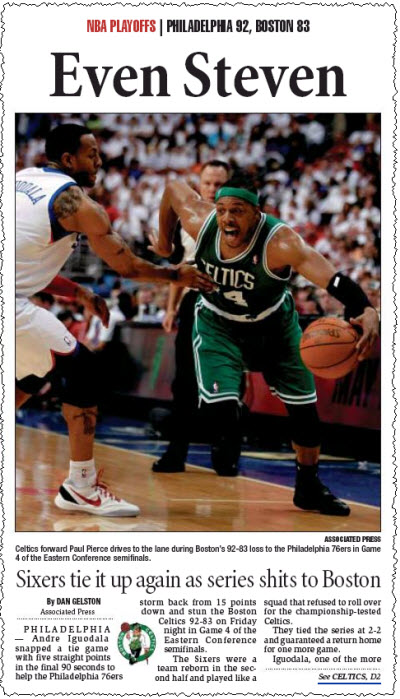 Front page of the day. The international business newspaper the Financial Times leads today with the news of the ever-increasing likelihood of Greece’s withdrawal from the eurozone … 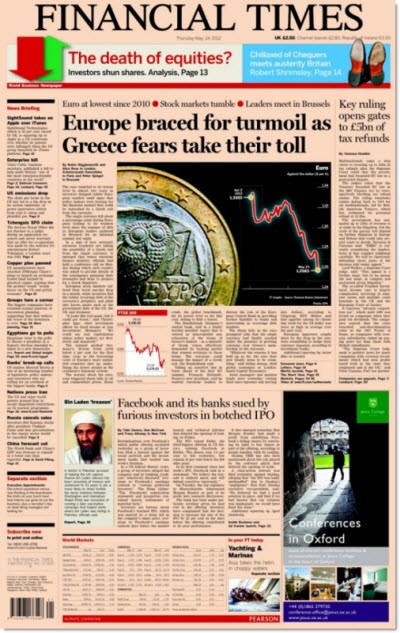 Paxman says Morgan told him how to hack a phone

“Piers Morgan described to Jeremy Paxman how to hack into a mobile phone at a lunch held at the headquarters of the Daily Mirror publisher, the BBC presenter has told the Leveson inquiry.” — The Guardian

“Federal police are evaluating a judicial complaint against The Courier-Mail after the newspaper allegedly breached federal law by identifying a family at the centre of an international child abduction case.” — The Australian

“Federal MP Craig Thomson claims A Current Affair has paid a Sydney escort to detail how he was a client, describing it as ‘grubby’ chequebook journalism.” — TV Tonight

“The Age newspaper refused to co-operate with a parliamentary inquiry into allegations a Labor Party database had been hacked. A police inquiry into the allegations was expected to finish next month. In a report tabled in State Parliament today, the committee has branded the newspaper’s response as ‘offensive’.” — Herald Sun

How to watch Egypt’s election via social media

“It’s a historic day in Egyptian history: voters are headed to the polls to vote for the country’s first president since the ousting of Hosnai Mubarak, who ruled the country from 1981 until last year during the height of the Arab Spring protests against despots across the Middle East.” — Mashable

Do you know that the crucifiction of Craig Thomson over nothing at all has reached such a point that in his place I would raise a machine gun.

re the D Hirst review (which was truely worth the read) one commenter posted this link:
http://www.3ammagazine.com/3am/stuck-inn-xi-the-art-damien-hirst-stole/

Breathtaking that he has been allowed to get away with such blatent plagiary for so long, and with such contempt for the artists he ripped off! My daughter is currently doing art in her HSC and has to sign all these documents declaring that her artwork is hers, but also acknowledging any help, assistance or inspiration from existing artworks. I reckon by those standards DH would fail HSC art!

Shaun appeared on Breakfast on the 29th of February, and the appearance was made available to the Internet the next day. It’s nice to see it getting some attention.