Australia's leading helicopter traffic report network has been accused of ageism in a swingeing statement of claim lodged in the NSW Administrative Decisions Tribunal.

Australia’s leading helicopter traffic report network has been accused of ageism in a explosive statement of claim lodged in the NSW Administrative Decisions Tribunal.

Jason Bouman — a 40-year-old TV traffic reporter for the network who featured on Channel Nine’s Today show for 18 months before his resignation in March last year — alleges he was taken off TV and shunted to radio because his Australian boss, Bill Pezzimenti, wanted a “good looking young blonde” in front of the camera.

The statement of claim (with a 35-point summary), lodged in March and obtained by Crikey, lists Pezzimenti and the Australian Traffic Network as respondents alongside operations manager Steve Woods. 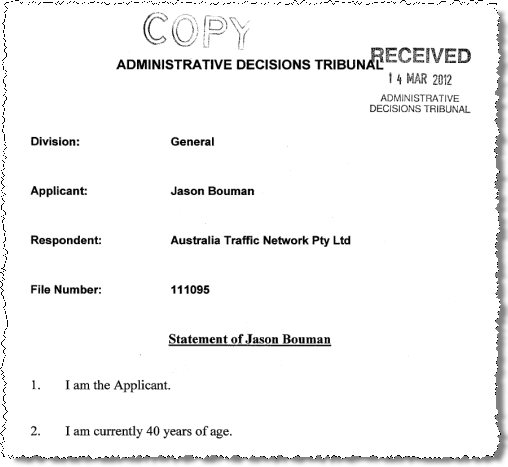 Bouman is demanding reinstatement and the payment of lost wages under the NSW Anti-Discrimination Act. In the event that the firm refuses to re-hire him, the voice-over specialist is suing ATN for $50,000 and continuing payments of $1000, plus an additional $30,000 for hurt and humiliation caused by the episode. He is also demanding a public apology and discrimination training for ATN staff.

In March 2011, despite months of re-assurance from management that he was not being targeted, Bouman was replaced in the chopper by attractive 24-year-old Amelia Oberhardt, from Brisbane, and offered a grab-bag of low-profile radio roles instead. According to the claim:

Included in the statement of claim is an email sent by Pezzimenti to Woods and national operations manager Jay Flood in December 2010. It read:

The statement details a long period of positive feedback for the one-time Mix 106 host from his immediate superiors.

On June 9, 2010, Flood wrote that there were “no plans for any change mate — your [sic] doing a great job on radio and TV!”. But by November the scuttlebutt around the office was that he was about to be boned.

“Mate, I have a bad feeling,” spiky-haired Channel 7 ATN reporter Duane Strauss allegedly told Bouman in the chopper. “I think they’re going to flick you. You need to watch your back … I think they want to put a hot young blonde in here and they’re grooming her.”

Then, in a meeting on February 15, Woods explained to Bouman that Pezzzimenti “sees the role for someone younger, and more cool looking like Duane. Bill thinks your next move is 2UE because of your older sound, Jase.” He was later offered a job doing 2UE alongside other slots on Classic Rock and New FM.

After a meeting where the move was explained, Bouman was incredulous: “I’m gone in six weeks. They’re putting some young girl from Brisbane on. What, have I got a head like a dropped f-cken’ pie?”

On March 17, Brian “Sando” Sanders from Southern Cross Austereo had breakfast with Bouman. Sanders told Bouman he had been shown a text message Woods had allegedly received from Pezzimenti that read: “Tell me, what are you doing about getting that f-cking fat old c-nt off Channel 9?”

Bouman says he “suffered intense emotional pain, hurt and trauma from the discriminatory behaviour of the Australian Traffic Network and its management team”. He says he was under the care of a clinical psychologist following the alleged discrimination.

The day after his final shift on Channel 9, a curious gossip item appeared in The Sydney Morning Herald penned by Andrew Hornery. Woods allegedly accused Bouman of leaking it to Hornery, which Bouman strongly denied. This was not the first time a helicopter traffic reporter had been criticised for their appearance. Hornery noted that in 2006, Alf Paranihi was told by ATN management he was too heavy to fly and went on a crash diet to stay in the skies.

Neither Pezzimenti nor Flood responded to Crikey‘s request for comment this morning. However, in a letter included in the statement of claim and dated June last year, global boss Gary Worobow said that an internal “investigation to date has found no evidence of discrimination and the company does not believe it has any liability arising from your complaint”.

ATN is a subsidiary of global New York-based behemoth the Global Traffic Network, which was sold to private equity company Gridlock last September. It provides traffic reports for 70 commercial radio networks and the ABC in addition to TV spots on all three commercial networks. On the commercial stations it does lucrative side-deals with advertisers to plug their brands on air.

The case is expected to come before the tribunal in October.

Has reality finally caught up with the driverless car hype?

Novel fixes for Australian cities to navigate out of traffic congestion

Gosh, no wonder the media demand such high standrads of workplace behaviour for everyone else.

Of all the vast numbers of competent journalists in Australia, it does seem that that the ones who end up on television are those who look good. The organisers must have a pretty low opinion of what we value in a journalist. Surely we want a communicator to be good at communicating?

We don’t want them to look good; we want them to sound good. Yet these organisers keep on giving us pretty people with shockingly ugly British accents. Where are they coming from — or should I ask!

I reckon we ought to bring back the dictation test for these people. Put each of these job applicants in front of a group of freshly arrived Asian migrants, to whom they are to give a dictation test. If these 2EL migrants can’t understand what he/she is saying, then we should throw the Pom out of the country.

How about we toss all Pom-haters called Roger out of a moving helicopter? Then we could make a film about it called “Who killed Roger Racist?”

Seems the spirit of the late, grating John “f*ckability” Westacott lives on.

Give me Laurie Oakes any day over some of these other pretty twits, Roger Clifton.

Execs in media all need to be drawn and quartered, because their ‘demographics’ (i.e. 18-youngish…40?) barely even watch the effing news.