Glass houses at The Oz over the NBN. The Australian was throwing more stones at the NBN this morning, with the dynamic duo of Annabel Hepworth and Mitchell Bingemann (see their outstanding previous efforts) on the attack over “82%” of NBN contracts going to foreign companies.

That would be The Oz owned by News Corporation, an American company controlled by Rupert Murdoch and his friends from Saudi Arabia via a tiered share structure that maintains the American’s control despite his limited shareholding. That would be the News Corp that controls 75% of metropolitan newspaper circulation in Australia. But News Corp’s newspapers aren’t taxpayer-funded, you might object — except they are; News Ltd depends heavily on the tens of millions of dollars it receives from state and federal governments every year for classified advertising and every election year by way of taxpayer-funded election advertising.

It’s a peculiar form of xenophobia when it’s promoted by foreigners. — Bernard Keane

Great Gatsby goof-up: billboard-sized Baz booboo. When news broke that divisive Australian filmmaker Baz “Moulin Rouge!” Luhrmann was about to direct a new big screen 3D adaptation of The Great Gatsby, admirers of F Scott Fitzgerald’s seminal book — set during the roaring ’20s and credited by many as the Great American Novel — had every reason to be concerned.

Luhrmann’s previous feature was the $130 million outback epic Australia, a blockbuster buffet of simmering set pieces, cheesy dialogue and cookie-cutter characters. His next project: one of the most highly regarded literary works of the 20th century, starring Leonardo DiCaprio, Tobey Maguire, Carey Mulligan and Isla “Home and Away” Fisher.

The film’s highly anticipated trailer premiered this morning to much online fanfare, but a production booboo has cast early doubt on Luhrmann’s literary nous. One shot 13 seconds into the trailer, of a bustling early ’20s New York City, depicts a large billboard advertising the legendary Ziegfeld Follies, a series of broadway productions that ran from 1907 to 1931. However Luhrmann’s team, evidently not across the Ziegfeld legend, misspelt the title of the famous revues as “Zeigfeld Follies”.

This memo, courtesy of Crikey, is to the production crew, who are presumably about to re-enter the editing suite and fix the typo ahead of the film’s January 2013 release: the “i” comes before the “e”. — Luke Buckmaster of Crikey blog Cinetology

A front-page ad about yourself. Are you interested in moving somewhere exotic? Keen to make some friends and perhaps meet someone special? Looking for employment opportunities and accommodation in this new land? How would you go about it? Perhaps take note of the work of American teacher Dan Feltenberger, who last week took out a quarter-page ad on the front page of The Bali Times: 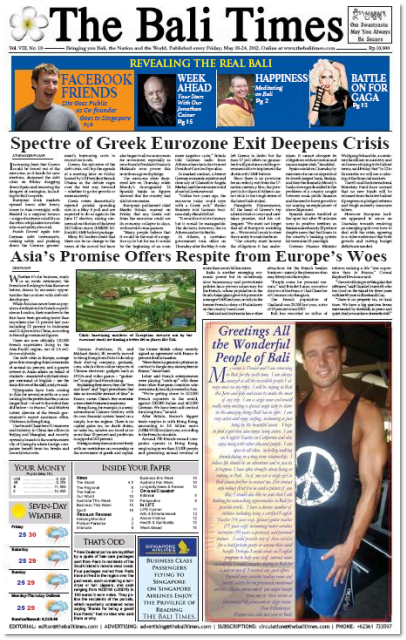 “Greetings all the wonderful people of Bali,” headlines Dan’s innovative ad, which goes on to announce: “I will be staying in Bali this June and July and want to make the most of my trip. I am a single man and would really enjoy meeting a special single lady to share in the amazing things Bali has to offer.”

Crikey sent an email to Dan this morning to find out if his unorthodox approach to finding love in tropical Bali yielded any results, but we hadn’t heard back from him before deadline. — Leigh Josey

Front page of the day. There’s probably only one thing that could get tonight’s opening State of Origin NRL game off the front page of the Gold Coast Bulletin and that’s news that local girl Schapelle Corby might be getting out of prison in Indonesia … 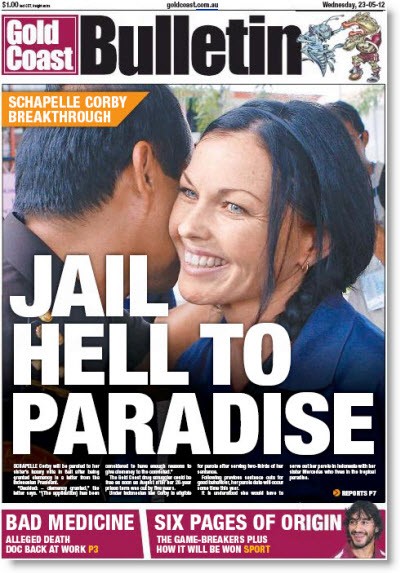 “The News of the World journalist Mazher Mahmood commissioned surveillance on his paper’s chief phone-hacking critic, the Labour MP Tom Watson, in the hope of finding him having an affair, according to email evidence Watson has obtained.” — The Guardian

“Two Democratic consultants who claim they supplied Arianna Huffington and Ken Lerer with the idea for the Huffington Post have filed an amended version of their lawsuit, saying emails and other documents they obtained through discovery show how the defendants appropriated the concept and attempted to cover their tracks.” — Forbes

Why misspelled names are so common

“News organizations frequently run corrections for misspelled names, and some have misspelled the same name dozens of times. Last week, the Los Angeles Times ran a correction after misspelling Gould’s name in a caption. That was the 47th time since 1985 that the Times has referred to the actor as ‘Elliot’ instead of ‘Elliott.'” — Poynter

“Reuters Alistair Barr is reporting that Facebook’s lead underwriters Morgan Stanley, JP Morgan, and Goldman Sachs, all cut their earnings forecasts for the company in the middle of the IPO roadshow.” — Business Insider

Six journos killed in Mexico in under a month

“The sixth current or former Mexican journalist to be killed in less than a month has been buried amid demands for a justice most doubt will ever come.” — The Los Angeles Times

“But News Corp’s newspapers aren’t taxpayer-funded, you might object — except they are; News Ltd depends heavily on the tens of millions of dollars it receives from state and federal governments every year for classified advertising ”

very long bow on the tax payer funding Bernard, even for a journalist with an almost demonic hatred of News…they’re paid for ads …not government largesse…something that I assume Crikey would willingly accept if only Crikey had audience numbers that anyone wanted to reach…