Lack of security a worry as Egyptians head to polls

A field of 12 candidates are on show as 50 million Egyptians head to the polls to vote for the country’s first-ever civilian president, writes Vickie Smiles from the Egyptian city of Alexandria.

Two Islamists, two felool and a leftie are leading a field of 12 candidates as 50 million Egyptians head to the polls from 8am today to vote for the country’s first-ever civilian president (little-known lawyer and former cop Mohamed Fawzy Issa withdrew last week and pledged support for Amr Moussa).

Rabab el-Mahdi, 37, is the other well-known leftist in the campaign but she’s Fotouh’s political adviser, not a candidate. Her appointment, after she gave up a teaching post at Yale, speaks volumes about Fotouh’s campaign of inclusion in trying to appeal to everyone and diffuse the Islamist tag.

Voting continues from 8am to 8pm tomorrow with the result announced late Saturday. If none of the candidates wins more than 50% there will be a run-off on June 16-17 between the two leading candidates.

The field has changed since Moussa went up against Fotouh, in the one and only televised presidential debate on May 11. Both led the polls then but now it’s less clear, with new surveys plus voting results of Egyptians living abroad giving comfort to each of the top five, especially Sabahi, whose popularity, especially with young protesters, has recently gathered momentum.

Morsi has also gained ground, even overtaking Fotouh in one of the many local polls. His expatriate support has been strong in the region, although Fotouh beat him in Qatar.

For the past week Morsi’s supporters have been driving little trucks overburdened with his image up and down Alexandria’s famous Corniche, blasting music and slogans beyond hearing level. In another gimmick, his team attempted to make the Guinness Book of World Records by creating the longest human chain in the world, 760 kilometres from Aswan to Alexandria. Success has yet to be confirmed. Great publicity, even the trucks! 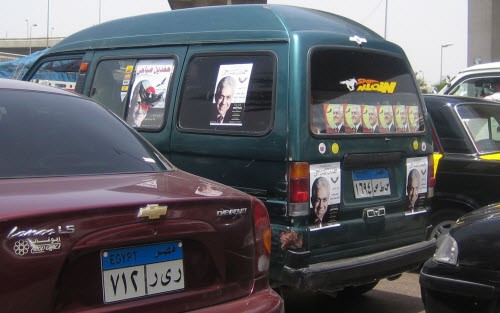 “That’s one of Sabahi’s trucks,” yelled my taxi driver, Gamal, yesterday as we sat for an hour in Alexandria’s relentless traffic. Campaigning ended Sunday night so the truck looked destined for repair rather than show time. “He might have won if the election had been next month,” said Gamal. “But then he doesn’t have the money of the felool or Islamists!”

None of the candidates had really appealed to the revolutionaries until Sabahi started gaining traction, but it may be a question of too little too late.

Amr Moussa is definitely a felool for people like Gamal: felool meaning leftovers from the former regime like, Ahmed Shafiq, who has also been gaining in popularity. In a send-up of felool starring Moussa and Shafiq, this video says that anyone who fails to speak out against the crimes of the military deserves nothing. 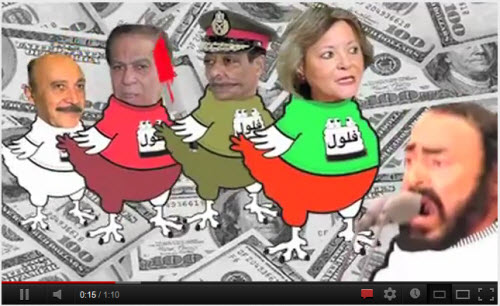 “Moussa is not so bad but Mubarak’s men will support Shafiq now and Shafiq will support Mubarak tomorrow,” said Gamal.

Fear about lack of security seems to be influencing how certain voters approach the election. They want a tough president and most of the candidates are playing up to this with constant talk about restoring security. Shafiq insists he will do it in 24 hours.

Moussa says his first priority “will be to restore security and thus end the fear facing Egyptian families today”. “To do that, we will need to invite the police force back and rehabilitate police stations so that the force could resume its role with a clear mandate from the president to serve the population, not to suppress or oppress it. All police officers who have either quit or are staying home would be recalled back into service,” he told Voice of America in an interview published this week.

No attempt has been made to push for reform or restore the police and security forces before now, either under military guidance or via the new Islamist-dominated parliament elected last November. But it’s suddenly top of the to-do list. That most of the 841 people who died during last year’s January 25 revolution were killed by security services and police also seems to be a point of disconnect for some voters.

“I’m voting for Shafiq,” said Magda, a manager in downtown Alexandria. “He’s strong and knows how to restore security.” Magda is a Coptic Christian so part of her choice would be to vote for a non-Islamist candidate, but the security issue is uppermost in her mind.

The country’s military rulers, led by de facto president, Field Marshal Mohamed Hussein Tantawi, have fanned the flames of fear by regularly referring to problems with security and justifying their harsh treatment of protesters in terms of protecting Egypt. Less than three weeks ago, 11 protesters were killed and more than 350, including 16 women and 10 children, were arrested after street clashes outside the Ministry of Defence in the Abbasiya district of Cairo.

The few already released have alleged torture and abuse at the hands of the military but no one has been held accountable for any of the deaths, injuries or torture either during or since the revolution.

Tantawi was banging the security drum again last Wednesday by saying the military had a “duty” to protect Egypt from domestic disturbances and defend it against foreign threats.

Egyptians have more to worry about in the military’s supremacy and how the yet-to-be-written constitution deals with the separation of powers but for two days (or four if there is a run-off) they can bask in the historical occasion and hope for a fairer future.