It’s all about Craig Thomson…

MP Craig Thomson has reached new heights in our weekly charts and, according to some political commentators, new heights in his ability to blame others for his troubles. Indeed the crescendo of media coverage when he invoked parliamentary privilege to present his case at midday on Monday accounts for one of the biggest news spikes this year.

Certainly the Thomson issue has, with help from opposition members fanning the flames, meant a lack of substantial coverage on many budget reforms passing through the house along with a string of policy announcements, some of them noteworthy.

Other movers and shakers this week include Tasmanian Premier and Treasurer Lara Giddings for returning a net debt budget in the Apple Isle, and Bill Heffernan, the Liberal MP anointed as Labor’s reciprocal example of MPs behaving badly. And to think we bemoan the public’s cynicism. 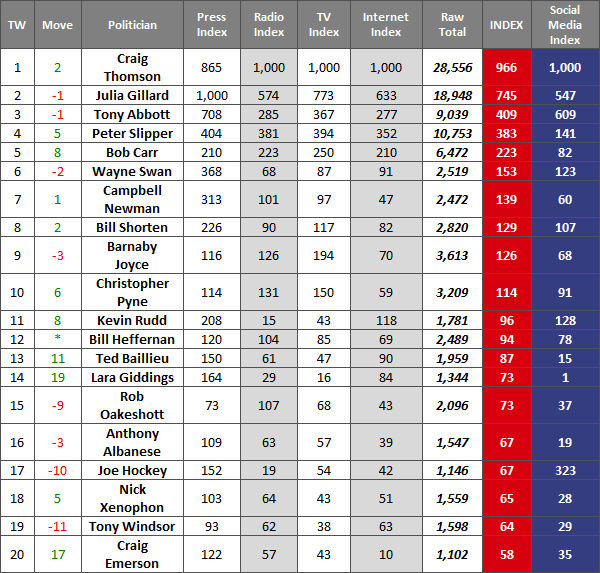 Penny Wong’s response on Q&A when asked if Joe Hockey’s view on same-sex marriage hurt her feelings sparked many a social media discussion this week.