From the Crikey grapevine, the latest tips and rumours … MP doesn’t like your email? Wait ’til he contacts the boss. A constituent who contacted federal Liberal MP Patrick Secker in support of gay marriage was in for a surprise when Secker then apparently forwarded the email on to the constituent’s boss. The person in question used […]

MP doesn’t like your email? Wait ’til he contacts the boss. A constituent who contacted federal Liberal MP Patrick Secker in support of gay marriage was in for a surprise when Secker then apparently forwarded the email on to the constituent’s boss. The person in question used their work email address, from a vehicle trader/auto repair company, to lobby the opposition whip over his “outdated and quite ignorant” opposition to gay marriage …

Morning Mr Secker,
So it seems here we are again? And it’s been only a few short months since we first spoke of the ongoing issue of same sex marriage. Our response even within the SE has been fantastic as you would know I am sure you read the paper and listen to the radio (incase you didn’t I attached the links to some local articles that may be of interest)
http://www.borderwatch.com.au/news/local/news/general/petition-calls-for-gay-marriage-rights/2450337.aspx?page=1
http://www.abc.net.au/local/stories/2012/02/17/3433166.htm

Our local poll I must say has had a fantastic result: 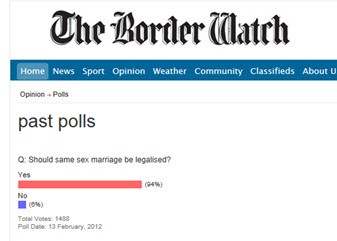 Now Mr Secker, with regards to your current views! I find them out-dated and quite ignorant. Considering it was the people that voted you into this position I find it disgusting that you would stand for your own personal opinion rather than the actual beliefs of your followers. It is a great injustice that you would choose to follow your own view outside of the greater communities. We live in a democratic society not a dictatorship Mr Secker, and for protection of your position you might find a growth in your view to become more open a huge advantage especially considering your current position in the poll. Marriage Equality is what we want and we want it now!

Crikey was informed by Secker’s office that he would not be commenting on whether the email was genuine and, if so, why he sent it.

TV automation spelt trouble for ABC. We’ve been asking for the real story on life as an ABC employee, after Aunty nabbed an award for being a top work/life balance workplace last week. Someone else under Aunty’s wing is calling for a little R-E-S-P-E-C-T:

“The place is great in giving people space when things in their life go REALLY wrong, but many of those kind of things are work related anyway. Workplace changes are barely managed and those who raise questions are ignored, dismissed or condemned.

“The move to automation on TV news is the perfect example. Many of us felt we were left to fend for ourselves as the quality of our shows collapsed around our ears and we struggled to avoid black and colour bars. We raised questions, demanded actions and were left on the side of the road. It was only when the board had enough of nightly on-air stuff-ups that anything happened. Nice to be respected … by the way that’s one of the four ABC values.”

Another staffer won’t hear a word against the broadcaster. They write:

“Why do you have it in for the ABC? I work at the ABC and I love it. I am able to work part-time and leave to pick up kids when I need to, and I still get interesting work even though I am a mum. It is a supportive workplace and an amazing place to work. All of the people I work with work really hard to keep the ABC going, everyone could be better paid in the private sector but they have chosen to work here because they believe in public broadcasting. I love being an ABC employee!”

We’ve got nothing against the ABC, for the record. We just asked the question what people thought of the place. Got more Aunty goss? Drop us a line or send your tip anonymously.

Still counting the Bitcoins at ABC. Still at Aunty, remember the “serious misconduct case” being investigated into a staffer’s use of ABC systems to run online-only currency system Bitcoin? The person responsible still works at the broadcaster, we’re told, and there’s much more to the story. We’ll ask questions …

Groceries going cheap at Woolies. From the 3AW Rumour File: “Caller Thanks Woolies says Woolworths had a meltdown with its self-serve checkouts yesterday. He says if you scanned your reward card, you would get $5 from it. He says a woman who bought about $50 worth of groceries got it for $1.69.” Oops! Any Crikey readers experience this?

If Secker passed on a private email to an employer surely that is a breach of privacy.
What a low act if the claims are true. The Liberals really need to get a handle on their anti-gay stance and start treating people equally with respect and dignity.

I had a similar experience with Wilson Tuckey, the renowed redneck, who did not like my crtical questioning his alternative energy policy (which was a farce).

He, or his office, forwarded my email to my Managing Director and I had to face an internal investigation into what I had said. As I had said nothing wrong there as no consequences but it was a rather underhanded and nasty response. Perhaps it is just a Liberal Party policy.

Yesterday as I made my way through your local parish, one of your peasants offended me. As a Person of Quality I’m sure you understand my affront, and will take appropriate action to ensure it doesn’t recur. Perhaps a sound flogging, or a day or so in the stocks? I will leave it to your renowned good judgement and will remain,

Perhaps when sending emails of a personal nature, send them from a personal email address and not the work one?

Still processing this: …”I still get interesting work even though I am a Mum…” .