id the absurd idea to have Pauline Hanson track down passport forgers and other naughty people in Asia on Today Tonight cost the program tens of thousands of viewers? From the ratings, the answer is yes. Plus other media news.

Did guest reporter Hanson cost TT viewers? Did the absurd idea to have Pauline Hanson track down passport forgers and other naughty people in Asia on Today Tonight cost the program tens of thousands of viewers? From the ratings, the answer is yes. 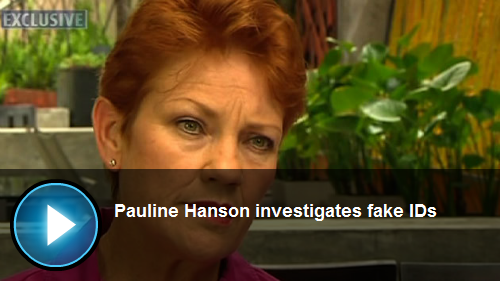 Usually, Today Tonight finishes on top of A Current Affair in the total viewers because of big audiences in Perth and Adelaide. The margins in Perth and Adelaide were still big, but nowhere as large as they have been. A Current Affair beat Today Tonight in Sydney by 45,000 and 57,000 in Melbourne. Seven promoted the Hanson story all weekend, so viewers knew what was coming and tuned out. — Glenn Dyer

AFR‘s poor sport. No correction or clarification in this morning’s Australian Financial Review of an egregious error the paper carried in yesterday’s paper on page 50 in its Sports Review? The opening paragraph of the Monday’s AFR report on Wednesday’s state-of-origin game in Melbourne started “Brisbane’s Etihad Stadium is poised to host a sell-out crowd of 52,000 when Queensland and NSW do battle in the first 2012 State of Origin Fixture this Wednesday”.

And a summary of key points said “The 2012 State of Origin series kicks off in Brisbane this week.” Really. I thought the first game is being played in Melbourne at Etihad at Docklands. Does anyone at the AFR really follow sport? Did anyone at the paper yesterday spot the error? — Glenn Dyer

Front page of the day. “WE DON’T BELIEVE YOU” screams the front page of today’s Herald Sun directed at embattled Labor MP Craig Thomson. The masterpiece though is the Pinocchio nose. 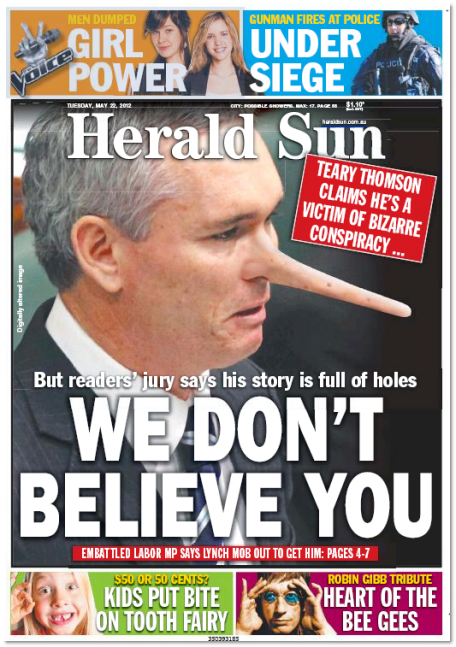 “Rupert Murdoch has denied reports that News Corp is considering spinning off its British newspapers to protect the rest of his media empire from a phone-hacking scandal.” — Reuters

“A research project led by the University of Central Lancashire is creating what it believes to be the first internet-enabled newspaper. The project, called Interactive Newsprint, plans to create a printed publication using a type of ‘smart’ paper that responds to the human touch.” — journalism.co.uk

“Several journalists were arrested and injured while covering the protests against the NATO summit in Chicago on Saturday and Sunday. As thousands of anti-NATO protesters met thousands of police officers in the streets, photographers found themselves repeated targets of the CPD.” — Huffington Post

“YouTube has seen its video uploads grow 50 percent over the last year: Users are now uploading 72 hours of video every minute, compared to 48 hours just a year ago. ” — GigaOM

Google+ a ghost town as brands decamp for Pinterest

“Google+ launched brand pages six months ago, introducing new social lingo, including ‘hangouts,’ ‘circles’ and ‘+1s.’ But strike up a conversation with a digital marketer these days, and talk of ‘+1s’ has been replaced by that of ‘pins.'” — AdAge

So according to the HUN Mr Thomson is no longer suspended from the Labor Party?

Thomson should not have been suspended from the ALP, that is just another worthless choice by the time wasters and losers like Richo who are relevance deprived.

You can just imagine the producer of TT mulling over who to send on that trip:

“Now, who do we have on our low-rent, low IQ books who’s a r*acist ratbag and a media whore?”