It is difficult to think of what the government can do to get people interested in something other than the sideshows of politics. E

The disappearing budget. Well the budget inspired debate about economic policy did not last for long and it is unlikely to be resurrected either. Craig Thomson’s address to the House of Representatives has seen to that and when the tumult and shouting he has inspired has passed there will always be Peter Slipper to take centre stage.

It is difficult to think of what the government can do to get people interested in something other than the sideshows of politics. Except, perhaps, to first change its leader.

And that’s something the market clearly thinks will happen. 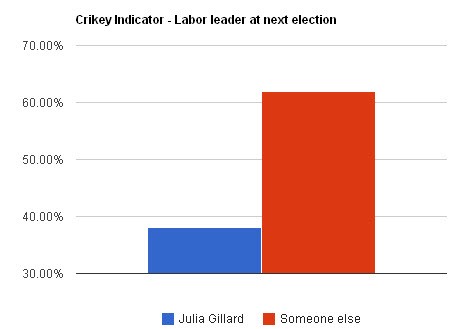 The conflicting vox pops. Getting a verdict from the good voters of Dobell was irresistible to the television news bulletins last night. I watched three of them and noted that SBS and Channel Nine found a majority of the bingo players giving their local member’s performance the thumbs down. The ABC’s three club goers were much more forgiving with not a Craig Thomson critic in view.

Make of that what you will.

Keeping it in the family. With the Eurovision contest almost upon us from Azerbaijan, a little update on the politics of song. The head of the contest’s organising committee is the president of Azerbaijan’s wife and the host country’s entrant is the president’s son-in-law.

Keeping zombie banks alive. It’s going to be an interesting election campaign in Greece with keeping insolvent banks alive one of the highlights. Der Spiegel reports that most Greek banks are currently cut off from the usual ECB lines of credit. They no longer have sufficient collateral. A number of banks are even currently operating without sufficient capital as a risk buffer for their activities.

“These zombie banks are being kept alive with help from the so-called Emergency Liquidity Assistance (ELA) — a rescue aid program managed by [the head of Greece’s central bank, George] Provopoulos.”

The European Central Bank, which is providing the emergency funds is described as being “caught in a moral conflict”. Cutting off the flow of money would have disastrous consequences: Greece would quickly run out of money. The population would soon not even have enough cash to pay for its daily purchases.

That would certainly make it an election campaign with a difference.

“In 1998, for China to grow its $1 trillion economy by 10 percent, it had to expand its economic activities by $100 billion and consume only 10 percent of the world’s industrial commodities — the raw materials that include everything from oil to copper and steel. In 2011, to grow its $6 trillion economy that fast, it needed to expand by $600 billion a year and suck in more than 30 percent of global commodity production.”