Stunts and scandal from the $2.3b man

Another day, another Clive Palmer stunt and/or scandal. He's either headed to parliament or the slammer. Perhaps there's no difference.

Another day, another Clive Palmer stunt and/or scandal. He’s either headed to parliament or the slammer. Perhaps there’s no difference.

Seems the loveable billionaire put his foot down in January, clocking 87km/h on one Gold Coast street — 27km/h over the limit. Now he’s putting his foot down on paying the $333 fine. 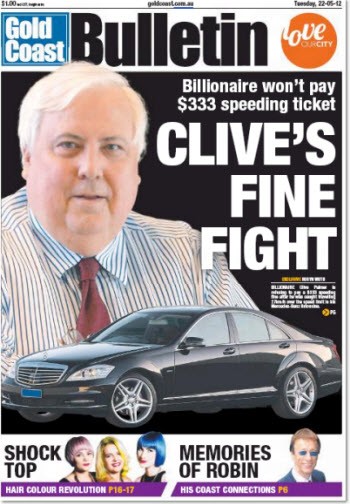 “The State Penalties Enforcement Registry is chasing Mr Palmer, demanding he pay up. Legal sources say he could be jailed if he continued to refuse to pay the fine.

“It is understood Mr Palmer is trying to contest the fine, despite the 28-day appeal period having lapsed.”

Our Clive spends more on lunch than the speeding fine he could have just paid. But his wealth has diminished over the last 12 months. James Thompson from our sister site SmartCompany — and a former BRW Rich List editor — calculates the mining magnate may only be half the man he was, with his estimated worth of $2.3 billion well down on the $5 billion claimed last year. He’s likely to feature in BRW‘s top 10 richest when it’s announced on Thursday.

Still, there’s plenty in the kitty. Enough for a series of billboards in the electorate of Lilley, where he wants to unseat Treasurer Wayne Swan. “Together we can achieve the extraordinary,” a beaming Clive bellows from the garish yellow campaign ads.

With $2.3 billion in the bank, Clive can achieve just about anything.

The ‘stop the boats’ mantra was never about saving lives

Some MP’s think they are above the law, it’s good to note that this jerk already thinks he is, and avoid voting for him. Not that I don’t exceed the speed limit on occasion, but I pay up without any of his cr4p.

I look forward to the day when the daily Crikey doesn’t have a story about either Slipper, Thomson or Palmer. Hello? Anyone there?

Really Ed. I think you could be a bit different to the rest of the Australian press and at least put “allegedly” in front of that (over) estimate of our Clive’s wealth:

[(crikey.com.au/2012/05/02/the-politics-of-clive-palmers-billions/#comment-196648)
MICHAEL R JAMES Posted Wednesday, 2 May 2012 at 4:04 pm | Permalink
“billionaire Clive Palmer, Australia’s fifth richest man’
Maybe, but most likely not.
(theconversation.edu.au/mining-magnate-property-tycoon-politician-just-who-is-clive-palmer-6646)
So Palmer has one income-earning asset (Queensland Nickel, a nickel and cobalt refinery near Townsville that he picked up for a song from BHP Billiton in 2009) and a whole bunch of tenements offering nothing but promises of future wealth. Mineralogy and its subsidiaries reported net losses of $58.5 million in 2008-09, $29 million in 2009-10 and $11.4 million in 2010-11. It received a tax benefit of $874,599 in 2010-11, against revenues of $5.6 million, and paid $136,799 in tax the year before. It is difficult to criticise a company that pays no tax when it earns no real income and most of its costs are incurred by trying (to) prove-up a large resource in a remote area.
These accounts highlight the difficulty of valuing Palmer’s mineral deposits and therefore his personal wealth. Business Review Weekly listed Palmer’s wealth at $5.05 billion, but America’s Forbes magazine rates it at a more modest $US795 million.]

Well he better be railroaded into jail like Marcus Einfeld was.

Fair dinkum does this prattle mean news in this pathetic country.