Over the past week Margaret Simons has been subjected to a sustained attack on her reputation in the pages of The Australian. It's a non story, says Simons.

Margaret Simons: my response to The Oz. Over the past week, I have been subjected to a sustained attack on my reputation in the pages of The Australian. The central allegation against me is that I did not declare a supposed conflict of interest, when I should have. I did not declare it because there was nothing to declare. It’s a non-story, as I have written previously.

Here is what happened. In October last year, before I was on staff at the Centre for Advanced Journalism but after my forthcoming appointment had been announced, I took a call from the Finkelstein inquiry secretariat asking for recommendations of people to conduct research, including on press councils worldwide. They were ringing several people for such recommendations. I was one.

There was nothing unusual about this. I take an average of about four calls a month from government departments, companies and individuals seeking my recommendations of people to conduct research or writing jobs, or in some cases media training.

As the emails released show,  I suggested that this research could be conducted on contract through the centre. Nothing unusual there either. It is commonplace for university academics to conduct research on contract, and indeed the centre did some research (unrelated to these matters) on contract for a state government department  long before I was on staff.

I recommended several names, including that of Dr Denis Muller, who as anyone in the field knows is a leading Australian expert on media standards and regulation. The subject of Muller’s Phd thesis was bang on topic for Finkelstein. He was the obvious person to recommend.

That was the end of my role. Without further consultation with me, the inquiry picked up the suggestion of Muller. After some to-ing and fro-ing with the administrative staff of the centre, about which I was informed but not directly involved, (there was no director in place at the time) the inquiry contracted Muller privately. The centre, and I, had no further role.

Now, if things had been done differently and the research had been done through the centre, I would indeed have been in a position where I would have had to consider whether this disqualified me from commentary on the inquiry and its work. At the very least, it would have been appropriate for me to declare the fact of the contract in my journalism on the Finkelstein inquiry. And I would have added this declaration to the several  others I made in my submission to Finkelstein. But I had no conflict. I had no pecuniary or professional interest. I had nothing to declare. — Margaret Simons (read more on Conversations with the Centre for Advanced Journalism)

Front page of the day. The Scotsman leads today with the death of Abdelbaset Ali al-Megrahi — the infamous “Lockerbie bomber” — who was sentenced to life in prison in 1988 for the bombing of flight Pan Am Flight 103 which killed 270 people, including 11 on the ground in the Scottish town of Lockerbie. Al-Megrahi was released from prison on compassionate grounds after being diagnosed with terminal cancer in 2009. He returned to Tripoli in Libya. 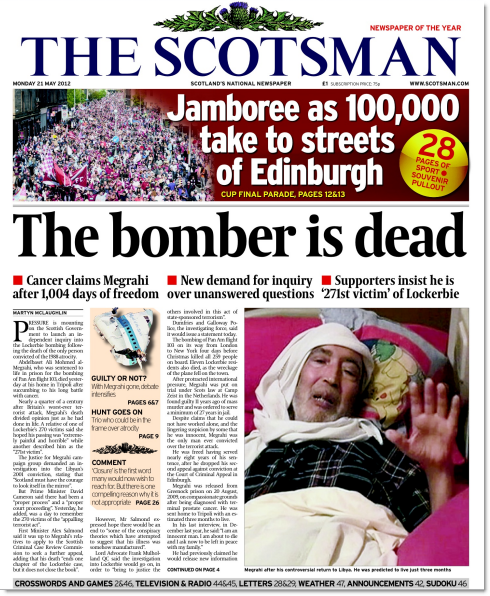 “Former Labor leader Mark Latham has won a finding against the Sunday Telegraph after the newspaper reported he intimidated an elderly swimming teacher.” — mUmBRELLA

“At just 31 years of age Ten’s Hamish Macdonald already has some of his dream jobs in journalism under his belt. A self-confessed ‘news junkie’ now he’s about to front his own late-night show, Ten Newsnight, to air at 10.30pm Monday to Thursday on Ten.” — TV Tonight

“A key former aide to Boris Johnson, the London mayor, has been appointed as head of News International’s communications team to help the beleaguered media company restore its reputation in the wake of the phone-hacking scandal.” — The Guardian

“The tortured body of a Mexican police reporter was found on the side of a road in the northern state of Sonora on Friday, a day after he was kidnapped by gunmen while waiting at a car wash, authorities said.” — Newsday

“What’s most likely to keep journalists awake at night? That they will be ‘scooped’? Please. In 2012 in the age of Twitter? Hardly. After all, they all copy and paste the same PR releases and transcripts. Nope, what really gnaws at journalists is the fear that they will be exposed as flakes, dilettantes, copycats and pretenders.” — The Failed Estate

Some people search for “the Holy Grail of journalism” – and all they keep coming up against is a band of “French k’niggets”?