Linda Wolverton writes: Re. “They’re The Voice, but understand it’s not just Nine cashing in”  (Friday, item 5). I cannot believe that this article was even published! Obviously Tom Cowie’s only concern is in regards to the money being earned and distributed; do we detect some jealousy there? Of course money is involved, after all television is in the business to entertain AND make money or it wouldn’t exist. Inaccurate reporting and unfair innuendos about the people involved detract from any article. Why not develop the idea of how the talent and value of such a show dominates and how the positive coaching — instead of harsh criticism — have created the real interest in this show?

This comment is more than derogatory; this is downright insulting!

“And then there’s the judges: Seal, Keith Urban, Delta Goodrem and Joel Madden. While they may not quite be the megastars Nine has made them out to be (only Goodrem has had a local No.1 hit this past decade), the quartet would be taking home a decent wage.”

What an insult to these world-renowned and extremely gifted artists who are the coaches on Channel Nine’s successful music show.

Is Cowie unable to do research, or is he just too lazy to do so?  Obviously, Cowie knows only a bit about Australian artists … and not much at that!  He hasn’t researched their commercial successes or awards at all, from the sound of this article!

Most Americans have never heard of Delta Goodrem, but alas, with a bit of research … I, personally, learnt quite a bit about her, too. She’s like Keith Urban, a child musical prodigy, who has had massive success in her home country of Australia, no less. Too bad that isn’t mentioned.

Here’s some “current” info about Urban’s recent successes in Australia … and it wouldn’t take a rocket scientist to check on the “facts” for the other artists, either.

What do these extremely talented and gifted artists have to do to gain the respect that they deserve … and in their “home country”? Personally, I would think that Cowie would do more to prove why they are the respected artists who were selected for this musical reality show… and why they have helped to create such a highly successful production.

After all, the first night’s ratings were a total product of the coaches’ ratings, as no one had heard the voices of those who were participating in the auditions yet.

Perhaps some research and fair reporting about why this show is such a success would benefit the readers more, rather than some guessing at the monetary benefits.

“To take these positions and stick with them no matter what means closing your mind to the substantive issues of failure of media performance and lack of genuine accountability, which is what too many people in the industry have been doing for too long.”

What failure of media performance? News Corporation has succeeded brilliantly, on its own terms, in a work of corporate genius. It has acquired immense monopoly power in some of the wealthiest countries in the world. It can destroy, intimidate or blackmail almost anyone it cannot bring into line with promises of favourable coverage.

With the assistance of like-minded media owners it has poisoned and trivialised public discourse; put such fog and confusion into serious issues that the public has no idea what to believe; and brought representative democratic politics into unprecedented disrepute. It has helped vested interests undermine science, logic and rational thought as it might apply to policy to the point where any politics of substance is failing — the politicians cannot communicate such policies even if they have them, and the public does not believe them anyway.

Politicians are left like contestants in a third-rate reality show run by News Corporation and its accomplices. While the politicians are largely impotent and the general public is kept in the dark, the rich and powerful, including the Murdochs, are free to wage their class war against everyone else more or less unopposed; the rapidly increasing gulf between the very rich and everyone else, along with the reversal of social mobility, tells the story.

The “lack of genuine accountability” is another brilliant success. It has taken News Corporation decades to achieve, patiently chipping away at each commercial, regulatory or legal obstacle in the countries it has come to dominate.

So, my point is that “closing [its] mind” to these “substantive issues” is the last thing News Corporation would do. It is because it takes these issues extremely seriously that it must fight so hard, even against such relatively minor change as Finkelstein’s review recommends.

Luke Walladge writes: I’m sorry to tell Les Heimann (May 17, comments) that he’s missed the point. It’s all a great laugh banging on about “factions”, no doubt, but what does that actually mean?

Factions are, of course, nothing more than groups of … members. Members who associate together through a community of principle, belief and yes at times ambition. Twas ever thus in the affairs of human beings and ever will it be. And as for primary elections fixing this constant of human behaviour, as my article pointed out — it won’t.

What primaries will do is actually serve to entrench all those people Heimann doesn’t like, as well as disenfranchising the union movement, beggaring Labor, reducing the ALP to a brand as opposed to a party and actively emasculating the membership itself in a way no factional bogeyman could ever manage to do.

In any event the influence of “factions” and unions in the ALP is vastly overblown by those who have an agenda of their own; to increase their control over the direction of the ALP. This includes former and present leaders, those who would desire to lead the ALP themselves one day and a motley grouping of, wait for it, factional interests.

To again take the example of WA Labor, with a membership of about 3000 and 160 “member” delegates to state conference, a quota to get elected is a mere 19 votes per delegate. Given that a minimum 20 members is required to form a branch it is a simple matter to either start one’s own branch or gain 20 votes from an existing one, through intelligence, application and only a little bit of hard work. I might suggest to Heimann that if one can’t get 20 people to join one’s branch, or manage to convince 20 existing members to vote them in to a state conference, perhaps the fault lies somewhere other than in the system.

No process is perfect, the ALP included. The present system may not be ideal, but primary elections give everyone the worst of all possible worlds and as such should be rejected out of hand.

Niall Clugston writes: Re.”Richardson: how to count the unemployed?” (Friday, item 10).  I’m not sure what Gary Morgan’s unemployment figures are really measuring. As opposed to the ABS, which requires the “unemployed” to have looked for work in the past month (which is necessarily to qualify for the dole, anyway), he wants to include people who have looked for work “no matter when” — that’s right, “no matter when”. Is this serious? The only wonder is why his figures aren’t even higher.

The second complaint with the ABS figures is the issue of underemployment.  However, there is no simple statistical way of differentiating the spectrum of people with less than full-time work, which includes those happy with their hours, those who would quite like to pick up more, and those who are desperate.

Finally, Morgan has an opinion poll (essentially a survey about a survey) that supports his figures against the ABS figures. So what? Most people usually believe bad news over good, and most people don’t understand statistics anyway.

Surely the best approach is to use the ABS figures because they are rigorous and consistent, while keeping in mind that they are based on a tight definition and only an estimate. No, they are not “compassionate”, but no statistic ever is.

Andrew Reid writes: Re. “Anti-gay doctor falls on sword as religious links mount” (May 15, item 3). I’m a long-time Crikey reader and usually enjoy the robust and insightful articles you publish. However, I was really disappointed to read Andrew Crook’s article about Dr Kuruvilla George. I thought it was a hatchet job on Dr George, and replaced actual journalism with Google searching.

My specific complaints are:

I understand Crikey has a more robust approach to its articles than mainstream media outlets, and there is often a mix of news and opinion within its articles. However, it is not an individual blog where you can say what you like. It is a news and opinion site employing professional journalists to provide balanced coverage, whose assertions should be backed up with solid evidence and reasoning. In my opinion, this article failed on both those counts.

Rory Robertson  writes: It’s nice that Adam Schwab (Friday, comments) is unconcerned that his fact — in this case, housing turnover per annum — was shown to be out by a factor greater than two.  And now he’s keen to correct me on the Canberra-to- Kosciuszko  bet on house prices I agreed with Steve Keen nearly four years ago.

In fact, the bet turned on whether or not the “peak to trough” fall from Steve’s chosen “peak” of 131.0 on the ABS house price index was less than 20% (Steve walks) or at least 40% (Rory walks). In the event, the index fell by 5.5% (chart) before zooming to new highs on the back of 4 percentage points worth of mortgage-rate cuts and a sharp turnaround in the economy.  Steve walked in 2010 and I’ve congratulated him in person on a job well done.  Also, I’ve said I will walk if average house prices ever fall by 40% from any future peak. 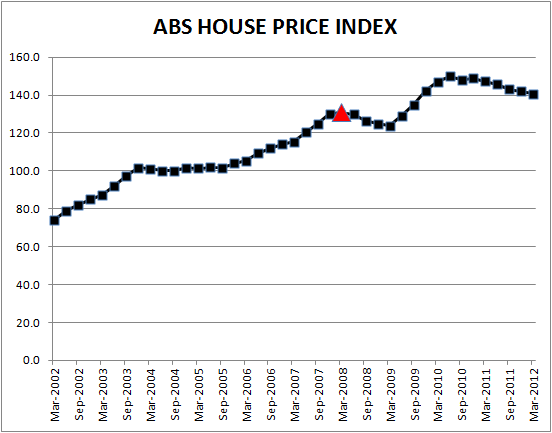 I’ve already dropped 10 kilograms in advance of any future challenge — how I did it is documented at www.australianparadox.com — but before I ever break into a sweat in training, let’s wait and see if prices ever fall back to Steve’s previously forecast “peak” (chart).

Finally, I’m not sure why Schwab thinks I have a particularly “bullish” house-price view. Yes, I own a house and I live in it. Beyond that, I just try to keep my eyes open. I note that auction-clearance rates in recent weeks in Sydney and Melbourne have come in closer to 60% than the low-to-mid 50s seen previously.

Joe Boswell – it can sell “(PR) protection” too.