After five games of the 2012 world title match in Moscow between Anand and Gelfand, it seems that the challenger is trying to implement a defensive wall strategy, writes Australia’s first Grandmaster Ian Rogers from Moscow.

When Vladimir Kramnik took on the seemingly unbeatable Garry Kasparov in the world title match of 2000 in London, he modelled his play on the Czech ice hockey team, which had beaten the great Canadian team on its way to an unexpected gold at the 1998 Nagano Winter Olympics.

The Czech team featured a near invincible goaltender, Dominik Hasek, and Kramnik decided that stopping Kasparov putting the metaphorical puck in the net was the only way he had a chance against the world champion of the previous 15 years.

Kramnik’s defensive wall strategy paid off. Kasparov beat his head against it without success when playing white and let his guard down twice with the black pieces, enough for Kramnik to win the match title, which he kept until beaten by Viswanathan Anand in 2008.

After five games of the 2012 world title match in Moscow between Anand and Boris Gelfand, it seems that the Israeli challenger is trying to implement a similar plan — make your defences impregnable and your higher-ranked opponent will eventually lose patience and falter.

Anand has tried to vary his tactics but nothing seems to be working against Gelfand. Like flooding in the AFL, such a defensive strategy is hardly pleasing for the spectators and the five consecutive draws — Thursday’s game lasting just 100 minutes instead of the standard 3-4 hours — have drawn criticism from many quarters.

Some pundits blame the players, some the influence of computers, some the match format, some the absence of anti-draw rules. At the post-game press conference on Thursday even Alexander Grischuk, the man narrowly beaten by Gelfand for the right to challenge Anand and now a commentator, was offering suggestions to Anand to enable him to keep the game alive. Anand listened politely but Gelfand, suggesting an unexpected reply, demonstrated that Grischuk would not have breached his defensive wall.

What seems to be forgotten are that world championship contenders are only incidentally entertainers. When the stakes are high — as here with a world title that has changed hands only 14 times in history, plus $1.5 million going to the winner — their sole focus is on winning.

The real change is that only recently have more than a select few been able to watch the games live. In decades past, only the hundreds of people able to visit the playing arena would go home unsatisfied if the fight was less than full-blooded. Most people would have to wait until the journalists — as many as 900, outnumbering the spectators, at the 1986 world championship match in London — brought the general public the highlights the next day.

In 2012, hundreds of thousands around the world log on to watch every move live and expectations are much higher.

With the world title match of 12 games almost half over, it is becoming clear that a single mistake could now cost the world title — there might be no time to break back. Up to now, Gelfand, 43 and probably enjoying his one and only chance to win the world title, has shown no sign of nerves. As he gets closer to his goal, expect Gelfand’s wall to start to show some cracks. 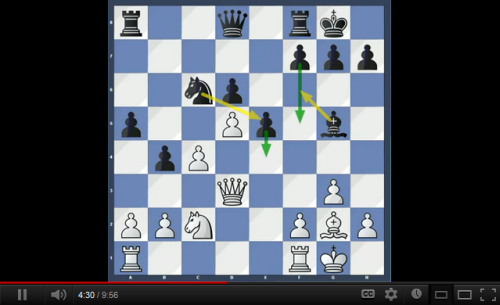 The first surprise — in world title matches Anand has played 1.d4 almost exclusively. However, as Gelfand said, “If you prepare for a world championship match you have to be ready for 1.e4 — it is very likely to happen at some time.”

Now it is Gelfand’s turn to baffle Anand. Black’s Pelikan system — named after the Argentinian player, not the bird — is well reputed yet it has never formed part of Gelfand’s repertoire.

“I imagine that neither one of us succeeded in surprising the other,” admitted Anand after the game.

Once again Gelfand comes up with an idea that had scored very poorly in the past yet is far better than its reputation. 14 … Ne7 used to be Black’s main line.

The Grandmaster commentators were keen on 23.Qc4!?, intending 24.Qc6 but Gelfand was intending 23…Qc5 with a tenable endgame.

“I never really considered 26.b3!?,” admitted Anand, who by now had resigned himself to a draw. Gelfand was confident that even if White eventually rounded up the a2 pawn after 26.b3, Black’s bishop would arrive on c5 and mitigate any damage.

The sixth world championship game will be played on Friday starting at 9pm AEST.