Reform and the ALP

Crikey says: Re: “Media briefs: US TV hit list … ACMA v Sandilands … GetUp! ad snub …” (yesterday, item 17). Andrew Murfett, the Green Guide editor for The Age, points to similarities in Glenn Dyer a “Media briefs” item yesterday on the US TV “upfront” presentations and a story he wrote for the paper. We acknowledge the similarities but are assured by Glenn they are coincidental after reading the Age piece and conducting his own research.

Glenn Dyer writes: As part of the research for yesterday’s Crikey I read online a story on the Fairfax websites that was similar to the one I was preparing. I should have linked to it because it was part of the research, not the basis of the story, which I try to do this time each year and based on the US networks’ upfronts (plus the programs that have been renewed or killed off, plus the new shows drawn from pilots made by various production companies) and the subsequent Los Angeles screenings for Australian networks (which start tonight, Thursday, our time). This website was my primary source. I have been monitoring it for the past 10 days and watching the various networks make their announcements. The programs from the website in both the Fairfax report and my report were similar. There were others from earlier reports, such as The Simpsons and Merlin. I also had information from local network sources.

My fellow Labor tragic considers public primaries as “intellectually lazy” and disenfranchising unions (whom he considers the ALP cannot do without) and of course, members.

I’ve got news for Luke — rank-and-file ALP members have, for the most part, been disenfranchised for years.

It’s all about organised factions — these groupings of like-minded power-hungry people have strangled every drop of democracy out of a once great political party. It is they who decide preselections, in fact they decide bloody everything.

I can’t blame people in the ALP who genuinely want reform — and that means destroying the ruling oligopoly — for proposing a more open and inclusive system for preselection.

I agree with Walladge that this minimises membership and union influence but hell, what good is it now?

Justin Templer writes: Re. “Richard Farmer’s chunky bits” (yesterday, item 12). I would be grateful if the Prime Minister could define who “working people” are and, in particular, “decent working people”.

In the bank where I work, I interact with a range of people, some on $50k and others on $1m.  Some have families, others not. They are all working people and, with a few exceptions, decent. Some belong to a union. Are they inside the circle or outside? Perhaps our Prime Minister could draw us a Venn diagram so we know who she cares about?

Rory Robertson writes: Re. “RBA has no idea just how the housing market works“(yesterday, item 20). If Adam Schwab wants to pretend that he knows everything about housing markets and the RBA knows nothing, he needs to avoid obvious mistakes that reveal him to be the one with no idea.

He claims that “only about 10% of dwellings [are] changing hands annually”. In fact, housing turnover at about 4% today is less than half of Schwab’s estimate. For his information, the RBA estimates that the range for housing turnover in recent decades has been 4-8% per year, and we’re near two-decade lows at present. 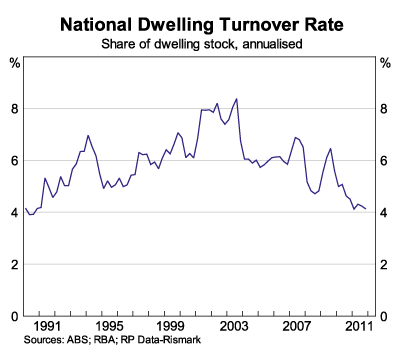 Schwab might want to take the time to absorb the RBA’s extensive analysis on local and global housing markets over recent decades before he pretends to be more knowledgeable on the topic.

As a writer, being “often wrong but never unsure” only works well when your audience is clueless. For a regular contributor to Crikey, it doesn’t work at all.

The intelligent option would be for PM Gillard to refer to us as Australians – minus the adjectives.