Kirsan Ilyumzhinov used to be president of the impoverished Russian Republic of Kalmykia but now seems to have adopted the role as roving ambassador for Russia in countries ruled by despots, writes Australia’s first Grandmaster Ian Rogers from Moscow.

Halfway through Tuesday’s fourth game of the World Chess Championship in Moscow between defending champion Viswanathan Anand and challenger Boris Gelfand, a tall, charismatic figure passed through the press centre heading into the VIP room.

The man, glad-handing all who came near him, was Kirsan Ilyumzhinov. Despite the embarrassment of playing a game against Eric Campbell on Foreign Correspondent with his king and queen set up wrongly, Ilyumzhinov has headed the world chess body FIDE for 17 years.

Ilyumzhinov used to be the president of the impoverished Russian Republic of Kalmykia but now seems to have adopted the role as roving ambassador for Russia in countries ruled by despots.

When Ilyumzhinov was supported by the Russian Chess Federation and government for the most recent FIDE presidential election campaign against two Russian icons, former world champions Anatoly Karpov and Garry Kasparov, it was clear that Ilyumzhinov has friends in all the right places.

For many years Ilyumzhinov claimed to be mates with Saddam Hussein. He brought him Kalmykia caviar — “It will make you big and strong,” he told a bemused Hussein. He granted Iraq the right to host the 1996 world championship match, until the challenger, a US Grandmaster, objected and the match was moved to the Kalmyk capital Elista. And he was one of the last foreigners to visit Baghdad days before the 2003 invasion of Iraq began.

Last June Ilyumzhinov could be found in Tripoli challenging Muammar Gaddafi to a game of chess. (Ilyumzhinov had been on good terms with Gadaffi since 2001 and Ilyumzhinov handed Libya the 2004 World Knockout Championship, an event that necessarily excluded Gelfand and his Israeli compatriots.)

Having a visit from Ilyumzhinov was, however, beginning to seem like a mixed blessing. Hussein had survived for three years after Ilyumzhinov’s visit; it was only four months post-Ilyumzhinov before Gaddafi was dead.

Aiming for a trifecta, three weeks ago Ilyumzhinov found himself in Damascus, convincing Bashar al-Assad to start a chess-in-schools program, announcing an Arab youth championship in Syria, offering his expert opinion that Assad plays chess very well (and also mentioning that the Syrian opposition were in fact paid mercenaries and that he supported Assad’s commitment to the UN peace plan).

Like many successful politicians, Ilyumzhinov has a genius for “feeding the chooks” — making sure that the press are preoccupied with his latest outrageous exploits so that they don’t investigate serious issues.

Ilyumzhinov’s announcements and pronouncements are legion: “Chess will soon be part of the Olympics” — refuted regularly by the IOC; an $8.6 billion plan for Dubai to build 32 high-rise buildings in the shape of chess pieces — announced in 2007 and soon forgotten; plus the old standby “I was abducted by aliens” or its cousin “Chess was brought to Earth by aliens”.

The strategy is strikingly successful. While in a sane world Ilyumzhinov would be investigated for the political killings for which he is alleged to be responsible while President of Kalmykia, instead he is challenged by a member of the Duma (Russian Parliament) over whether he gave away state secrets to the aliens while abducted.

Ilyumzhinov took over as head of FIDE promising to heal the split in the chess world, which had two players claiming to be world champion.

The split was not resolved for a decade, during which time Boris Gelfand admitted that he had simply given up trying to become world champion. Ilyumzhinov had devalued the FIDE title to the point of randomness, while Kasparov’s breakaway organisation collapsed and Kasparov simply chose his challenger.

More recently, 21-year-old top ranked Norwegian Magnus Carlsen dropped out of the current world championship cycle in disgust at the unpredictability of the qualifying series.

Carlsen’s absence made Gelfand’s task of qualifying to meet Anand just a little easier, although even without Carlsen almost no one expected the 43-year-old Israeli to survive the elimination qualifying series.

Gelfand is making the most of his unexpected opportunity, holding Anand to a fourth consecutive draw on Tuesday, though Ilyumzhinov did not hang around to see much of the struggle. It is unclear whether Ilyumzhinov even likes chess — but he likes being president of FIDE, a sporting body with 158 members and a high status position, especially within Russia.

Anand and Gelfand are currently tied 2-2 in the best of 12 contest. In general the match is still developing, said Anand. We are still probing. So far it has been a pretty tough match. 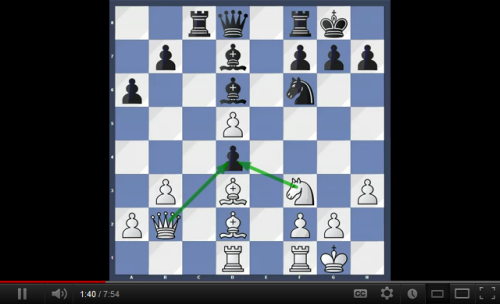 Repeating the sideline which served him well in game two. This can be a risky strategy if Gelfand and his team have found a hole in even one variation of your chosen defence, but Anand has confidence in the resilience of his system.

Gelfand tried 10.Rc1 in game two; now he returns to the main line.

Until here, both players had been playing quickly, following their home preparation but now Gelfand, having run out of constructive moves, finally agrees to the liquidation of the centre pawns. Anand’s opening choice has been a success.

Optically White is better with his bishop pair, Gelfand explained, but White’s pieces are not co-ordinated in the best way.

Since 24.Bxf6 gxf6 is rock solid for Black, Gelfand must try to make something from nothing.

Anand felt that 32.Rc6 was stronger, but Black’s king can enter the game in time and he still holds comfortably.

Now Anand was confident that his position was impregnable, and Gelfand soon agrees.

The fifth world championship game between Anand and Gelfand will be played on Thursday, starting at 9pm AEST.

I don’t know much about chess but gee, reading these reports is entertaining