From the Crikey grapevine, the latest tips and rumours … The day Brisbane turned into Pyongyang. Seems the new Premier has upset a few people up north today. “Kim Jong Newm-Un brings Brisbane City to a grinding halt today for the opening of Parliament this afternoon,” writes one sunshine state resident. “Usually vehicle traffic stops for […]

The day Brisbane turned into Pyongyang. Seems the new Premier has upset a few people up north today. “Kim Jong Newm-Un brings Brisbane City to a grinding halt today for the opening of Parliament this afternoon,” writes one sunshine state resident. “Usually vehicle traffic stops for about half an hour, no pedestrian restrictions. Everyone [is] already an hour late for work. At 9.15am the Cultural Centre bus stop [is] full of whingeing people because they have missed their connections. The city is swarming with police. Brisbane, aka Pyongyang,” says our northerner.

On May 10 Queensland University of Technology staff were sent a memo advising of likely access difficulties:

“Notice for Staff re access to QUT. Notification has been received that George Street will be closed to all vehicular traffic between Alice Street and QUT between the hours of 6am and 4pm on Wednesday 16 May 2012. This closure will facilitate the Ceremonial Opening of Parliament. Whilst Alice Street will also be closed for a short time between 1.25 and 1.45pm, this closure will have a minimal impact on the operation of the 391 shuttle service to KG. “

Then on Monday another notice was sent to QUT staff outlining even more difficulties with access due to the opening of parliament:

“An updated notification has been received from the Parliament advising that pedestrian access will be restricted in to the George Street forecourt entrance to QUT from 12.30pm – 2pm on Wednesday 16 May 2012. During this time all pedestrians will be directed by police to access QUT via the Botanic Gardens during this time. As this will now affect those arriving by the 391 bus a sign will be placed at the bus stop noting that from 12:20 and 2pm to remind everyone of the event and the detour in place. This closure is due to the Ceremonial Opening of Parliament.

Time for some head hunting. Which large IT and telco recruitment agency is charging candidates a 2% fee of their daily wage to cover admin costs of paying the successful applicant’s PAYG salary, as well as charging client company their normal fee?

“Our CEO has just headed off overseas and we don’t have a comment at this stage”, said LUCRF spokesperson Lee Sammartino when we called to ask what was going on. So is the case involving a customer or a staff member? asked Crikey. “No comment,” replied Sammartino. A quick Google search found the person mentioned in the VCAT hearing list was a former staffer from its marketing and communications department.

Housing developers want your money not your questions. Which housing developer is getting slammed by home buyers calling its customer service “virtually non-existent once you sign the contract and hand over your deposit”? “Each region has a dedicated customer service rep but they never answer their phone and never return calls,” says our spy. “Numerous customers are left in the dark whenever they have even a basic query about their home.” Things heated up on Friday:

“This frustration came to a head on Friday when a customer and his wife walked into headquarters and demanded to see their customer service rep, who had not returned a single call from the couple. The rep refused to come downstairs and speak to them, telling reception to instead “take a message”. The man, clearly at the end of his tether, demanded to speak to someone. A customer service rep from an entirely different region came down to speak to them, but it obviously didn’t go well as the customer began yelling and ultimately threw the table they were sitting at in a meeting room.

He proceeded to get very angry and threatening, at which point managers and reps from upstairs came down to see what all the fuss was about, but not one of them tried to intervene or calm the situation, instead leaving the solitary female receptionist to try and quell the man’s rage.

Finally subdued, [a staffer who is related to the founder] had the audacity to tell the receptionist that it’s unacceptable to allow customers to behave like that in an area where other customers could see them.”

Crikey contacted this housing developer to see if the story stacked up. After five minutes on hold, we were passed on to the general manager who told Crikey that he didn’t know us from a bar of soap and we couldn’t just call up asking questions and demanding answers. Eventually he agreed that we could email him the details and he would get back to us before deadline. Surprisingly, we’ve had no response …

The writing on the wall. Despite huge fall in readership of men’s magazines in the last audit, apparently one well-known men’s mag editor is telling anyone who will listen that he is in line for a big promotion and that a “big door is about to open up for me”. Hopefully that won’t be the same door that opened for the editors of Ralph and FHM …

Not very appy with The Oz. “With all the staff cuts and other shenanigans in the higher education system, it would be nice to have up-to-date news on what’s going on. What a pity The Australian hasn’t updated the higher education stories on its app for more than a week. Since before the budget, in fact,” one education watcher tells Crikey. And yes, this tip checks out; check out The Oz‘s Higher Education page on the iPad app this morning. Every other section seems to have been updated, just not higher education. 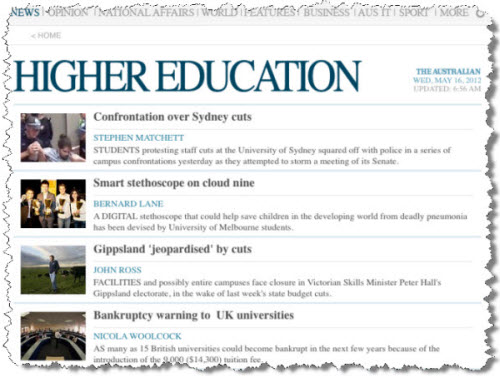 The top two stories are from May 8. “Even today, the regular day for the higher education section, there is nothing new,” notes our tipster. “But the website is still updating … still sorting out the challenges of new media?”

Balmain AFP watch continues. Crikey first reported it months ago, but apparently the Australian Federal Police are still keeping a close eye on a building in Balmain (rumoured to be the Iran or Syrian embassies and the office of the Irish Echo) “The building certainly does house the Syrian consulate,” one Balmain bug tells us. “He is a very nice man who is also my tax accountant. Very interesting that the speculation is that they are keeping an eye on the goings on in Balmain. Can’t imagine what anyone would do in such a quiet spot but they’ve been there for some few months now so something is clearly going on.”

SBS football ads over news? “Some incompetent fool at SBS pushed the ‘more ads’ button instead of the ‘sports report’ button during the World News bulletin in Adelaide tonight (May 15),” writes one angry SBS viewer. “So, instead of getting my fill of non-mainstream sport for the day, I copped an extra load of SBS self-promotion.”

We tried to get the footage, but could only access Sydney’s, where there was a brief ad for a soccer match between the end of the regular news and the start of the sports news (scheduled, going by the comments of the newsreaders), but the rest of the sports news broadcast for Sydney was without any further promotion. Not that crazy we thought. We’re still waiting to hear back from SBS, but this angry tipster still has an axe to grind.

“Just what are you doing with that huge wad of cash you’ve just been given, Mr [Michael] Ebeid? Not maintaining the quality of your flagship news service, that’s for sure. Piss poor effort, SBS.”

Get ready for an election? According to one political watcher: “Expect another Labor scandal, and a general election to be announced within 60 days. Judging by the reluctance with which the source parted with this info, there might be something to it.” Stay tuned …

Oh !! Is that what happened to the traffic this morning ! An hour and a half trip from eastern suburbs (that usually takes 30-45)! SNARL (http://queensland.snarl.com.au) this morning mentioned police activity in South Brisbane – but didn’t mention Can-Do-anything-he likes ! 🙂